Get the newsletter now
Algeria

Algerians take to the streets in biggest government demonstration

Hundreds of thousands of Algerians marched in cities across the country on Friday in the biggest protests yet, dashing regime hopes that President Abdulaziz Bouteflika’s pledge not to seek a fifth term would end the demonstrations.

After weeks of mass protests, Mr Bouteflika, who has been incapacitated since a stroke in 2013, said on Monday that elections scheduled for April 18 would be postponed and he would not stand for re-election. He said instead that he would oversee a transition period.

But many of those who have taken to the streets believe the concessions were a ploy by the ruling elite to buy time to install its chosen successor.

The demonstrations on Friday — the start of the weekend in the north African state — were viewed as the first test of popular sentiment after the government’s concessions were announced.

In Algiers, the capital, hundreds of thousands of people packed into the city centre, many waving national flags and holding placards with slogans that demanded the 82-year-old president step down when his term officially ends on April 28.

“Take a rest Bouteflika and go to sleep, we have closed the door on your era,” read one of the signs. Demonstrations were also held in cities from Batna in the mountains in the east of Africa’s largest country, to the port of Oran in the west. 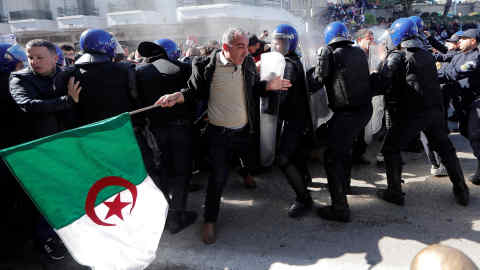 Mr Bouteflika promised this week to oversee a political transition that would draft a new constitution and set another date for the presidential election.

The under-pressure government was also reshuffled this week in a bid to give the regime a new look. This included the dismissal of Ahmed Ouyahya, a much-hated three-time prime minister. He was replaced by Noureddine Bedoui, who said on Thursday that the transition would be completed within a year.

But Mr Bouteflika’s support base appears to be crumbling with senior businessmen, veterans of the war of independence from France and even some leaders of the ruling FLN party abandoning him.

The protests began three weeks ago and are the largest in Algeria for decades as they have taken on a national tenor. During the 2011 Arab uprisings, the government was able to stem localised protests by pledging political and economic reforms.

But the regime’s decision that Mr Bouteflika — who has not spoken in public since his stroke six years ago — would seek a fifth term united the entire country in protests over what many Algerians view as an insult.

The protests in Africa’s top gas exporter have been overwhelmingly peaceful, with both the demonstrators and the security forces showing restraint.

Get alerts on Algeria when a new story is published