Could the NHS be part of a US-UK trade deal?

Donald Trump made a number of contentious statements during his visit to Britain this week, but his assertion that the UK’s National Health Service would be “on the table” in discussions about any post-Brexit US-UK trade agreement was by far the most controversial.

Britons see their taxpayer-funded, free-at-the-point-of-use health system not just as a source of medical treatment but as a vital expression of national values of equity and compassion. The US health system, in contrast, is reviled as its antithesis because it links treatment to the ability to pay.

The reality is more complex, but even though Mr Trump appeared to row back on his statement, there are concerns about what any prospective new UK-US trading arrangements could mean for the health service.

How much private sector involvement is there in the NHS?

Despite the common idea that the UK health system is a public sector endeavour, the private sector — including American-owned companies — already plays a significant role.

Data prepared last year for the Financial Times by John Appleby, chief economist of the Nuffield Trust think-tank, showed that in 2017-18 the NHS in England spent £13.1bn on care provided by non-NHS organisations — equivalent to 10.9 per cent of the health service’s total expenditure that year.

More than two-thirds of this was spent on care purchased from the private sector.

Would a trade deal increase the role of the US?

Mark Dayan, Nuffield Trust policy analyst, pointed out that even under current UK and EU procurement rules, US companies are guaranteed the right to tender for contracts in England as long as they have a presence within the EU. He cited the US-owned Priory Group, which has a significant role in providing mental health services to the NHS, and Centene UK, a technology and logistics provider and subsidiary of Centene Corporation, which works with some GP practices.

However, he said, it was possible that a US-UK trade deal could reaffirm the role of American companies in Britain’s health service by “effectively introducing a third layer of guarantees” that they should have full access to NHS contracts.

What remains unclear is whether a trade deal could impose restrictions on a future government’s ability to bring contracts back into the public sector, on the grounds that this would be a form of expropriation of American assets.

Any deal that might create such limitations would be highly controversial as it would potentially tie a future government’s hands on a key area of domestic policy.

Mr Dayan said that current EU trade deals include provisions that protect the UK government’s right to reverse policy on the use of non-NHS providers if it chose — and securing a similar guarantee could be part of negotiations for any future bilateral deal with the US.

Is the free-at-the-point-of-use model in danger?

It is hard to see how patients could be forced to pay for services that are currently free, even if US companies had a bigger role. Politicians would be wary of a voter backlash by making such a fundamental change to the UK’s 70-year-old funding model.

While some recent opinion polling has shown the majority of people are agnostic about the source of their provision, provided it is of high quality, only about a quarter back charging for GP services or hospital meals.

Could the NHS be forced to pay higher prices for drugs?

The “low and slow” uptake of medicines by a cash-strapped NHS is a perennial subject of complaint by large pharma companies, particularly those with headquarters in the US.

The former UK head of Pfizer, Erik Nordkamp, wrote in the FT last year that patients in countries such as France, Germany, Japan and Switzerland “benefit from 75 per cent more treatments in the year after their launch than are available in the UK”. 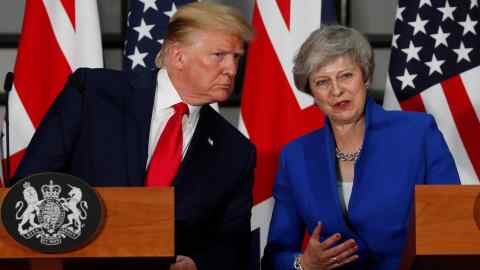 Separately, President Trump has delivered some fiery rhetoric as part of a much wider push to reduce drug prices for patients, last year accusing the rest of the world of “freeloading” on the US.

An outline of negotiating priorities for a US-UK deal, issued by the office of the US trade representative in February, included a section on “procedural fairness for pharmaceuticals and medical devices” that vowed to “seek standards to ensure that government regulatory reimbursement regimes are transparent, provide procedural fairness, are non-discriminatory, and provide full market access for US products”.

Steve Bates, chief executive of the BioIndustry Association, whose members are biotech and pharma companies, noted Mr Trump’s apparent change of heart overnight about the extent to which a trade deal would feature the NHS, suggesting he had “begun to grasp some of the complexities of any US/UK trade negotiation involving the health sector”.

He added that comments from Conservative leadership contenders and the Labour leadership suggested there would be “significant UK-US contention on issues like pricing and market access in any proposed pharmaceutical chapter of any trade deal”. However, since trade negotiations typically took between seven and 10 years, “Mr Trump’s own mandate may well run out before any deal is finalised”, he added.