We’ll send you a myFT Daily Digest email rounding up the latest Theatre news every morning.

Romantic comedies usually begin with flirtation and move on to consummation. In this 1987 play by Terrence McNally, the eponymous middle-aged couple get right down to it. As the lights go down here, we glimpse Frankie and Johnny cavorting naked in the former’s poky Manhattan apartment, backed by the strains of Bach’s Goldberg Variations whispering from a bedside radio.

As far as she’s concerned, that’s probably the end of it. But he refuses to leave, while offering increasingly emphatic declarations of affection. In Michael Shannon’s oddball portrayal, that persistence seems by turns endearing, pathetic and more than a little intimidating. Johnny’s feelings for Frankie are patently genuine, but the potential for violence lurks throughout Arin Arbus’s thoughtfully paced staging (135 minutes with an interval). That the pair share their names with the title of a song about a woman who murders her lover further adds to an ambiguous, unsettling aura here.

Whereas Shannon’s Shakespeare-quoting short-order cook wears his heart on his sleeve, Audra McDonald’s Frankie, who works alongside him as a waitress, is more guarded. Bruised both emotionally and physically by previous relationships, she is torn between an instinct for self-preservation and the realisation that Johnny’s loopy overtures may be the best she’ll get.

It is hard to suspend disbelief at seeing McDonald, who holds a record number of Tony Awards for a performer, in the role of a diffident failed actress, which was originally played by Kathy Bates. And her dialogue at times seems overwritten for a character who doesn’t know the meaning of the word “peccadillo”. But the costume, hair and make-up departments have done their best to dial down McDonald’s high-wattage glamour. And she ultimately cuts a plausibly luckless figure who’s been chewed up by life in the big city.

Notwithstanding its 1980s setting, McNally’s story of hesitant romance and muted desperation still seems fresh. As suggested by the music at the start, it is a variation on an eternal theme. And while Frankie and Johnny end up listening to the swooning strains of Debussy’s “Clair de Lune”, it is Bach’s more mercurial composition that best sums up the play’s equivocal mood. 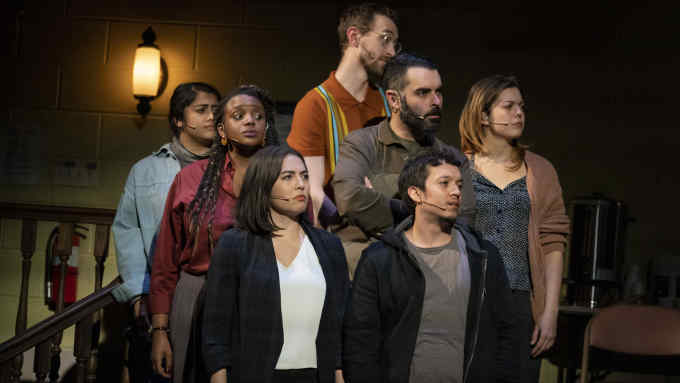