Lael Brainard, a Fed governor in the political glare

In the middle of meetings of the world’s central banking elite in Wyoming’s Jackson Lake Lodge in August 2015, Lael Brainard sat down with activists who were denouncing calls for tighter monetary policy amid America’s sluggish wage growth.

As the Federal Reserve Board member listened intently over the course of about an hour, protesters from New York ranging from fast-food employees to a worker on film sets talked about the difficulties of making ends meet on rock-bottom wages in a high-cost metropolis, recalls Shawn Sebastian, field director of the Fed Up coalition that arranged the meeting.

Ms Brainard’s decision to drop by carried a message. A fairly new member of the Board of Governors who had said relatively little about monetary policy, Ms Brainard was about to set out her stall as a vocal advocate of low interest rates at the Fed — based in part on the absence of wage growth.

Her steadfast calls for continued economic stimulus have burnished her credentials among pro-worker groups including Fed Up, which met a broader range of Fed officials at this year’s Jackson Hole gathering. They come amid speculation that she could be in line for a cabinet role if the Democrats hold the White House in November.

“When it comes to monetary policy, Lael Brainard is one of the strongest and loudest voices advocating for policies that working families across the US need,” says Mr Sebastian.

In Washington, Ms Brainard is being spoken of as one of the candidates for Treasury secretary in a Hillary Clinton administration — a move that would make her the first woman to head the department. At the same time she has become the target of Republican attacks because of her public support for the Clinton campaign and fury within the party over easy-money policies.

Early this year Ms Brainard donated $2,700 to the Clinton campaign, a decision described by former officials as a blunder for a sitting Fed governor during an election year — even if it is permissible under Fed rules. It increased the Fed’s political vulnerability at a time when it is a prime target for vituperative assaults on its independence by Donald Trump, the Republican presidential candidate.

The donation was the subject of sharp exchanges in Congress last month as Fed chair Janet Yellen was forced to reject claims by Republican representative Scott Garrett that the central bank is excessively cosy with the Democrats.

Ted Truman, a former Fed official who is a non-resident senior fellow at the Peterson Institute for International Economics, says Ms Brainard’s donation was a personal mistake that “didn’t help the Fed at all”. He also argues that the issue pales in comparison with politically charged episodes in the past, such as the Nixon years when the Fed was leaned on heavily to keep rates low.

Ms Brainard’s forceful drive for easy monetary policy began two months after the 2015 Jackson Hole meetings, when she delivered a blunt speech that left some with the impression that she was at loggerheads with Ms Yellen. Ms Brainard warned against prematurely lifting rates amid slack in the labour market and subdued inflation — even as the chair was steering markets to expect a move by the end of the year.

Ms Brainard did not go on to formally dissent when Ms Yellen presided over a rate increase that December. Since then the two policymakers have appeared more closely aligned, with both recently arguing that the US recovery has further room to run before the central bank needs to increase rates again.

Ms Brainard has urged caution in part because of the risk that overseas shocks ricochet back to the US via highly integrated financial markets. This global focus builds on her work as the US’s top financial diplomat under former Treasury secretary Tim Geithner between 2010 and 2013, where in the gruelling post of undersecretary for international affairs she was a key US figure in discussions over the euro area debt crisis, as well as the broader global fallout from the financial crash. 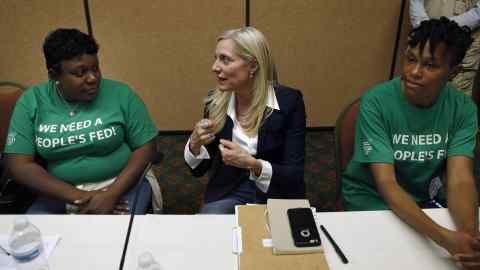 One official who spoke with her regularly was George Papaconstantinou, Greece’s finance minister from 2009 to 2011. He recalls hearing from Ms Brainard two or three times a week during the febrile days of early 2010, as Europe dragged its feet over how to handle the Greek crisis and the US pushed for action. The calls were partly “therapy” for him and partly information-gathering by Ms Brainard so she had “a better sense of how close we were to the edge”. He says: “She clearly knew her stuff.”

Ms Brainard, who declined to comment for this article, developed her interest for global affairs in part on the back of her upbringing as a diplomat’s daughter, spending some of her childhood behind the iron curtain in Poland and East Germany. A former MIT economics professor, she has three children and is married to Kurt Campbell, a former top state department official.

A reserved individual, Ms Brainard left the Treasury with a mixed reputation among officials, some of whom found her unsupportive and distant. Others, including Jared Bernstein, a former economic adviser to vice-president Joe Biden, praise her straight-talking manner and clarity of thought. “There are people who blather on and she is not one of them,” he says.

What gives Ms Brainard’s claim potency is not only her international and domestic economic experience, but also the helpful absence of a stint on Wall Street in her curriculum vitae. For many Democrats, her very public campaign for low rates has only strengthened her qualifications for the post.

Get alerts on Lael Brainard when a new story is published