Levi Strauss is as enduring as a pair of vintage jeans

Levi Strauss last went public nearly half a century ago, when the San Francisco-based denim jeans company launched an initial public offering in 1971. Both blue jeans and Levi Strauss have had plenty of ups and downs since then, but the company is venturing out again.

Its planned return to the New York Stock Exchange on Thursday is not exactly a triumph — adjusted for inflation, a 1996 buyback valued the company at nearly four times its anticipated IPO valuation of about $6bn. But Levi Strauss is like a vintage pair of jeans. It has gone through turmoil and been distressed but it has endured.

Great brands have this quality — they can be mistreated or stretched for years at a time but they have a strong enough identity to survive. Levi Strauss has had so many mishaps since its eponymous founder launched the first pair of riveted jeans in 1873 that it could have failed. It did not, thanks to its brand and the Haas family of Strauss relatives that inherited control in 1902.

Its leaders made many mistakes, but keeping the company growing consistently is a Herculean challenge. As its IPO filing notes, the clothing industry must adapt to “ever-changing fashion trends and consumer preferences” and is “subject to intense pricing pressure”. Globalisation both opened up new markets and subjected American brands to brutal competition.

Levi Strauss occupies the toughest market position of all — the squeezed middle. It competes both with cheap brands and fast retailers such as Forever 21, and with premium brands such as G-Star Raw and Diesel. It launched the cheaper Levi’s Signature brand in 2003 to sell through retailers such as Wal-Mart but it constantly has to face upward and downward.

I acquired my first pair of Levi’s 501 jeans when I was a teenager four decades ago, at a time when they were growing fashionable again. Buying 501s involved commitment — you first had to sit while wearing them in a bath, watching the indigo dye turn the water blue, to shrink them to fit. They took a long time to wear in, and the heavy button flies were never easy to fasten.

It was awkward, but it only made one value them more. Millennial consumers crave qualities such as authenticity, craft and traceability in modern brands, and 501s had them in spades. Mine were not the 10oz red selvedge denim made for 501s by Cone Mills in 1927 but they felt like the original copper-riveted denims with an arcuate stitching pattern on the rear pockets.

A few years later, I bought another pair and they felt like imposters: the denim came pre-shrunk and was lighter and thinner; the button flies were flimsier. They were called 501s but to anyone who knew, they were not the real thing. Levi Strauss had devalued its brand to cut costs and the Haas family had to rescue it by taking it private with a $1.6bn leveraged buyout in 1985.

Robert Haas, who held 10.5 per cent of Levi Strauss ahead of this week’s IPO, was then chief executive. His strategy of closing US manufacturing plants and reviving the brand raised its value to $14bn in a 1996 buyback of family equity. “How Levi Strauss did an LBO right,” Fortune magazine wrote in 1990. But the spurt did not last. By 1999, Fortune recorded its lost appeal to teenagers in a cover story: “How Levi’s Trashed a Great American Brand”.

It has been a similar story of downturn and revival under successive CEOs since then. The latest is Chip Bergh, a Procter & Gamble veteran who took the job in 2011, describing its previous leadership as “the gang that couldn’t shoot straight”. Mr Bergh has stabilised the core business of “men’s bottoms” and found growth in women’s denims and tops such as trucker jackets.

Its strongest expansion last year came in Europe, where sales rose by 25 per cent. Levi’s are enjoying another moment, after years during which people substituted “athleisure” such as yoga and track pants for jeans and chinos, including the company’s Dockers brand. The IPO is timed to exploit it and Mr Bergh hopes to regain, and then surpass, its 1996 sales record of $7bn. 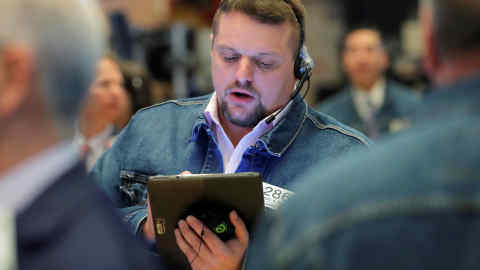 “I don’t see any glimmer of a reason why we would want to,” Mr Haas replied, when asked by Fortune in 1990 if Levi Strauss would ever return to the stock market. Time has passed and his family has changed its mind, but this is not the end of history. I expect it will be taken private again one day.

Even if Mr Bergh achieves his aspirations, Levi Strauss will remain a cyclical business, tied firmly to its origins. The athleisure market continues to expand faster than that for jeans, and denim is denim — no matter how soft and stretchy the company makes its Sculpt range of women’s jeans. A hard-wearing fabric intended to be worn to work by cowboys and miners in the US west will never be ideal for yoga.

But there are many worse competitive positions than producing the world’s best-known brand of jeans, with an unmistakable historic identity. If my generation appreciated the spirit of Levi’s 501s a century after they were invented, there is no reason why future teenagers will not. Levi’s are not always in fashion but they will always have the potential to become fashionable once more.