A unit of Hong Kong’s Jardine Matheson is expanding an Indonesian gold mine in the habitat of the world’s rarest great ape despite negotiations to halt deforestation pending a study on the project’s impact, according to people with knowledge of the discussions.

The mine is located in forests where fewer than 800 Tapanuli orangutans are believed to still live, although scientists say more research is needed to determine their current population. The Tapanuli orangutan is a species of the primate on the critically endangered species list of the International Union for Conservation of Nature, the global environmental protection organisation.

After Jardine’s connection to the mine was highlighted in media reports last year, the company began negotiations with the IUCN to agree to a memorandum of understanding for a study of the species to gauge the impact of the mine on its habitat.

As part of the talks, IUCN ape specialists asked for a halt to any expansion of the gold mine to give them time to chart how many members of the critically endangered species were left in the wild.

But people close to the negotiations, which started more formally in early February, have become increasingly concerned over the integrity of the process after satellite footage showed the mine was continuing to expand while the talks were under way, three people with knowledge of the discussions said.

“One could look at the continued expansion and it suggests they are engaging in bad faith,” Amanda Hurowitz, a senior adviser with environment group Mighty Earth, said. “This is a species on the brink of extinction.”

Ian Redmond, a biologist and conservationist known for his work with great apes, said he was “surprised and disappointed” by the situation.

“While you are negotiating, they are continuing to fight and gain advantage,” he said. “From what I can see, there is significant clearance of what was natural forest.”

Jardine said ensuring the mine does not impact the orangutans is “a priority” for the company and it hoped to agree to an MOU “as soon as possible”.

“At the same time, we have to ensure that we continue to support the local community who depend upon the mine for their livelihoods,” Jardine said.

Sticking points in the negotiations included the length of time needed for the field study and what sort of activities constituted expansion, two people familiar with the matter said. Jardines also had to negotiate internally with its Indonesian subsidiary to convince it of the terms of the MOU, which had complicated matters, they added. 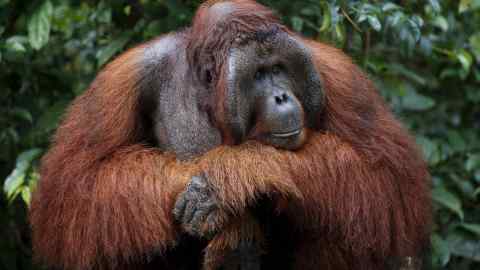 While there was no agreement between the parties to halt mining development at the start of the talks, “it has dragged on,” one of the people said. “You can’t definitively say they killed orangutans, but they cut down areas where there were orangutans, that were within their known range.”

Jardine, whose controlling family has Scottish roots, has previously been criticised over the environmental impact of its investment in Astra, whose subsidiaries are involved in mining and the palm oil industry.

Covering 130,252 hectares, the Martabe open pit mine started production in 2012 and had produced 7.6m ounces of gold and 66m ounces of silver as of June last year.

Astra’s subsidiary bought the mine in 2018, a year after the Tapanuli orangutan was first described as a separate species, becoming the first great ape to be discovered since the 1920s.

The IUCN called for a halt to all projects potentially impacting the Tapanuli orangutan’s habitat, which is confined to about 1,100 sq km of North Sumatran forest.

“The relatively small population size makes the species especially vulnerable to extinction, as any loss of habitat or disturbance could make the population too small to remain viable,” the organisation has said.