Mr Xi recognised that globalisation was not without difficulties. But, he argued, “blaming economic globalisation for the world’s problems is inconsistent with reality”. Instead, “globalisation has powered global growth and facilitated movement of goods and capital, advances in science, technology and civilisation, and interactions among people”. His vision matches that of the last US president to address the World Economic Forum. In 2000, President Bill Clinton argued that “we have got to reaffirm unambiguously that open markets and rules-based trade are the best engine we know of to lift living standards, reduce environmental destruction and build shared prosperity”.

Mr Trump rejects this vision: “We must protect our borders from the ravages of other countries making our products, stealing our companies and destroying our jobs. Protection will lead to great prosperity and strength.” Moreover: “We will follow two simple rules: buy American and hire American.”

This is not chatter. Mr Trump has already cancelled US participation in the Trans-Pacific Partnership negotiated under his predecessor. He has announced his intention to renegotiate the North American Free Trade Agreement. Furthermore, he has made highly punitive threats against Mexico (imposition of a 35 per cent tariff) and China (imposition of a 45 per cent tariff). Behind this is what Peter Navarro, Mr Trump’s trade policy adviser, and Wilbur Ross, his proposed commerce secretary, call the “Trump Trade Doctrine”, the view that “any deal must increase the growth rate [of the economy], decrease the trade deficit and strengthen the US manufacturing base”.

For a British reader, this brings back memories of the “alternative economic strategy” advanced by the leftwing of the Labour party in the 1970s. Just like Mr Navarro, Mr Ross and, apparently, Mr Trump, those leftwingers argued that trade deficits constrain demand. Controls on imports were their solution. Deals aimed at decreasing the US trade deficit seem to be Mr Trump’s. Who would have imagined that primitive mercantilism would seize the policymaking machinery of the world’s most powerful market economy and issuer of the world’s principal reserve currency?

The frightening fact is that the people who seem closest to Mr Trump believe things that are almost entirely false.

They believe, for example, that a value added tax not levied on exports is a subsidy to exports. It is not: US goods sold in the EU pay VAT, just as European goods do; and European goods sold in the US pay sales taxes (where levied), just as US goods do. In both cases, no distortion between domestic and imported goods is created. Tariffs are levied only on imported goods. So they do distort relative prices.

Again, these people believe trade policy determines the trade deficit. To a first approximation, this is not so, because the trade (and current account) balances reflect differences between income and spending. Assume imposition of an across-the-board-tariff. Purchases of foreign exchange will fall and the exchange rate will appreciate, until exports fall and imports rise enough to return the deficit to where it started. Protection then just helps some businesses at the expense of others. The Trump proposals seem to aim at resurrection of the economically dead. True, protection might lower the external deficit by making the US a less attractive destination for foreign investment. But that hardly seems a sane strategy.

Yet another mistake is belief in the merit of bilateral deals. Trade deals are not like deals between companies. They set the terms on which all businesses transact. Bilateralism fragments world markets. It is extremely difficult for firms to create long-term arrangements if new bilateral deals might destabilise competitive conditions at any moment.

Unfortunately, as Martin Sandbu argues, unwise policies might do huge damage. The US president possesses the legal authority to do virtually whatever he wants. But reneging on past deals is sure to make the US seem an unreliable partner. Its victims, particularly China, are also likely to retaliate. According to analysis by the Peterson Institute for International Economics, China and Mexico together account for a quarter of US trade. In a full trade war, US employment might fall by 4.8m private sector jobs. The disruption of supply chains is likely to be especially serious.

Beyond this are huge geopolitical consequences. Beating up Mexico will overturn three decades of reform, probably delivering power there to a leftwing populist. Beating up China may poison an essential relationship for decades. Abandoning TPP may hand a number of the Asian allies of the US over to China. Ignoring World Trade Organisation rules might destroy the institution that provides stability to the real side of the world economy.

The rhetoric of “America First” reads like a declaration of economic warfare. The US is immensely powerful. But it cannot even be confident it will get its own way. Instead, it may merely declare itself to be a rogue state.

Once the hegemon attacks a system it created, only two outcomes seem at all likely — its collapse or recreation of the system around a new hegemon. Mr Xi’s China cannot replace the US: that would take co-operation with Europeans and other Asian powers. The more likely outcome is collapse into a trade policy free-for-all. Mr Xi’s vision is the right one. But, without Mr Trump’s support, it may now be unworkable. That would benefit nobody, including the US.

What most countries need is managed trade and the US is no exception / From Tony Thirlwall, University of Kent, UK

Middle America believes it can survive on its own / From Philip Haberman, Radlett, Herts, UK

US still suffers the distorting effects of VAT in other countries / From Robert Denham, Oakland, CA, US

Explore the series
READ MORE
Too big, too Leninist – China’s next crisis 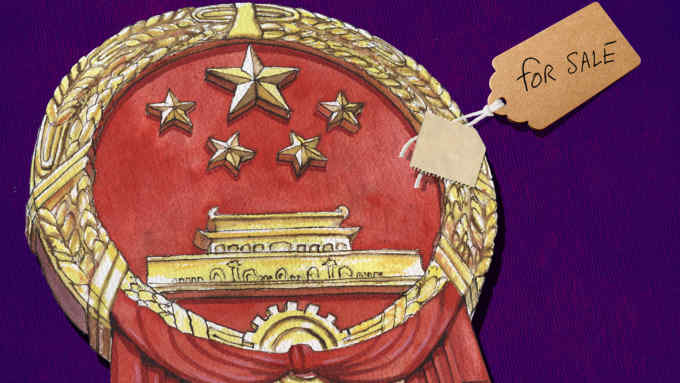