Colombia’s proven oil reserves will run out within the next seven years and its gas reserves within 10. Faced with that bleak prospect, it needs to develop alternative sources of energy quickly and the Caribbean coast is set to play a significant role in this transition.

Until now the country has relied on hydroelectricity and onshore oilfields for its energy needs. Hydro accounts for 70 per cent of Colombia’s energy mix. While that makes the country a relatively clean producer, it also leaves it vulnerable to climatic shocks like the El Niño weather phenomenon.

Meanwhile, Colombia’s conventional onshore oil deposits, dotted around the country from the Magdalena river basin to the Amazonian lowlands and the Ecuadorean border, have been exploited for decades and many are starting to run dry.

So the state is looking to two new sources to power it through the 21st century. The first is non-conventional (ie, non-hydroelectric) renewables and the second is offshore hydrocarbons. In both instances, the Caribbean coast will be at the heart of the revolution.

In the case of renewables, Colombia is just getting started. “When our government came to power a year ago, less than 1 per cent of our energy matrix came from non-conventional renewable sources,” President Iván Duque told the recent UN Climate Change Summit in New York.

“We have tripled that capacity, and our goal is to reach 10 per cent by 2022 and 20 per cent by 2030. By the end of my government in 2022 our commitment is to go from less than 50 megawatts [of non-conventional renewable installed capacity] to more than 1,500 megawatts.”

Of the 115 private sector renewable energy projects the state has approved so far, 76 are on and around the Caribbean coast and are expected to add 5,000MW to Colombia’s energy grid in the years ahead.

Most of those projects are solar but some are wind farms in La Guajira — the arid, sparsely populated and dirt-poor department at Colombia’s northern tip that looks set to become the centre of the country’s renewables industry.

“There’s a unique opportunity in the Caribbean,” says energy minister María Fernanda Suárez. “The average wind speed in La Guajira is twice the global average and we also have high solar radiation. The potential of wind and solar in this region may be greater even than Colombia’s hydro potential.”

Just last week, the government held an auction for its latest batch of non-conventional renewable projects, due to come online from the start of 2022. Of the eight successfully auctioned, six are on the coast — a solar project in Córdoba and five wind projects in La Guajira.

The Colombian state does not subsidise non-conventional renewable energy development but offers incentives to new entrants, who can deduct half the value of their investment from their corporate tax bill.

Foreign companies looking to invest in La Guajira should also know it is home to the Wayúu, one of Colombia’s most numerous indigenous peoples. Businesses setting up in the area are obliged to carry out consultations with them.

Alejandro Mesa, the head of law firm Baker McKenzie’s energy law practice in Colombia, says the process should be seen as an opportunity. “I’m passionate about the development of La Guajira,” he says. “It’s a province that deserves a lot of investment and if it’s done with a social conscience it could really create better conditions for the Wayúu and other people who live there.”

Beyond renewables, Colombia’s other big bet is offshore oil and gas, and here too the potential is huge. The national hydrocarbons agency (ANH) reckons the prospective resource of oil and gas under the Colombian Caribbean seabed is the equivalent of 6bn barrels of oil.

“The Caribbean constitutes a practically unexplored basin with no more than 70 wells drilled so far,” says ANH president Luis Miguel Morelli. “The development of this basin will guarantee the supply of energy in the short, medium and long term.”

The ANH has signed six offshore exploration and production contracts already, with Ecopetrol, ExxonMobil and Shell, which are working in partnership with Petrobras, Repsol and Noble Energy. The contracts should result in a combined investment of $1.83bn.

Before the end of this year, the agency will offer another five Caribbean blocks at auction — three off the coast of La Guajira and two in the Sinú oilfield further west. More than a dozen onshore gas blocks are also up for grabs in the coastal departments of Magdalena, Atlántico, Bolívar, Sucre and Córdoba.

Santa Marta and Barranquilla are competing to become the hub of this fledgling oil and gas industry. The former is planning to open a free-trade zone dedicated to the energy industry, while the latter has established links with Aberdeen in Scotland to learn from its experience with North Sea oil.

On dry land, Glenfarne Group has become the latest US energy company to venture into Colombia, recently buying a natural gas plant in Barranquilla for $420m from local company Celsia.

“It’s no accident that our first investment in Colombia is in Barranquilla,” says Glenfarne’s managing director Bryan Murphy. “We’re very positive on Colombia in general but we think what’s happening on the Atlantic coast is particularly interesting.

“It’s a high-growth area with a very good local government and a very pro-business environment. It’s a great place to be.”

Explore the Special Report
READ MORE
Colombia’s Atlantic coast: a poor relation on the up 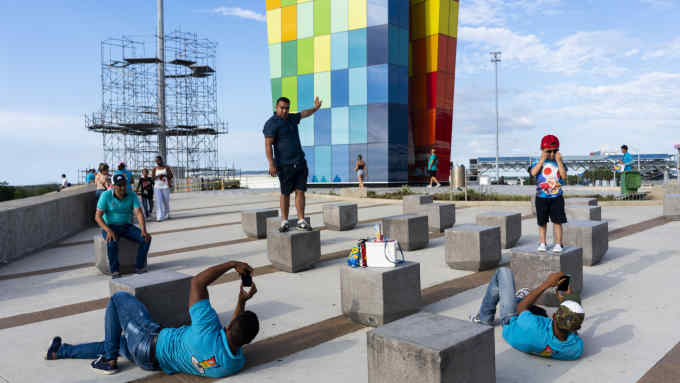