Renée Zellweger is tremendous in Judy. She throws the kitchen sink, if not the whole kitchen, at her portrayal of Judy Garland. It’s good that somebody throws something at something. In a film (directed by Rupert Goold) sentimentalising the ailing performer’s ill-starred cabaret run in 1968 at London’s Talk of the Town — six months before her death — most other actors walk about lifelessly as if auditioning for Madame Tussauds.

Zellweger looks like Garland, sounds like her and even, at best, sings like her. She captures Garland’s personality physical and vocal: that tremolando waif-star with the fright-wide eyes and the pursed scarlet pout. She finds a sassy mezzo voice that can deliver tony torch songs as well as party put-downs. Handed a cake knife at a birthday, she cracks: “Every time I cut a cake I find I’m married to another jerk.”

Zellweger can even handle the overdone plot confections. Screenwriter Tom Edge, adapting Peter Quilter’s stage play End of the Rainbow, requires the heroine first to be booted out of her run — booze, drugs and unpunctuality — and then to assay a one-night comeback crowned by “Over the Rainbow”. That would be held back for the performer’s teary, cathartic swan song, though I can’t believe it turned into the full Vera Lynn singalong depicted here.

Rufus Sewell and Finn Wittrock play Garland’s last two husbands, vying for custody of her heritage. There are also custody fights over the kids. Zellweger gets to negotiate a crying scene in a telephone kiosk, sobbing her long-distance love to the sundered tots in the US. This is filmed in full, tear-stained, Technicolorish close-up like a scene from a bad Lana Turner movie. Somehow Zellweger makes even this bearable. Shouldn’t there be an Oscar for Best Supporting-the-Insupportable Actress? 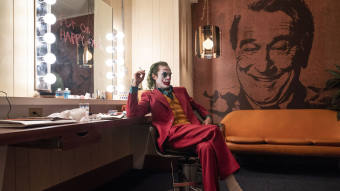