Anjli Raval in London, Simeon Kerr in Dubai and Andrew England in Dhahran

For nearly four years Saudi Arabia has been dangling the promise of offering investors a chance to buy into the world’s most profitable company. On Sunday, it made a significant step towards delivering as officials sought to put aside questions over Saudi Aramco’s valuation to formally announce the kingdom’s intention to list the state oil company.

The launch of the initial public offering process for Saudi Aramco in Dhahran was marked by a hard sell to Saudis who might be keen to have a slice of a national champion as well as foreign investors who are more sceptical about how Riyadh values the state energy company.

Amin Nasser, Saudi Aramco’s chief executive, told reporters that an investment in the company was a unique opportunity. He emphasised the company’s access to some of the world’s most prolific oil reserves, low-cost barrels, as well as Saudi Aramco’s expansion plans into gas and chemicals. The company also lauded its low debt levels.

“It’s a historical moment,” he said. “Our mission is to provide our shareholders with long-term value creation through crude oil price cycles by maintaining our pre-eminence in oil and gas production.”

Although Saudi Aramco did not disclose how much of the company would be sold or how much money the kingdom planned to raise, people familiar with the IPO process have said Saudi Arabia could offer up to 3 per cent on the domestic Tadawul exchange and could raise as much as $60bn.

We want to get financial investors from all over the world

If all goes to plan, the prospectus will be released on November 9 with the listing in December.

Yet questions continue to hang over the company’s valuation and people briefed on the process say the kingdom could still halt listing plans at a later stage.

Crown Prince Mohammed bin Salman, for whom the IPO encapsulates plans to overhaul the country’s economy, has long advocated Saudi Aramco’s worth of at least $2tn. The proceeds are to be ploughed into the Public Investment Fund — the sovereign wealth fund spearheading his economic diversification plans.

While some bankers and analysts have said $1.2tn-$1.5tn might be more realistic, others who secured work on the IPO have higher estimates. But people close to the IPO process have pushed to moderate the young prince’s valuation ambitions closer to $1.75tn in recent days, three people briefed on the matter have said.

Another person said Prince Mohammed has come to terms with the fact the market will determine the valuation, and the success of his wider economic reforms are more important than securing a set target.

The valuation conundrum has been the core reason why the IPO originally planned for 2018 has been repeatedly delayed, and why initial ambitions for a mega-listing at home and abroad have been scaled down to a domestic flotation for now.

A big test for the Riyadh listing, will be the level of foreign investor demand for the company that pumps one in eight barrels in the world but will expose them to the political risk of investing in Saudi Arabia.

“I’m confident there will be ample local retail participation because it’s the crown jewel and there’s a sense of national pride in Saudi Aramco,” said a senior banker. But, the banker added, “it’s important to have global demand for the IPO”.

Foreign institutions have raised concerns about state interference, governance and geopolitical risks that were underlined after drone and missile attacks on Saudi Aramco in September temporarily knocked out half the kingdom’s production.

In a document outlining Saudi Aramco’s formal intention to float, the company showcased its earnings potential. After reporting net income of $111bn in 2018, latest figures showed Saudi Aramco earned $68bn in the first nine months of this year.

The kingdom has changed royalty rates, in an attempt to bolster Saudi Aramco’s valuation. Then on Sunday the oil company disclosed it would only pay a 20 per cent tax rate on its refining and chemicals business next year, down from a 50-80 per cent range. 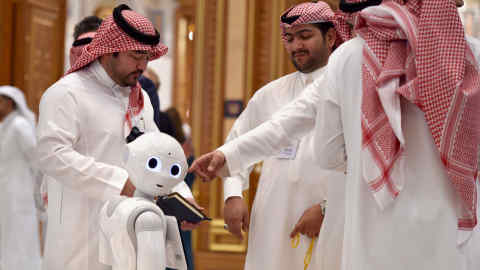 Dividends too were in focus. After disclosing plans in September to pay at least $75bn annually, in an effort to woo investors, Saudi Aramco said on Sunday this could be even higher once any special payouts were factored in. The company has also said it would prioritise non-government shareholders in an unprecedented move.

An offer to boost the $75bn annual dividend to $80bn would, at an $1.8tn valuation, lift the expected yield for investors up to 4.4 per cent, roughly on par with the global average of listed oil companies’ yields, according to Tarek Fadlallah, regional chief executive of Nomura Asset Management.

“That might be enough to get it over the line,” he said.

Saudi Aramco confirmed plans to cut long-term capital expenditure, which were first reported by the Financial Times. Saudi Aramco expects to spend $35bn-$40bn in 2020 and up to $45bn the year after. Had Saudi Aramco continued with its prior ambitions, spending would have hit at least $55bn-$60bn, two people said.

The company also revealed the terms of its acquisition of petrochemicals company Sabic, with 36 per cent of the $69bn consideration to be paid in cash on completion next year and the balance to be paid in promissory notes over six years.

It has sweetened the deal for investors at home as well. Retail investors in the kingdom will be permitted to receive one bonus share for every 10 if they hold the shares continuously for 180 days after the first day of trading.

When asked about the timing of the IPO and what has prompted the urgency for a listing this year, Mr Rumayyan said: “The question could be: Why not now? . . . This is the right time for us.”

Aramco sale does not deserve to be supported / From Judith Barnes, For Support Saudi Women, London, UK