The journalist swears by her Bally boots, Fitbit and the power of education

My personal style signifier is a crisp white shirt with a twist, such as a weird asymmetric collar or a boxy Japanese cut. Then I have my off-duty, in-the-field look – jeans and the same pair of bottle-green leather boots I bought from Bally 10 years ago. They are my good-luck boots, and they’ve gone from an interview with a president to deep into west Mosul when the bombs were falling.

I have a collection of blank paper. I’m constantly writing notes to my son, explaining why I chose to go to Syria when he was six months old, or telling him about the four Trump rallies I attended in a week. I write them on my phone or laptop but my aim is to transfer them to paper, and every time I pass a stationery shop I buy some more beautiful paper and envelopes.

On my wishlist is an onyx and gold Alhambra bracelet from Van Cleef & Arpels. I have the ring and necklace and I think that matchy-matchy element stops me buying the bracelet. I don’t ever want to be predictable. From £2,800

If I could make one lasting change in the world, it would be education for girls. That is why I established the Yalda Hakim Foundation, which provides scholarships and mentoring for young women in Afghanistan. If my parents hadn’t fled Afghanistan when I was six months old, would I have been denied an education? I am who I am because of the education Australia provided. Today, after the fall of Kabul, I believe in that cause more than ever. yaldahakimfoundation.org

The gadget I couldn’t do without is my Fitbit. I walked 42,000 steps in one day during lockdown. I’m incredibly competitive and was being egged on by my friend, the economist Mohamed El-Erian. I decided to beat his personal best by walking across London. I posted it everywhere on social media.

The place I can’t wait to go back to is Sana’a in Yemen. I was there covering a story before the war, and I remember standing on a hotel rooftop at dusk as the call to prayer was ringing out across the city and people were rushing through the narrow alleyways with torches. This incredible but godforsaken city reminded me of Afghanistan – the kindness and hospitality of the people, coupled with the horror they endure. I’m concerned to see what it has become.

And the best souvenir I’ve brought home is an Afghan rug from a store on Chicken Street, the famous shopping street in Kabul where people have been selling antiques, carpets and knick-knacks for generations. I was in town to interview Hamid Karzai and gained exclusive access to the village in Kandahar where US staff sergeant Robert Bales had massacred 16 Afghan civilians. My team and I crossed a minefield to get to the homes of the victims, and the story was broadcast on multiple channels globally. It was after this that the BBC offered me a job and I left Australia and moved to the UK. The rug reminds me of that very special trip, which was a turning point in my career.

The last item of clothing I added to my wardrobe is a beautiful dark-grey semi-backless silk jumpsuit with flared trousers from Australian designer Scanlan Theodore. I grew up in Australia and most of my favourite designers are from there.

The visionary idea I wish I’d come up with is electricity. When you see a society fall into darkness because they are relying on generators, you are reminded of the power electricity has to change lives. Something as simple as light provides safety, security, opportunity and education.

The best book I’ve read in the past year is Julian Jackson’s biography of Charles de Gaulle, A Certain Idea of France. I loved the way this junior general convinced Churchill to have his back, then mobilised the French to stand behind him and take their country back. It taps into the way I feel about Afghanistan.

My style icon is somewhere between Audrey Hepburn, with her clean-cut little black dress and the ability to make everything look effortless, and Bernard-Henri Lévy, with his signature white shirt and blazer.

The charitable organisations I most admire are Reporters Sans Frontières and the Centre for the Protection of Afghan Women Journalists. Around 700 Afghan women were working as journalists out of Kabul before the city fell. Now, fewer than 100 remain in the capital. They are getting support and assistance from these groups, which are also documenting the impact their absence is having on press freedom.

The beauty staple I’m never without is black kohl. It can be any brand: currently that’s YSL, but I’m equally happy with Maybelline or one I’ve picked up in Delhi.

In my fridge you’ll always find good cheese from La Fromagerie in Marylebone. Cheese is my go-to when I don’t want to cook, eaten with fresh fruit and quince paste. Then there’s fresh yoghurt for my son, avocados and cold-press juices we make ourselves. We also pick up some honey wherever we go, most recently one from Daylesford in the Cotswolds and another from Syria, which is blended with pistachios.

An object I would never part with is a lemon citrine ring I bought in Mumbai more than a decade ago. The people in the store blessed the stone, and even though I’m not superstitious I now can’t travel without it. I feel like it is my protector.

I’ve recently rediscovered the fourth volume of Robert Caro’s biography of Lyndon B Johnson. It took him a decade to write, and it’s taken me almost as long to read. Caro is an intellectual hero. This volume gives an insight into how ineffective LBJ felt as vice-president, and then the masterful legislator he became when Kennedy died, and how he was able to push through the Civil Rights Bill using the power of democracy.

The last thing I bought and loved was an artwork called Madonna by the British-Nigerian artist Asìkò. It is a tribute to women like his mother, an immigrant from Nigeria to the UK, and shows a woman with breasts bared, holding her child. It’s a strong, fierce look that captivated me and captured my own journey.

The one artist whose work I would collect if I could is Dalí. He had such an unusual personality and there are so many layers of storytelling in his work. I would cover my flat with it and explore the complexities. I particularly like his 1945 painting My Wife, Nude, Contemplating Her Own Flesh Becoming Stairs, Three Vertebrae of a Column, Sky and Architecture.

A recent “find” is long walks on Hampstead Heath with my two-year-old son. It’s my light relief. It’s so vast that we constantly find a new little passageway or a hidden bench.

The best gift I’ve given recently is a box of cheese from the Hamper Lounge that I sent to some friends in Yorkshire. When Kabul fell, these friends returned the favour and sent me a parcel of cheese and crackers, honey, a hot-water bottle and lots of amazing things. It kept me going.

An indulgence I would never forgo is my monthly facial. The heavy make-up I have to wear for work takes a toll if I don’t look after my skin. My facialist left London during lockdown, so I’m looking for a new one.

My favourite room in my house is my living room, which puts me at ease. I have a really beautiful electric-blue velvet sofa from Roche Bobois. It’s a piece in itself but I can also lounge on it. 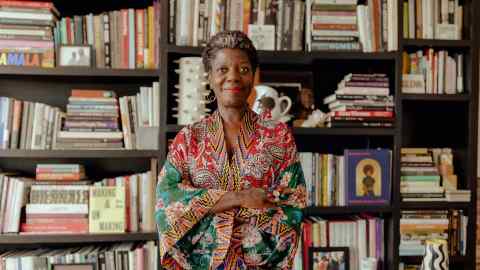 The last music I downloaded was some haunting Ethiopian jazz by Mulatu Astatke. He is the founding father of Ethio-jazz. I first discovered him at a wedding in Eritrea, and it’s the music I’ve gone back to since the fall of Kabul – nostalgic, familiar, comforting.

If I weren’t doing what I do, I would be in politics. I’d like to be an advocate from within the system – I’ve always believed you need to be at the table to get things done. In interviews I am exacting about objectivity, but I respect leaders who believe in a cause greater than themselves and who show courage. John McCain was a good example: he always wanted to meet the dissidents, the ones fighting for a cause, and then advocate on their behalf.