Only way to end ‘vicious circle’ of shortages is for people to buy less, warns head of port operator

One of the world’s largest port and terminal operators has warned the global shipping and supply chain crisis that is leaving shelves empty on the high street can be resolved only by a slowdown in consumer demand.

Morten Engelstoft, chief executive of Maersk-owned APM Terminals, said a “vicious circle” had been created by surging demand putting strain on container groups, suppliers and logistics companies as they struggled to deliver goods.

“We need to work out how we break this vicious circle,” said the boss of APM, the ports and terminal division of the world’s biggest shipping group, in an interview with the Financial Times.

“We need lower [consumer demand] growth to give the supply chain time to catch up, or differently spread out growth. Over a long period of time, we will need to recover efficiency.”

Although admitting ports need more investment to improve infrastructure, he stressed soaring US consumer demand was responsible for strains in the system.

US imported goods in July were up 20 per cent over the previous year and 11.5 per cent over 2019 as consumers splashed out, with their spending supported by stimulus measures since the second half of last year.

A percentage increase in US imports and exports resulted in a far larger bump in volumes than elsewhere, Engelstoft said.

“It’s a percentage of an enormous volume. The sheer size of business going through is so enormous that the amount of port capacity, truckers, warehouses and even labour to man all the equipment has created a bottleneck.”

Congested ports are being hit by a global shortage of truck drivers and constricted space at warehouses, causing further delays in deliveries disrupted by the Covid-19 crisis.

John Dizard
Is the world facing an inventory recession? 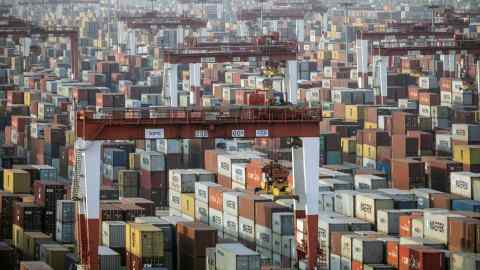 Congestion hit a peak last week at Los Angeles and Long Beach ports in California — the main gateway for Chinese goods into the US where APM has a terminal — since the pandemic started.

More than 40 container ships were anchored outside the ports waiting to berth, beating February’s record.

US and European retailers and wholesalers also worry supplies for the peak shopping season in the run-up to Christmas could be disrupted.

In addition, retailers are adding to pressures by stocking up for Black Friday, the day after US Thanksgiving in November, the traditional start of the Christmas shopping season, with pressure unlikely to ease before 2022.

Alex Hersham, chief executive of Zencargo, a freight booking platform, said there might be a slowdown in demand in February during the Chinese new year, giving the shipping industry a chance to catch up on backlogs.

But even if there is a slowdown, some executives warn the need to restore depleted inventories will make the usual four to six-week lull in cargo volumes around the lunar new year less likely.

Brian Sondey, chief executive of Triton International, the world’s largest container leasing company, said container volumes were “too large to clear out during that window”.

“Consensus in the industry is we’re unlikely to see a cleaning up of the situation until deep into next year,” he added.