Meet the curators of the Venice Biennale of Architecture

“Everybody has a right to benefit from architecture,” says architect Shelley McNamara. It is an attitude that helps, I think, to explain the title that Grafton Architects, led by McNamara and Yvonne Farrell, has given to the next edition of the Venice Biennale of Architecture, of which they are curators: “Freespace”.

Now in their early 60s, the Irish pair studied together in Dublin and established their practice as a co-operative there in 1978. It has grown to a staff of 27 and they have since held professorships at Yale and Harvard, in Switzerland as well as in Ireland. Suddenly, however, they seem ubiquitous. As well as being selected as directors of the Biennale (“that one came out of nowhere”, says Farrell), their remarkable building for the University of Engineering and Technology in Lima, Peru, won the RIBA’s inaugural International Prize last December and they were chosen for the high-profile Paul Marshall Building at the London School of Economics.

Utterly unstarry, chatty and unapologetically poetic about their craft, the two women represent perhaps the most attractive aspects of contemporary architecture: the dedication, the civic-mindedness, the engagement with the landscape and the future of the city, its democracy and its openness.

They say things like: “We are interested in going beyond the visual, emphasising the role of architecture in the choreography of everyday life.” Or “Freespace focuses on architecture’s ability to provide free and additional spatial gifts to those who use it and on its ability to address the unspoken wishes of strangers.”

These are phrases that convey a spirit of generosity and teeter just on the right side of cliché. After our meeting in a London café, I notice that some of these aphorisms, which seem spontaneous, have been carefully crafted for their manifesto for the forthcoming Biennale. But they seem so natural, the result of long years of thinking about architecture, that it doesn’t bother me.

Their argument is a fine one. “We see the earth as client,” Farrell says. “But this brings with it responsibilities. Light, so important in architecture, is free. It doesn’t cost anything. So many of the elements of architecture — the wind, the shade, the moon, the landscape, the clouds — are free, already there. The term ‘freespace’ is about the value of architecture — its totality — about what other aspects architects can bring.”

One of the most interesting things about Grafton’s success has been the type of architecture it makes. Its two most visible and provocative buildings, the School of Economics at Milan’s Bocconi University, with its massive introducing blocks, and the UTEC in Lima (which looks a little like the back of a modernist football stand) are, in my opinion, neo-brutalist.

Brutalism was an architecture of epic spaces and sculptural volumes, heavy on concrete and public space, a movement often associated with the big, benevolent late-modern state and a kind of public vision that has pretty much disappeared from the contemporary city. It went out of fashion by the late 1970s and was often reviled by the public and the press alike. Yet in the era of neoliberal politics and a public realm left almost entirely to the private sector, it has come back into fashion, with an almost fetishistic admiration for its fierce concrete, sharp shadows, strong values and assertiveness.

The two architects wince slightly when I suggest that their work represents a kind of brutalist revival, but they don’t entirely deny it. “Brutalism?” says McNamara. “I think what we’ve gravitated towards is not so much brutalism as the ‘heroic’, the kind of large-scale space which binds people together — the capacity for architecture to make space.”

“It’s more that we’re interested in gravity, in an architecture being legible,” Farrell chips in. But then, slightly contradicting herself, she adds: “Light melts structure.”

The resolution of these contradictions — the struggle between weight and light, architectural expression and public spirit, determination of form and openness to users’ desires — is, I suggest, to be found in Brazil, in the work of João Batista Vilanova Artigas and Lina Bo Bardi. In buildings such as the São Paulo Museum of Art and the SESC Pompeia, Bo Bardi, whom McNamara and Farrell cite often, elevated buildings to create free public space below or reworked industrial courtyards as democratic piazzas. But the use of concrete to create vast planes and spans is arguably geared to a different climate and a different attitude to landscape from those of northern Europe.

“Architecture is the silent language that speaks,” says McNamara. “We want to understand whether we can heighten the awareness of place with architecture.” Certainly their Milan building is strikingly different to their Lima building, which takes advantage of the city’s congenial climate. So is there a big idea?

“We don’t have a thesis,” says Farrell. “We’re evolving with every project and treat each one as an opportunity to test new ideas. You don’t know what you’re going to get . . . An architect’s career isn’t linear, it’s made up of moments.”

McNamara quotes the Spanish architect Alejandro de la Sota: “He said that an architect should make as much nothing as possible.” It sounds counterintuitive, but nothing is the hardest thing to build. Architecture is usually thought of as buildings, but most people experience it through the streets, plazas, alleys or the landscapes it defines. It is, or should be, very much about the making of public space.

“What we do is not about the product or about making our work fit into a thesis, but it is an attitude to place,” says McNamara. “We try to listen, to see what will emerge.” In Venice they will have access to architecture’s most visible and intellectually charged space. It will be fascinating to see how much nothing they manage to make that silent language speak. 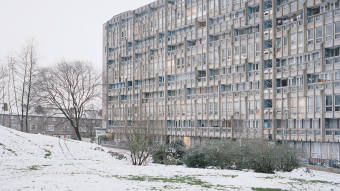