Boris Johnson’s government is to launch a major public information campaign to reassure Britons about a potential no-deal Brexit, as the prime minister said he was “confident” the EU would change its position on the Irish border backstop.

Downing Street declined to comment on the leaked document about Operation Yellowhammer, its planning for a no-deal Brexit. But officials said the document was “out of date” and did not reflect the government’s state of preparedness.

Whitehall insiders said the media campaign, with a budget of £100m, would begin in the next couple of weeks to explain in a “user-friendly way” what individuals needed to do ahead of Brexit day on October 31. In an effort to rebut the stark warnings in a leaked contingency planning paper, the emphasis will be on consumers.

Those with knowledge of the preparations said the campaign would be run on TV, radio and social media. The government is working to ensure that GOV.UK, its official website, is ready for a significant increase in traffic once the campaign launches. It will include details of what consumers need to do to be prepared for travel abroad.

A Number 10 spokesperson said “further information will be published in the coming weeks” on government preparations for leaving the EU with or without a deal, noting that Mr Johnson had “significantly stepped up planning” for no-deal. Downing Street insisted it had been “engaging widely” with businesses, despite lobby groups expressing concern that smaller firms were underprepared.

Video: Brexit: Boris Johnson is one step closer to no-deal

Mr Johnson insists he still wants to strike a deal with Brussels. But during a visit to a hospital in Cornwall, Mr Johnson said it was “very much up to our friends” to change their stance on the withdrawal agreement, admitting that other European nations were “showing a little bit of reluctance”.

“They have seen that the UK parliament has three times rejected the withdrawal agreement, the [Irish] backstop just doesn’t work, it’s not democratic and I hope that they will see fit to compromise but in the meantime we get ready to come out on October 31,” he told Sky News.

“That’s fine, I’m confident that they will. But in the meantime we have to get ready for a no-deal outcome. I want a deal. We’re ready to work with our friends and partners to get a deal. But if you want a good deal for the UK, you must simultaneously get ready to come out without one.”

FT SeriesUK economy: the state of play ahead of Brexit
On the brink: UK economy braces for Brexit ‘shock’ 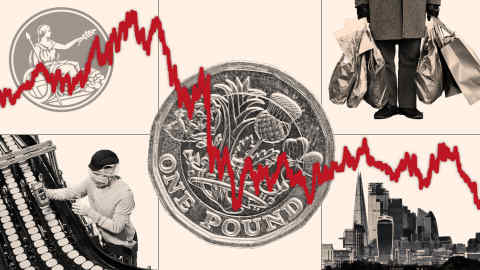 Responding to the leaked Yellowhammer document, Mr Johnson added that he was “very confident” that the government would be ready for departure on October 31, with or without a deal.

“I’m not pretending that there won’t be bumps on the road. There will be, I said that on the steps of Downing Street, but if everybody puts their minds to it I have absolutely no doubt that we can get ready.”

The Yellowhammer document said the consequences of a no-deal exit could be widespread disruption — possibly for months — to trade, food and medicine distribution, fishing, and fuel supplies, and civil unrest.

Parliament will have a chance to scrutinise no-deal planning in early September. Michael Gove, the minister in charge of no-deal preparations, will update MPs on the government’s preparatory work for Brexit when it returns on September 3, according to officials.

This will be the first of what will become weekly updates to the House of Commons on preparations for leaving the EU and Mr Gove is expected to cover the activities of the daily and weekly committees working on deal preparations.

Downing Street has rejected a call from 110 MPs to recall parliament early from its summer recess to allow further scrutiny of its Brexit plans.

“The House of Commons agreed the date it would rise for summer recess, as well as its return on September 3 and this was passed by a majority of close to 200 MPs,” a spokesperson said.

Only the government has the power to recall parliament early.

In a keynote speech in Corby, Jeremy Corbyn, Labour party leader, said he would table a vote of no confidence in the Johnson government when parliament returns next month.

However, Mr Corbyn did not spell out whether this would be tabled immediately after parliament returns on September 3 or at some later date.

“I will bring a vote of no confidence in the government, and if we’re successful, I would seek to form a time-limited caretaker administration to avert no deal, and call an immediate general election so the people can decide our country’s future,” he said.

Mr Corbyn ruled out suggestions by some MPs that a caretaker government could only be formed by a figure commanding wider support across the Commons.

Video: Brexit: Remainers are failing to get their act together