Divisions on taxes do not threaten triple A status, according to Moody’s and Fitch

Mehreen Khan in Brussels and Tommy Stubbington in London

The EU’s plan to issue €750bn of bonds to fund its Covid-19 recovery poses no immediate threat to the bloc’s credit rating, according to the biggest agencies, despite big divisions between member states on how to pay the money back.

The EU’s 27 governments agreed in July a landmark response to the coronavirus crisis by empowering the European Commission to raise €750bn of debt and to hand the proceeds to stricken economies in the form of loans and grants. The deal included a promise to explore new sources of income — such as a European digital tax or levy on carbon imports — to pay back the EU’s biggest ever exercise in joint borrowing. But governments are divided over the levies.

Rating agencies say these taxes will not be crucial in determining how creditworthy the EU’s bonds are.

“Our credit rating focuses on the ability and willingness of the issuer to service the debt,” said Dietmar Hornung, associate managing director of Moody’s, which considers the EU a triple A borrower, the highest rung available. Mr Hornung noted that EU governments have agreed to provide a potential extra €80bn a year in budgetary headroom to pay back the bonds. “In this context, the origin of the proceeds is of secondary importance,” he said.

Fitch Ratings also said Brussels’ triple A status did not rely on the EU’s capacity to establish these so-called own resources. Despite the massive expansion in borrowing planned under the recovery fund, the cost of servicing the debt is comfortably covered by the potential extra contributions from top-rated member states such as Germany and the Netherlands, according to Arnaud Louis, head of supranational ratings at Fitch.

France is among the countries leading the charge for EU taxes on global digital companies and a carbon border levy on foreign polluting imports — measures it says will mean European taxpayers will not have to bear the direct cost of the recovery effort.

The commission has said it will come up with proposals for both levies in the first half of 2021 with a view to having an agreement in place by 2023. However, tax issues require unanimous support from member states. Germany has also spoken out against the carbon border levy, while the EU digital tax proposal foundered when it was first proposed two years ago.

Europe’s alliance of rich “frugal” countries — made up of Austria, the Netherlands, Sweden and Denmark — are likely to push, instead, for smaller common EU budgets, using the savings to help repay the debt.

Fitch said it would keep close eye on any resistance in these countries to the prospect of bigger payments to Brussels. “Higher budget contributions could exacerbate divergences between net contributors and net beneficiaries,” said Mr Louis. “Political developments that lead to a weakening in cohesion among member states or a reassessment of their propensity to support the EU could lead to negative rating pressure.”

As it stands, only an EU plastics recycling tax, estimated to generate a modest €7bn a year, will be in place from 2021 to meet some of the debt costs. The repayments of principal on the recovery bonds start in 2028 and range over a 30-year period. Brussels has capped the annual spend on these repayments at no more than 7.5 per cent of the outstanding grants — amounting to just under €30bn a year. 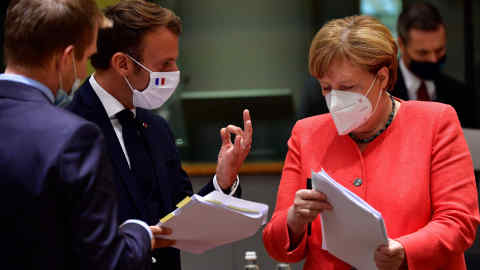 Patrice Cochelin, senior director of sovereign ratings at S&P, which rates the EU at a lower double A, said future clashes over EU taxes could still “weaken the argument in favour of more political cohesion in the bloc”.

The recovery fund will need to be ratified by member states’ national parliaments, a process that EU diplomats warn could stretch into early 2021. A separate agreement on the EU’s next budget will also need to be agreed by the European Parliament, which is pushing for a strong commitment to develop the bloc’s taxation powers.

The EU’s debt currently trades in the market closer to that of double A-rated members of the bloc, despite its top rating from two of the big three agencies. An EU bond maturing in 2032, for example, trades at a yield of minus 0.11 per cent, close to that of a similar French bond and putting its borrowing costs more than 0.3 percentage points above the German equivalent.

Yields might have to rise a little further to lure buyers for the upcoming deluge of bonds, said David Zahn, head of European fixed income at Franklin Templeton.

But Brussels should have little trouble selling the new debt, with or without the prestige of a top rating, he added. “I don’t think triple A is the be-all-and-end-all. It’s really the backing of the collective taxation of the countries underneath that gives you confidence.”