We use cookies (opens in new window) for a number of reasons, such as keeping FT Sites reliable and secure, personalising content and ads, providing social media features and to analyse how our Sites are used.
Manage cookies
Accept & continue
Special Report Women in business

Six years ago, I wrote about mentoring as a new tool to help women advance their careers. Today, some argue, women receive too much mentoring and not enough sponsorship — where senior colleagues put their reputation on the line to promote their protégés’ careers.

I returned to my original interviewees to find out what they thought. When I interviewed her in 2010, Andrea Blance had just been appointed chief risk officer for Legal and General, the British life assurer. She was being mentored by Sir Mike Rake, chairman of BT, the telecoms group. They met through a cross-company scheme in which FTSE 100 chiefs mentor women nominated by leaders of other blue-chip companies.

I spotted the main change as soon as Ms Blance, now a non-exec board director at two companies, walked into the offices of the FT in early September: she was far more self-confident and relaxed.

“When I first met her, she was mouse-like, your typical accountant, very involved in the details,” recalls Sir Mike, himself a former chair of KPMG, the professional services firm. “I needed to build her self-confidence,” he says, including in areas of the male-dominated finance sector “where she lacked confidence but had the knowledge”.

Both mentor and mentee, who remain in touch, agree that the lines between mentorship and sponsorship are often blurred: the exact mix depends on what is needed when. “[Sir Mike] gave me some brutal advice early on,” recalls Ms Blance. “There was nobody internally I could have had this kind of conversation with.”

Although Sir Mike has been “very happy for me to use his name and has given me some nice informal references . . . he does not know me well enough to be [a proactive] sponsor”.

He helped her overcome her distaste for networking, which was critical to developing sponsors outside her company. “I am a reformed networker,” says Ms Blance. His initial advice was that if she wanted to become a chief financial officer at a FTSE 100 company, she had to leave L&G — which she eventually did, five years later, by which time she was more interested in a portfolio of non-executive directorships. “I think I helped her work out what she wanted to do,” says Sir Mike. “I saw her visibly grow in self-confidence in many different ways. It was quite a transformation.”

The two were matched by Peninah Thomson, an executive coach who set up the cross-company scheme. “Mentorship and sponsorship can shade into each other,” affirms Ms Thomson, who has since set up the London-based Mentoring Foundation. She maintains that government must also keep up pressure on business to do more, without which “there is a real risk of a number of eyes going off the ball”.

The next step, according to Sir Mike, is for employers to provide flexible working to help staff combine careers with raising children. Declaring the argument for diverse leadership “has been won”, he says practical steps are needed because “you cannot achieve diversity through political correctness.”

Tips from a ‘reformed networker’

Do not assume that somebody you think will be a sponsor, will be, and vice versa: You may be sponsored by someone when you least expect it. 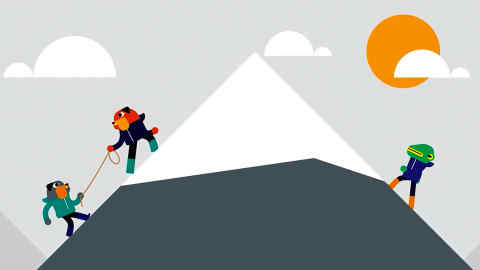 When they started talking in 2009, Sir Mike Rake remembers Andrea Blance as “deeply hurt” that after seven years as financial controller she was not appointed chief financial officer. That role went to Nigel Wilson, who subsequently became chief executive and ended up sponsoring her for two internal promotions and then for non-executive board positions when she decided to leave L&G.

Always look at a job offer rather than turn it down outright, because you will usually learn something useful: When one of her mentees rejected a chance to compete for the position of finance director at a university, Ms Blance advised her to reverse her decision.

The woman enjoyed a big boost to her confidence after she made it to the final two interviewees.

Think forward five years and work out what your transferable skills are: Six years on, Ms Blance is pursuing a portfolio career now consisting of two non-executive directorships — at Scottish Widows, the insurer, and Williams & Glyn, whose planned carve-out from RBS as a standalone retail and small business bank was interrupted at the end of August.

The 52-year-old also mentors for Next Generation FTSE 100, a cross-company UK scheme set up by Peninah Thomson, chief executive of the Mentoring Foundation, targeting younger women identified as future leaders by their companies.