Do not rule out a market panic next month

Everybody seems to be having a hard time finding the most tradeable forms of dollar cash. In the financial markets this has led to a shortage of T-bills, the form of issuance that can be most readily used as collateral for other trades. As Zoltan Pozsar of Credit Suisse says: “The long, three-year period of front-end collateral glut, which lasted from 2018 [to the beginning of February] is over.”

At the other end of dollar asset respectability, the Fed has ordered a record amount of $100 bills to be printed. At the high end of its estimates, that will be nearly $320bn of $100s — enough for every man, woman and child in the US to have another thousand dollars in ready cash. Of course the C-notes are not going to American civilians — at least 80 per cent are shipped from the bureau of printing to non-US banks.

The dollar is mocked by the well informed, but aggressively hoarded by the fearful, and those who do business in the shadows.

Financial panics, especially the ones that do not trigger broad economic recessions, can be useful for some. Coming out of ‘nowhere’, they force markets and politicians to pay attention to excesses that have been excused and problems that have been ignored. Random financial speculation and party politics are at least momentarily set aside so that some unpopular, complicated or unfamiliar changes can be agreed.

The last two weeks of this coming March look like a set-up for some sort of panic in the US Treasury and mortgage-backed securities markets. Not the end of the world, but something like being a passenger in an aircraft that suddenly drops several thousand metres.

The most salient and immediate signal to me has been the plunge in short-term Treasury bill rates since the beginning of the year. In the first six weeks of 2021, one-month T-bill rates have fallen by more than 66 per cent. The yield of two-year Treasuries declined by more than 21 per cent. Those are more dramatic moves than you see in any other broadly traded securities. 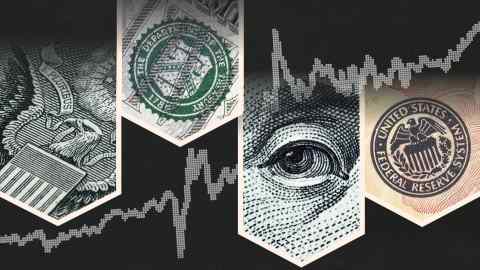 Unlike the Fed’s favourite instrument, bank ‘excess reserves’ on deposit with the central bank, T-bills are ‘collateral’. They can be readily lent and relent to secure other, unrelated transactions. When people or institutions in the global financial system are not feeling eager to trust each other, they demand more collateral.

The degree of that distrust appears to be rising, quickly. You can see that by looking not only at the outcome of official T-bill auctions, but at the range of bids in the auctions. Low bids mean that dealers are willing to accept very low rates, as little as 1 basis point recently, just to make sure they get some of that collateral. That historically happens at systemic stress points.

Simultaneously, the supply of T-bills is shrinking. Because the Treasury wants to rebalance its issuance, it is redeeming bills and selling more long-dated bonds.

That explains part of this year’s unexpected rise in 10-year and 30-year bond yields, which in the past week sailed past the 1.25 per cent level. This in turn triggered a wave of hedging activity by leveraged mortgage banks. As interest rates rise, fewer of the mortgages they own are refinanced at lower rates, and so the “duration” of their assets increases.

To offset this ‘convexity’ risk, they have to sell the equivalent of tens, or even hundreds, of billions in Treasury bond derivatives. This is reinforcing the sell-off in Treasuries and threatening a ‘convexity spiral’ of the sort not seen since 2003. Oh, and the increased derivatives activity needs to be collateralised by T-bills, which you will recall are already in short supply.

If my guess is right, then we have the makings of another ‘event’ like we saw a year ago. Market freezes have a way of happening in March and September, an echo of the crop cycle. That might make it momentarily easier to get past the politics of raising the ‘debt ceiling’. And the big banks might get one more year’s waiver on shrinking their asset base.