George Osborne gambled his future as UK chancellor with a warning that a vote to leave the EU would force him to raise taxes or cut spending by £30bn, in a sign of the deepening anxiety among Remain campaigners that they will lose next week’s referendum.

Mr Osborne’s move drew an angry response from 65 Conservative MPs who said they would block any emergency “Brexit budget” and accused the chancellor of attempting to “talk down the market and the country”. Others said he was in a state of panic.

The MPs claimed the chancellor’s position would be untenable if he were to proceed with the plan in the event of a Leave vote, although some said he was “finished” whatever the result.

Mr Osborne’s warning that he would have to fill in a £30bn “black hole” in the public finances in the event of a Brexit vote — warning that this could involve raising taxes or cutting spending to the NHS — was certainly eye-catching. But it also raised some big problems. Firstly, if Britain votes to leave the EU, it is not certain Mr Osborne will keep his job. Secondly, both Conservative MPs and Jeremy Corbyn, the Labour leader, have said they will not support such an austerity budget.

The chancellor’s supporters shrugged their shoulders and said Mr Osborne did the right thing, because the Remain camp needs to focus public attention on the economic risks to the UK in the final days before the June 23 vote. “This is what Lynton Crosby calls a dead cat,” said one Osborne loyalist, referring to the Australian election strategist’s tactic of making dramatic statements to capture the attention in a campaign.

“For some people, they are only just tuning into the referendum for the first time. It is strategically right to get immigration off the table and turn [the debate] back to the economy.”

Some Conservative MPs believe that Mr Osborne will go down with David Cameron if the UK votes to leave the EU, meaning his political survival may depend on extravagant gestures to jolt the polls back in the direction of the Remain campaign.

The mood in the Remain camp is said to be apprehensive, with recent opinion confirming anecdotal reports that support for a British exit is growing. 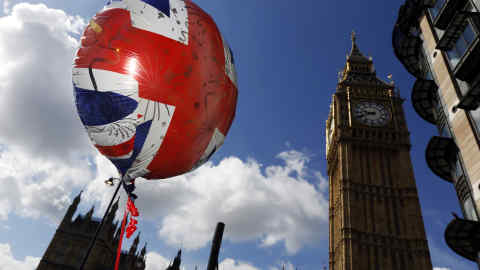 Pro-Remain Conservative MPs were briefed on Wednesday that their party has a good “ground war” in operation, with a special focus on 90 commuter seats in the south-east of England that are said to be fertile ground for their arguments. This will be accompanied by an “air war” that will attempt to keep the focus on the economy — starting with the Mansion House speeches by Mr Osborne and Bank of England governor Mark Carney on Thursday night.

Remain officials say there are no plans for Mr Cameron to demand new EU rules to limit free movement before polling day, not least because it would focus attention back on immigration, the subject he wants to talk about least. Nor are there plans at present for a repeat of a cross-party “vow” of the kind that saw pro-union politicians make a last-minute promise of more power to Scotland if it voted to stay in the union in 2014.

But if Mr Osborne’s tactics help to deliver victory on June 23, it may come at a significant political price for the chancellor. Some MPs within his own party now say his chances of succeeding Mr Cameron as prime minister are over.

Jacob Rees-Mogg, one Eurosceptic Tory MP, said it would be hard for him to restore his credibility “pretty much regardless of the result”, adding that it was “rather sad” to see the chancellor demean his office. One “moderately sceptical” Conservative backbencher called Mr Osborne’s emergency budget proposal “disastrous” and predicted it would trigger calls for his resignation even if the Remain campaign wins next week.

What was the prime minister thinking in allowing him to do this? The chancellor is finished — this is using the machinery of government, for God’s sake. People are incredulous, they can’t believe he has done it

“What was the prime minister thinking in allowing him to do this?” he said. “The chancellor is finished — this is using the machinery of government, for God’s sake. People are incredulous, they can’t believe he has done it.”

The list of 65 MPs critical of Mr Osborne included 20 who arrived in parliament in 2010, with another 12 of the most recent 2015 intake backing them up. Thirteen entered the Commons in the 1990s, when the Conservative party was also fighting bitter internal battles over Europe.

Mr Osborne was already struggling to enact Budget legislation, such as cuts to tax credits and disability benefits, before the EU referendum campaign started; the acrimony caused by his role in the contest could make it even harder for him to win backing for controversial measures among his own MPs.

If Britain votes to leave the EU and Mr Cameron quits as prime minister, even Mr Osborne’s allies admit it would be unlikely he could carry on as chancellor.

On Wednesday a leading Conservative campaigner for Leave said his side was “quietly confident” of victory, adding: “The only question is how big the [winning] margin will be.”

Get alerts on George Osborne when a new story is published