Constructed between 1910 and 1916, at a cost of 3.1mn Deutschmarks (a fortune at the time), Berlin’s iconic Telegraph Office was long one of the Oranienburger Straße’s great beauties; at the height of its use during world war two, it would often operate around the clock and could deliver up to eight million dispatches annually. It fell out of use and into neglect just before the Wall came down. Last November it was reborn as a hotel, courtesy of restaurant impresario Roland Mary (who owns Borchardt, Berlin’s answer to The Wolseley). Telegraphenamt, which soft-opened late last year, has 97 rooms running the gamut from Cosy (which they are, but still big enough to host a king-sized bed and work area) to a top-floor, 140sq m Residence with living and dining areas and a huge en-suite bedroom.

The original brick walls and towering windows still feature, but elsewhere it’s all style and polish, from the curvy headboards and sculptural lighting to the polished-travertine bathrooms. The restaurant, Root, has a menu that spans the globe and a kitchen that sources locally; there will also be a Japanese bakery at ground level serving sushi come lunchtime. You’re 15 minutes from Museum Island, not much further from the Hackescher Markt, and generally adjacent to all the best of Mitte. telegraphenamt.com, from €220

Over-water heritage in the Tasmanian wilds

Pumphouse Point in Tasmania made news when it opened in 2015 for the sheer singularity of its situation: a hydroelectric station in the middle of Lake St Clair, which is more or less in the empty middle of Tasmania itself. The hotel is in two buildings, actually: the Pumphouse (over the water) and the Shorehouse (which is lakeside); both date to 1939, and the hotel’s 18 rooms are divided between them. The re-do is all understated Oz: rough plank, dark matte metal, a monochrome palette, utilitarian kitchenettes in all rooms, and simple furniture with a midcentury bent throughout.

There’s also a private retreat – a new-build accommodation at the lake’s edge. The hotel bills itself as a wilderness retreat: there’s no WiFi, and a minimum two-night stay (three at weekends); and Tassie’s famous Overland Track terminates almost at Pumphouse Point’s doorstep. We’ll buy it, the rigorous, un-wilderness-y style of the hotel itself notwithstanding: the scenery is staggering, and for guests to explore. pumphousepoint.com.au, from AU$560 (about £320)

La Purificadora: the name tells the story of Puebla’s most architecturally striking (and one of its coolest) hotels. In the mid-2000s, Carlos Couturier and Moisés Micha, the dream team behind Mexico’s Grupo Habita collection, found the late-19th-century water-purification plant in the centre of town in a state of total disuse. They brought in the late, great architect Ricardo Legorreta and his son Victor to sensitively create a 26-room hotel on its footprint. Legorreta took the sensitivity part of the remit to heart, incorporating old stones, planks, and even fragments of glass found by an on-site archaeologist into the construction and design.

The resulting structure is a masterpiece: a striking black volcanic-stone outdoor staircase connects the ground level to the rooftop, where a bar and a restaurant await; in the lobby area, the original walls, their paint half-peeled away, stand beside slick cases holding artefacts and books. The rooms largely eschew Legorreta’s Technicolor-riot signature, leaning instead to stone walls, white cotton-layered beds, sturdy wood tables and gleaming plank floors – simple and chic. lapurificadora.com, from $260

A (former) distillery-with-rooms in Philadelphia

We love a really small hotel. If it’s in an up-and-coming neighbourhood, even better. And if it used to be a whiskey distillery: book us in now. Wm Mulherin’s Sons was still making the sauce in Philadelphia’s Fishtown at the turn of the 20th century – a part of town which subsequently took a long turn towards the down-and-out, before being rediscovered and colonised by hipsters and creatives over the past 15 years or so.

Today it’s an achingly cool Italian eatery (which goes by the same obscure name) with just four rooms upstairs. But what good rooms they are: huge, with original strip wood or cement floors, brick walls, sash windows; custom-made furniture by Tim Lewis Studio (down to the walnut sideboards, some of which hold turntables); cool kitchenettes with satisfying deep-brown tile backsplashes. It’s studied workaday American style at its finest, and possibly worth a weekend in Philly on its own merit. wmmulherinssons.com, from $295

That heritage informs The Steam Hotel, whose whopping 263 rooms now fill the 18 storeys of one of the city’s former power plants; old boilers and equipment have been kept as design elements and in some cases even repurposed for use. Water, in all its forms, informs The Steam Hotel’s agenda too: the seventh floor is entirely given over to a large spa and indoor-outdoor pools – but with a champagne bar and orangery alongside, so you can pair your clean-out or soak with a bit of indulgence.

In general, The Steam Hotel seems to privilege partying in its holistic offering: three further restaurants (Chamberlain Grill a sort of international gourmet, Locavore is pan-Asian, Di Sopra is Italian), foosball and billiard tables, a cinema and a rooftop bar round out the picture. steamhotel.se, from about £120 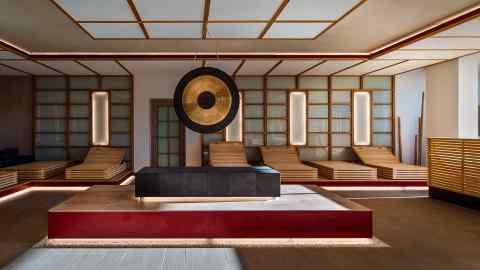