Spirited away: on the mezcal trail in Mexico

When the band stopped playing, I wandered into the agave fields. The tips of the rosette-shaped agave plant are spiky, almost knifelike. I was under clear instructions: snap an end off a spiny plant. Use it as a writing implement. Whatever you write should be a wish, or something you really desire, or want to protect. Think carefully about your wish.

I carved it into the long paddle-like leaf of another agave. When the succulent reached eight to 10 years of age, it would be harvested to make mezcal, and my good wishes and energy would become part of the spirit and bottled. When I left this dusty hilltop of the Oaxacan Sierra, my carving would remain. Afterwards, any time I brought a glass of mezcal to my lips, I would be reminded of my wish, I would wonder where it was now, I would remember the sunset behind the mountains. These were my instructions, and I was happy to obey.

The common misconception about mezcal is that it is a smoky type of tequila. In fact, the opposite is actually true — tequila is a type of mezcal; mezcal is a general term for spirits distilled from agave plants. “People automatically relate mezcal to tequila, because the prime matter is the same,” says Fausto Zapata, co-founder of Mezcal El Silencio, an artisanal mezcal producer. “Both come from the agave plant but think of it like this: two felines may have the same roots but they can be very different animals.”

Mezcal is produced in other areas of Mexico, but Oaxaca, a state in the south of the country, is both its historic home and the core of mezcal production today. Enjoyed since colonial times within Mexico, the popularity of mezcal has exploded beyond its borders in recent years, as anyone who has crossed the threshold of a serious cocktail bar lately could tell you. Bars such as Leyenda in Brooklyn and Mezcalería Tobalá at Whisler’s in Austin, Texas, specialise in the spirit, offering tasting flights and allowing the comparison of single-varietal mezcals from espadin to tobalá to tobasiche.

These tasting flights demonstrate that there is much more to mezcal than just smoke. “Yes, mezcal is smoky in a way,” says Jillian Vose, bar manager at The Dead Rabbit Grocery and Grog in New York, “but there are so many other nuances: the grassiness, the fruit. Start sipping it neat and you’ll get beyond the smoke, fast.” Cocktails are a common introduction to the spirit, but it is also satisfying drunk neat and slow, allowing contemplation of its complexity.

This surge in popularity behind the bar has driven the rise of mezcal tourism in Oaxaca, with steady openings of more mezcal-centric bars and restaurants, more palenques (distilleries) opening their doors to visitors, and more English-speaking guides who can lead the way to tastings at artisan producers in remote villages. Cocktails were my introduction to mezcal, and it only took a handful of mezcal negronis and mezcal old-fashioneds before I booked a ticket to Oaxaca. I wanted to see how mezcal is made, to smell the smoke, to taste this spirit hot off the still.

About 230 miles south of Mexico City, Oaxaca — the capital of the state of the same name — is a colourful town of about 260,000 people with a beautiful colonial core. Its shady streets and vibrant markets have their charms, but for drinkers the city serves one main purpose: a gateway to all things mezcal. There are the many mezcalerias, or mezcal bars, within the city limits, and beyond, the rural palenques where agave plants are chopped by hand and roasted.

On my first night in Oaxaca, the mezcal flows like a summer deluge. In a dimly lit mezcaleria near my hotel, glasses are filled with abandon to the point of overflowing. Novices and aficionados alike sample sips from bottles that sometimes will never make it beyond the border. 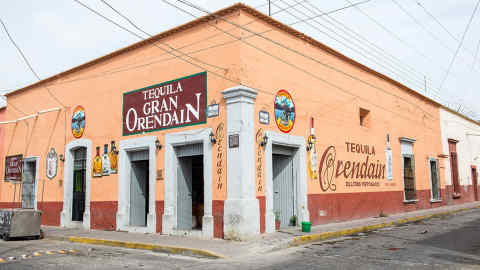 “It’s a different type of sensation when drinking mezcal,” says Jason Cox, co-owner at El Destilado, one of Oaxaca’s mezcalerias. “People open up and share and laugh — it’s such a clean, clear, lucid, buzz.” El Destilado, which opened in September 2015, is a destination for mezcal drinkers looking to get geeky about their favourite spirit. Among approximately 50 options, visitors can sample mezcals fermented in wood, clay pots, or even raw hide.

The following morning, I wake with a surprisingly clear head — mezcal is famed for its ability to leave the imbiber headache-free — and set out into the countryside. My hotel has arranged a driver, since mezcal tasting and self-driving don’t mix. Our destination is the Mezcal El Silencio palenque, where the spirit has been made for generations, close to the village of San Baltazar Guelavila, 90-minutes from the city. As I step from the car, I’m smacked with the smell of sweet roast potatoes, but there is no food being prepared. That powerful aroma is roasted agave, being ground into a mash by a stone wheel pulled in a circle by a donkey. Master mezcalier Pedro Hernández is in charge, and I arrive just in time to witness a roast from the start.

The name mezcal comes from the Nahuatl language and means “oven-cooked agave”. Mezcal gets its signature smoky character from the roasting of agave hearts, or piñas, in large pits lined with hot stones (tequila, by contrast, is commonly made by cooking agave hearts in large, steam-heated ovens). At the edge of the pit, I can see heat rising off the stones, distorting the air into hazy waves. Before the roast, agave plants are harvested and their spiny leaves hacked off to reveal the core that can weigh up to 100kg. After these piñas are chopped by hand, they’re ready to be tossed into the stone-lined pit. But first, a tradition. “One sip of mezcal first thing in the morning,” Hernández says with light in his eye. “We call it the silent moment — every mezcalero does it.”

About 200 pieces in total are tossed into the pit, with each worker throwing at least one piña (everyone must participate or it is believed that the batch won’t cook evenly). The pile of raw agave hearts is covered with agave fibre and many shovelfuls of earth, then will be slow-roasted for about four days. Once uncovered, the sticky agave is ground with a stone wheel pulled by a donkey into a pulp that will ferment and then be distilled. The whole process from harvest to bottle takes about 25 days.

“To fully experience mezcal, you must go to Mexico,” says Braden Lagrone, a mezcal expert and a bartender at Cure in New Orleans. “You need to handle agave, to see it roasted, to get your hands a little dirty.” The palenques surrounding Oaxaca are not the air-conditioned distilleries that many drinkers might be accustomed to, but, in exchange for the heat and occasional whiffs of mule manure, there are many rewards. Lagrone is a particular fan of tasting mezcal hot off the still, with the smell of roasted agave in the air. “Off the still, it’s so aromatic and pungent and concentrated,” he says. “When something rests in glass it mellows out — I prefer the young, the hot, the rustic. It’s exciting to have the opportunity to taste that before it begins to change.”

After my hands-on education at the palenque, we climb dusty roads to reach a hilltop for a picnic of mole, rice and beans alongside little icy bottles of Mexican beer and, of course, more mezcal. A trumpet signals a band into action, and on a makeshift dance floor I’m taught a few steps.

When the band stops playing, I wander into the agave fields with a glass of mezcal in hand. I sketch my wish into the spear of an agave plant and keep walking, succulents spotting the hillsides as far as the eye can see.

Mezcal El Silencio is open to visitors by appointment (free but visitors must arrange their own transport). Other palenques open to visitors include Mezcal Real Minero; Mezcal Educational Tours offers single and multi-day guided trips and tastings. In Oaxaca, specialist bars to visit include Mezcaloteca, El Destilado (eldestilado.com), In Situ and Mezcalogia (no website, Calle Garcia Vigil 509)