The Greek party island unveils its latest starry occupant, plus a Loire wine spa and star-gazing in Patagonia

Setting up in the Cyclades

It makes perfect sense: Soho House on Mykonos. Nick Jones’s now multi-national members’ club-hotel portfolio knows how to do seaside (see the Little Beach Houses in Malibu and Spain). Last summer it acquired the Cycladic revelry capital’s coolest beach club, Scorpios, described by its founders as “a modern interpretation of the ancient Greek agora: an inclusive gathering place designed to galvanise the artistic, spiritual and social life of its community”. Sure, all of that – just with lots of rosé and DJs. Jones & Co has also taken possession of the hotel next door, the San Giorgio, which has had a soup-to-nuts overhaul in quintessential House style to emerge as Soho Roc House. Its 45 rooms range from Tiny to Extra Large, as per; there are the requisite Roberts radios and Cowshed bath kit, but also several fetching courtyards, a stone chapel, an alfresco gym and an open-air restaurant, landscaped with native grasses and flowers. The move marks the first of what the Soho House group hopes will be more Scorpios collaborations at seafront locations across the world. sohohouse.com; from €210.

Vinous wellness in the Loire

Twenty years ago, not far outside the city of Bordeaux, Jérôme and Alice Tourbier founded Les Sources de Caudalie, a wellness destination that based its ethos, and treatments, around the healing power of vines. Grape seed soon became a beauty buzzword, and the Caudalie skincare line among the more sought-after for those eschewing hard chemical “actives” in favour of natural anti-ageing treatments. This September, the Tourbiers continue the story in another French wine region: the Loire Valley. Les Sources de Cheverny sees the reinvention of an entire Loire estate (the Tourbiers call it a hamlet) offering coddling accommodations and holistic wellness, in the vein of Les Sources de Caudalie. Rooms and suites are spread across the 13-bedroom Château de Breuil and a series of independent cottages, wooden outbuildings and purpose-built structures – including a rather marvellous lakeside suite on stilts that takes its name, The Baron In The Trees, from the Calvino classic. The spa, as in Bordeaux, has indoor-outdoor pools and Jacuzzis, and treatment rooms that skew big and light-suffused, with tubs for soaking and wet-rooms for wraps and scrubs. Not that abstinence is called for; the Auberge has a wine bar stocked with the best producers in the region. sources-cheverny.com; from €200.

Copenhagen – a capital of good design and sustainable living – now has a new hotel that celebrates both. Retrofitted with quintessential spare style into the listed (and stunning) 1912 Danish Post and Telegraph Office, Villa Copenhagen showcases the efforts of a host of designers from Denmark and beyond. The majority of its 390 rooms, and several public spaces, have been co-designed by London-based Universal Design Studio (which has everything from Rimowa boutiques to Singapore’s best restaurant, Odette, to the Frieze Pavilion to its name). Original bones – cornices, herringbone floors, huge paned windows, soaring ceilings – have been preserved and polished up, but up on the roof there are beehives and herb beds along with a pool bar. The owner’s remit has specified the use of as much sustainable produced furniture, materials and textiles as possible throughout. There’s also a multimillion-dollar private art collection, curated by former Baltic Centre for Contemporary Art director Sune Nordgren, so original works abound across the Villa’s five bars and multiple dining rooms. villacopenhagen.com; from £160.

A solar eclipse sojourn in Chile

Mark your calendars for 14 December, when there will be a fairly rare total solar eclipse. One of the better places from which to view the phenomenon will be Chilean Patagonia’s Lake District, deep in the southern hemisphere. Plan South America’s Harry Hastings has a five-bedroom private retreat on hold for three days and four nights around the date, just outside Pucón – a jumping-off point for one of the world’s favoured adventure destinations, featuring volcanoes to scale, melt-water rivers to raft down and rich green valleys for days. Crucially, for when the eclipse peaks at 13:00h local time, it also boasts some of the clearest skies around (the night before, this very same bit of Chile will happen to be one of the best places to admire The Geminids, an annual meteor shower that produces as many as 120 shooting stars an hour). On the PSA agenda will be fly fishing and hiking, stand-up paddleboarding on those ultramarine glacial lakes, and as many starlit suppers as Hastings’ guests desire. plansouthamerica.com; from $17,200 per person for four nights. 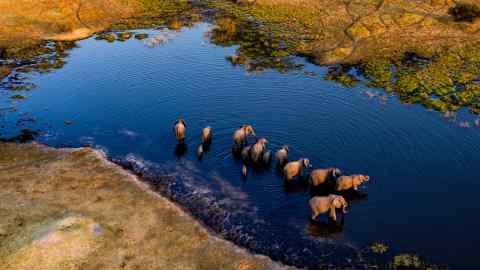