It is a gloomy Saturday morning in Warsaw, but inside the T-Mobile headquarters the sound of delighted squealing fills the room. A group of 15 children are building robots.

Nine-year-old Lucja, who wants to be an artist or a baker when she grows up, is happily bossing around younger children as they make a robot slide across the table.

The workshop is jointly organised by CoderDojo, a volunteer-led coding club for children, and Skriware, a Polish start-up that makes educational technology, including robots and 3D printers. Children aged from five to 18 are taught to code, using robots as a way to engage their attention. The free, open sessions are becoming increasingly popular but they are only a dry-run for Skriware’s real objective — to revolutionise the way science and technology is taught in Poland’s schools.

Karol Górnowicz, Skriware’s chief executive, believes the Polish education system has not kept up with technology. “[Despite all the technological advancement], the educational model has not changed significantly over the last century,” he says. “Today’s education continues to rely on memorising textbooks and, as a result, children are taught to conform rather than to innovate.”

Half of Polish schools have never introduced any new technology to classrooms, according to a report by the University of Warsaw and PCG Edukacja, an education consultancy. Some 81 per cent of students never create any kind of digital content or technology during their time at school. A small proportion might create a PowerPoint presentation as part of their homework.

Mr Górnowicz, a former consultant at BCG, the global management consulting company, wants to promote the better teaching of science, technology, engineering, the arts and mathematics (Steam) in schools.

Skriware, a Warsaw-based company, started in late 2015 making 3D printers. Mr Górnowicz says the first printers were designed almost exclusively for professionals but when the company wanted to expand their client range, they focused on a simpler and more intuitive product.

The next step was to create a set of tools to help people learn the skills needed for 3D printing. Mr Górnowicz came up with the idea of creating an online platform and a set of products to help teach these. A number of companies sell 3D printers for children, but Skriware claims to be the first to provide a whole educational programme around the technology.

Skriware plans to start selling its learning kit to individual customers in 2018. It will sell a set of equipment including ready-made pieces, electronics and a learning platform for $120. A 3D printer is sold separately for $1,800.

Children can design elements in a special application, print them out, and then build and programme a robot out of the printed pieces.

The process is created as if it were a game: a child takes part in the mission to Mars. Children can also share their design ideas and programming codes with others on the Skriware website.

The start-up has teamed up with educational institutions in Poland and the US to see if robots and 3D printer kits, developed with Dartmouth College in New Hampshire, could be introduced into school curricula.

Skriware has signed contracts with schools in the Middle East and some private schools in Poland. Inserting the programme into Polish state schools will be more challenging, Mr Górnowicz says, because of budget constraints. However, together with the Warsaw University of Technology, the company has applied for a national grant that would help them bring courses into state schools.

In the meantime, the weekend workshops are a chance to test the materials. The Skriware team observes how children react to the tasks. Their feedback has led Skriware to change its robot components and electronics manual and to re-work parts of the curriculum.

Back at the T-Mobile offices Mr Górnowicz walks between different tables — “bases”, where children are designing and constructing robots.

“It’s a truly amazing experience to observe how they evolve from passive technology users into passionate young inventors [who are] prepared to become future innovators and entrepreneurs,” he says.

Parents hover nearby, ready to help, but the children want to do everything on their own. Dorota Minczuk, Lucja’s mother, says it is a welcome change from normal science education.

“Schools concentrate on old methods of learning, which are not really attractive for pupils. And here, just look at them! You can’t take them away from these tables,” she says.

This is the second time Ms Minczuk has brought Lucja to the workshop. Before the sessions her daughter had not been interested in programming, she says. “I thought it would be a problem for her. And then something clicked in her head. I saw how she activated her spatial imagination, how she started to ponder.”

Lucja agrees — she has now upgraded computer science to second place on her favourite school subjects list, right after the arts. 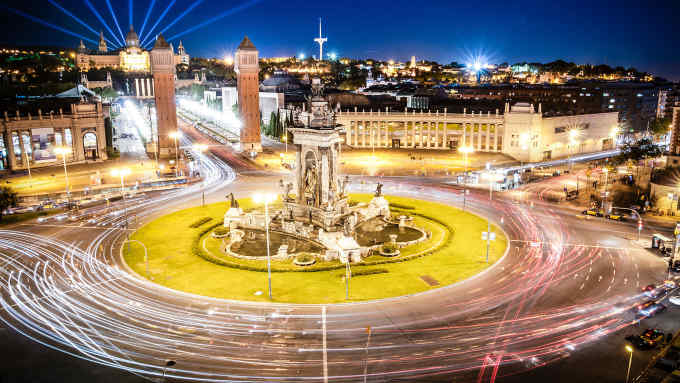