Majority of carriers face running out of money within 2 months, says trade group

Tanya Powley in London, Jamie Smyth in Sydney and Richard Milne in Oslo

The global airline industry said it will need up to $200bn in emergency support and Boeing called for $60bn in assistance for aerospace manufacturers as the international travel industry continued to bleed cash in the face of a global lockdown.

The International Air Transport Association, the airlines’ main trade body, on Tuesday said the majority of carriers face running out of money within two months because of the sudden halt in international flights by governments attempting to contain the coronavirus outbreak.

“Only 30 airlines drove the improvement in profitability that we saw in the last 10 years,” said Brian Pearce, chief economist at Iata. “Obviously, there are a number of airlines that are in a much stronger position to weather this lack of revenues but the majority are in a very fragile place.”

Boeing said the $60bn was needed to pay suppliers and maintain the health of its supply chain, which includes 2.5m jobs and 17,000 contractors. It argued for a mix of public support and loan guarantees.

The bleak outlook from Iata and Boeing comes as a large number of airlines grounded most of their fleets and announced plans to lay off thousands of staff as they confronted a crisis that executives said dwarfed previous periods of turmoil.

In a further sign of the strains the industry is under, Moody’s on Tuesday lowered the credit ratings for a host of European airlines.

The agency said it was cutting the long-term rating of low-cost carrier easyJet to Baa2, while Germany’s Lufthansa was reduced to Baa1. British Airways’ Baa3 long-term rating was put under review for a downgrade, as was that of its parent company IAG. 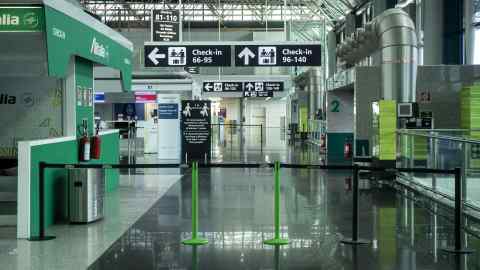 The severity of the crisis has prompted airlines to turn to governments for a lifeline. They will need between $150bn and $200bn in cash injections as well as loan guarantees, Iata said.

The trade body added that its previous worst-case scenario, made just over a week ago, that the industry could be hit with losses of up to $113bn was now “undoubtedly” too low following the virtual closure of the North Atlantic market. It is expected to make revised estimates next week.

In the UK, the Foreign Office on Tuesday advised the public against all non-essential travel globally for the next 30 days. Tim Alderslade, chief executive of Airlines UK, a trade body, said the move would bring “yet more devastation to the airline and wider travel industries”.

The US airline industry has called for $50bn in emergency support. Airlines for America, the trade body that represents the largest US passenger airlines including United, Delta and American, on Monday said it wanted the government to provide $25bn of loans and $25bn of grants.

How is coronavirus taking its toll on markets, business, and our everyday lives and workplaces? Stay briefed with our coronavirus newsletter.

The organisation warned that all seven of its members that carry passengers would run out of money before the end of the year if the crisis continued.

Governments around the world have signalled plans to step in to help domestic airlines survive a shutdown of international travel from the coronavirus emergency.

The Australian government will unveil a A$715m (US$428m) rescue package for the domestic airline industry on Wednesday. The package involves the refunding and waiving of government charges on the industry, including aviation fuel excise.

Regional Express, one of Australia’s largest regional airlines, on Tuesday warned it would not survive the crisis unless the government stepped in with support measures, including a state guarantee over new loans. Qantas and Virgin Australia have said they have enough cash reserves to survive the crisis, although Virgin has more than A$5bn net debt on its balance sheet.

Meanwhile, Norway’s political parties are discussing potential airline nationalisations and other measures but there is “great scepticism” about the state taking a stake in private carriers, said people involved in the talks. Norwegian Air Shuttle is seen as one of Europe’s most vulnerable airlines because of the low-cost carrier’s high debt burden.