Land, sea or air service poses challenge to established groups such as FedEx, UPS and DHL

Amazon has proven adept at growing businesses from scratch and by stealth. Now it is taking aim at the $8tn global logistics industry, by quietly nurturing a programme in China through which any wholesaler can use it to ship goods around the world by sea, land or air.

The service, called Amazon Logistics+, has expanded greatly in recent months to include cross-border air transportation, as well as packaging, warehousing, customs and handling services.

Logistics analysts say the new offering will increase pressure on established shippers such as UPS, FedEx and DHL — because anyone in China can use the service, not just Amazon sellers.

Amazon already runs a global retail empire and counts logistics as one of the key pillars of its business. Last year, one in six dollars of Amazon’s revenue came from its logistics business, which provides warehousing and shipping services to its sellers.

It first entered China more than a decade ago, but largely missed out on the booming ecommerce market as it was overtaken by homegrown champions such as Alibaba and JD.com. But now the company may have found a way back in.

“They [Amazon] feel that with the volume of goods they control, they can actually move the goods more efficiently than the others who are doing it,” says John Manners-Bell, head of Transport Intelligence, a logistics consultancy. “A new entrant with a focus on technology can disrupt the market quite significantly.”

Many see parallels with Amazon Web Services, the cloud computing business that Amazon launched quietly in 2006. At the time, AWS was helping meet Amazon’s own needs, because the company had such high demand for computing power. Now, that business brings in $12bn in revenues a year.

Amazon’s global business is a rare combination of retail, tech, media and logistics. But that business model has required heavy capital investments — part of the reason Amazon’s profits have been extremely low, or non-existent, for years.

The Amazon Logistics+ service began importing ocean containers into the US in November, and is bringing in between 10 and 15 containers a week on behalf of other customers, according to filings compiled by Ocean Audit, a shipping consultancy. Amazon also imports around 350 containers per week for its own use, according to the consultancy.

“It is still in its infancy,” says Steve Ferreira, president of Ocean Audit. “The reason this is so attractive for Chinese vendors is that it gives them immediate access to the American market.” 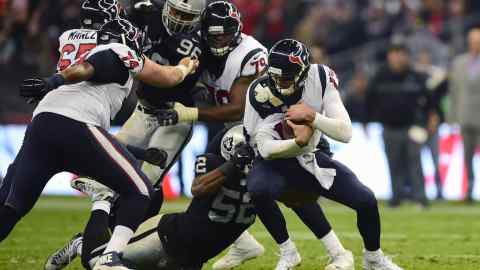 Although the programme may be small, it is sending ripples through the global logistics industry. “They [Amazon] are only a bit player at the moment . . . but they could come into competition with FedEx, UPS and DHL quite quickly,” says Mr Manners-Bell. “There’s a lot of technology that can make this industry more efficient.”

Many of the world’s biggest logistics companies count Amazon as both a customer and, increasingly, a competitor.

Until recently, manufacturers selling goods through Amazon had to deliver those goods directly to Amazon warehouses. Now Amazon Logistics+ will do that for them.

The company’s expansion in China follows other logistics investments in the US, where Amazon has leased its own air cargo fleet and purchased its own truck trailers. The company has also hired several logistics industry veterans, and it obtained a China shipping licence last year. Amazon did not respond to questions for this article.

Amazon’s moves in China will be watched closely by Alibaba, the ecommerce company that facilitates growing cross-border trade through its wholesale marketplace Alibaba.com. Unlike Amazon, Alibaba does not own any logistics infrastructure. Alibaba is a shareholder in a logistics marketplace, Cainiao, which matches third-party logistics companies for consumer shipping services, but does not own its own infrastructure.

For now, the Amazon Logistics+ service appears to be targeting small and mid-sized Chinese vendors, with one large exporter telling the FT that the service was too small for them to use.

To draw customers, Amazon is deploying a strategy that worked well for it in retail — offering attractive prices. Mr Ferreira says Amazon appears to be subsidising its ocean freight rates to sell more value-add services on either end of the journey. “They give the [Fulfilled by Amazon] sellers a sweetheart deal on the ocean and then bundle other services around it,” he says.