China has successfully launched its first independent mission to Mars, which will attempt to land an exploration rover on the red planet, the latest marker in its ambitious programme to outpace the US in space.

A Long March 5 rocket was launched on Thursday from China’s Wenchang launch pad on the southern island province of Hainan, the China National Space Administration announced.

The vessel is carrying a Tianwen-1 probe in an unmanned mission that intends to match the US and Russia by successfully landing on Mars, something that was first achieved in the 1970s.

China intends to go further than previous missions by loading up the rocket with both an orbital and landing spacecraft. A rover will be deposited on the surface to collect data about the planet’s soil and geography.

The launch is one of three that plan to take advantage of a time window when Mars is closer to the Earth than usual.

Video: China and the US: the arms race in space

Last week, the United Arab Emirates launched a mission that intends to orbit Mars but not land, while Nasa plans to launch a rocket on July 30 that will deposit the US’s fifth rover on Mars.

China’s space programme has been accelerated in recent years, closing in on the US after decades of playing catch-up. Since 2018, it has launched more rockets per year than any other country.

That rapid progress has made Europe and the US wary of an emerging arms race over space technologies.

“International political competition is expanding from Earth to space,” said Wang Yiwei, an international relations scholar at Renmin University of China. “The US sees space as a new frontier for military expansion but China has . . . said we shouldn’t militarise space,” he added. 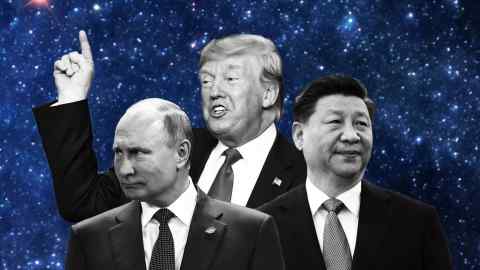 Despite diplomatic assurances, experts have warned that a space arms race is difficult to avoid, due to almost all relevant technologies having military applications.

“It's a big step to send a rover to Mars, especially one that was independently developed by China,” said Blaine Curcio, founder of Orbital Gateway Consulting.

But he added that the mission was as much about prestige as being actually useful for China, given Mars missions were not an important battleground in China-US rivalry.

“For China, it was vastly higher priority from a geopolitical perspective to have their own satellite navigation constellation in orbit, so as to not rely on the western system, than it is to send a rover to Mars,” he said.

Get alerts on Space exploration when a new story is published