Shawn Donnan in Washington, Chris Giles in London and Gabriel Wildau in Beijing

The world faces a growing “risk of economic derailment” and needs immediate action to boost demand, the International Monetary Fund warned on Tuesday as new figures pointed to the worst monthly collapse in Chinese exports since 2009.

Speaking in Washington, David Lipton, the IMF’s influential second-in-command, warned that the global economy was “clearly at a delicate juncture”.

Policymakers around the world need to take urgent action to respond to slowing growth and fresh threats posed by turmoil in commodity and financial markets, he added. 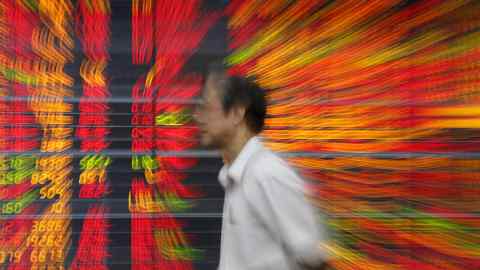 “Now is the time to decisively support economic activity and put the global economy on a sounder footing,” Mr Lipton told the National Association for Business Economics.

Among the “most disconcerting” signs of trouble in the world economy, he said, were “a sharp retrenchment in global capital and trade flows” over the past year.

Those concerns were highlighted by the weak trade figures out of China on Tuesday. They showed both imports and exports falling in February as China’s demand for commodities such as crude oil, iron ore and copper fell and weaker global demand dragged on exports of manufactured goods.

In dollar terms China’s exports fell 25.4 per cent in February from a year earlier, the worst one-month decline since early 2009 and down from an 11.2 per cent drop in January. Imports fell 13.8 per cent, trimming losses after an 18.8 per cent fall in January.

The IMF is growing increasingly concerned about the state of the global economy because of what it sees as signs of a further slowdown. It has already said it is likely to lower its 3.4 per cent growth forecast for this year when it issues its next round of predictions in April.

It is not alone. The OECD on Tuesday said leading indicators pointed to easing growth in the UK, US, Canada, Germany and Japan.

China’s economy has also shown signs of slowing further this year after growing at its slowest pace in a quarter century in 2015. At the opening of an annual parliament meeting on Saturday, Premier Li Keqiang recommitted to a target of 6.5 per cent average growth over the next five years, a goal that many economists believe is unrealistic.

Some economists have begun to push back against the gloomy prognostications for this year.

In an unusual intervention, economists at the Washington-based Peterson Institute for International Economics led by Adam Posen, former policymaker at the Bank of England, and Olivier Blanchard, former chief economist of the IMF, argued on Tuesday for a “reality check”.

Pessimism in financial markets about the state of the global economy was overdone, they said.

“The probability of another 2008 [financial crisis] is inconceivable,” Mr Blanchard said.

But in his speech Mr Lipton argued that the global economy was at a point where a new downturn risked become a self-fulfilling reality if the world failed to act to boost demand.

Of particular concern, he said, was the perception in financial markets “that policymakers in many economies have run out of ammunition or lost the resolve to deploy it”.

“For the sake of the global economy, it is imperative that advanced and developing countries dispel this dangerous notion by reviving the bold spirit of action and co-operation that characterised the early years of the recovery effort,” he said.

Doing so meant that the world’s leading economies needed to mount a “three-pronged” response to boost growth by rolling out “pro-growth” fiscal policies, doing what could be done on the monetary front and pushing forward with structural reforms to improve the global economy's growth potential.