Museums get behind metal detectorists in their quest for treasure

May 9, 2020
Jump to comments section Print this page

Metal detectorists and archaeologists are historically not close friends. Having been accused of seeking treasure with no regard to archaeological context, detectorists are now belatedly recognised for adding significant jewels to the crown of our past.

This shows how the sentiment around metal detecting has changed. “Roughly 95 per cent of reported treasure is from metal-detector users, with the rest being found by archaeologists and by chance by people digging in their garden,” says Ian Richardson, senior treasure registrar at the British Museum. “Anyone who finds treasure has the legal obligation to report it.”

It is not only archaeology that has benefited from this development but also the jewellery world. “Between 60 and 70 per cent of treasure finds are jewellery,” says Michael Lewis, head of the PAS.

Some of the sparkliest pieces go on show in museums while other items are preserved and kept in the nation’s homes. A few items looted by nighthawks, as rogue metal detectorists are called, have become the subject of front-page news stories.

Significant jewellery finds include a late medieval cluster brooch uncovered in 2017 by detectorist Justin Owens, who was scanning a former royal hunting ground in Brigstock, Northamptonshire.

The piece, which dates from between 1400 and 1450, was acquired in March by the V&A museum in London and has been valued at £30,000. It features fine gold and enamel work in the shape of a flower and includes a central cabochon spinel, two diamonds and pearl petals.

“It is the only one of its kind to be found in the UK, and one of only seven known examples in the world,” according to the V&A.

When someone makes a potentially significant discovery, it is usually reported to one of the 41 PAS finds officers in the UK. 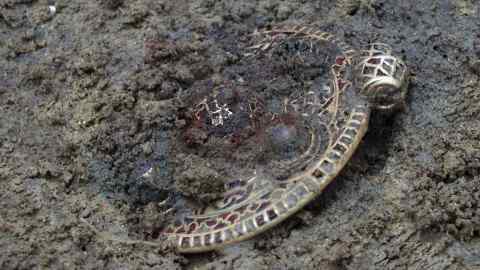 Eleanore Cox, the finds officer for Northamptonshire, says: “Not all jewellery pieces are acquired by museums because they can be hard to explain. Think of a ring with an inscription on the inside: it’s very hard for a museum to display.”

Other discoveries in which Ms Cox has been involved include the unearthing of a Roman gold pendant by a metal detectorist two years ago, and acquired by Daventry Museum.

“It looks like it could have been made last week,” says Ms Cox. “It is exceptional. It came in at a finds event. A metal detectorist went out on a whim and found it.”

Some items go to the British Museum or the National Museum Wales, although generally local museums have first choice if they can raise the necessary funds to reward finders and landowners. In March, the British Museum acquired a 3,000-year-old rarity. The Shropshire Marches bulla, a gold sun pendant, was discovered in 2018 by a metal detectorist who wished to remain anonymous.

The piece features a stylised solar design, with arcs and triangles, that reflects the importance to ancient farmers of the sun’s daily and annual track.

“It is unique and highly unlikely we would find something like that again,” says Peter Reavill, the Shropshire and Herefordshire finds liaison officer, to whom the find was reported. “It was valued at £250,000. Most finds come in at under £500. In 18 years I’ve seen two or three cases worth more than £10,000. From the point of view of value, the majority of metal detectorists are going to find the best part of nothing.”

The antiquities scheme divides jewellery into various categories. Mr Richardson of the British Museum says: “We have a category for an object type called jewellery on the PAS website but it is for things that can’t be described more specifically. 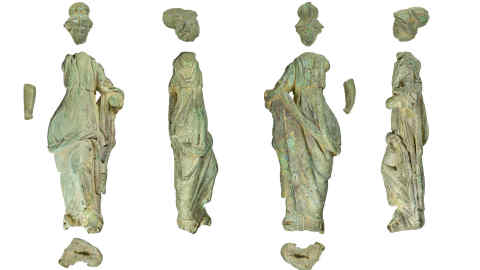 These are all things that have been found and recorded since 1997, when the treasure trove laws were updated in England, Northern Ireland and Wales. Scotland’s rules are still based in common law.

Mr Lewis adds: “Jewellery is a category used when you don’t know what something is. We use the subsections more often on the antiquities scheme.”

Another piece of jewellery discovered in the past few years is an early medieval gold and garnet pendant, known as the Winfarthing Pendant, found by a metal detectorist in Norfolk.

Helen Geake, the county’s finds liaison officer who featured in Channel 4’s Time Team archaeology programme, was called in when a detectorist got a positive hit at the foot of a grave. “He called us and we excavated,” she says. “The pendant was bigger than anything that’s ever been found.” It was acquired two years ago by Norwich Castle Museum, and has been valued at £140,000.

The quality and quantity of jewellery varies according to when it was made, says Ms Geake. “In the early Anglo-Saxon period, women were buried with their jewellery. The eighth century is full of quite dull alloy brooches but occasionally you find the most remarkable things. It is the same in the fifth century. There isn’t a lot that stands out but there are always a few to mess up the pattern. The 12th century is pretty slim pickings.”

Q&AUK property
If treasure is found in my garden, can I keep it? 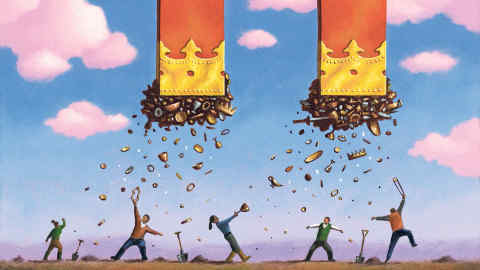 Not everything can be acquired by museums. “If something is in wearable condition, it is massively more expensive to buy. Often museums can’t afford it.” she says.

Schemes similar to the PAS exist elsewhere in Europe and include Portable Antiquities Netherlands and Dime in Denmark, with FindSamp being set up in Finland. The situation in Belgium is unusual, with the MEDEA database and licensing covering only Flanders; metal detecting is more strictly controlled in the French-speaking part of the country.

Mr Lewis says that most finds in Britain are acquired by local museums. “The British Museum will step in as a last resort.”

Get alerts on UK arts when a new story is published