Jawar Mohammed claims he was arrested for ‘challenging’ the federal government

A leading Ethiopian opposition politician and media entrepreneur has rejected charges of terrorism brought against him as politically motivated.

Jawar Mohammed, a former ally of prime minister Abiy Ahmed, appeared in court on Monday after being charged alongside 23 others with “inciting ethnic and religious strife, and inciting one party against the other” as well as terrorism, telecom fraud, and breaking firearms laws, according to a statement posted on social media this weekend by the office of Ethiopia’s attorney-general. If convicted, he could face life imprisonment or even the death penalty, said his lawyer, Tuuli Baayyis.

The trial will be watched as a test of whether the political openness promoted by Mr Abiy can be maintained amid growing ethnic and political tension. Ethiopia, a country of 110m people, has been one of Africa’s most successful economies, but it has been beset by fractious politics for decades.

“The reason why I’ve been detained is only because we’ve challenged the government,” the Stanford-educated Mr Jawar told a federal high court in Addis Ababa, according to Mr Tuuli, who spoke to the Financial Times.

“I’m really very proud to be charged under the antiterrorist law because the government knows, the public knows, and me myself I know 100 per cent that I’m not a terrorist. I have never committed any kind of crime,” Mr Jawar said, according to Mr Tuuli. Mr Jawar did not enter a plea.

Ethiopia has endured months of deadly unrest in the wake of the killing of a popular Oromo singer and amid concern over some of Mr Abiy’s reforms.

Analysts believe the charges against Mr Jawar could further inflame tensions in the run-up to a landmark national election — originally scheduled for August but postponed until next year because of the coronavirus pandemic — while galvanising opposition among his ethnic Oromo group.

“Jawar is seen as an icon within many Oromos and a national election with popular figures like him behind bars will hamper the possibility of having a free and fair election, which was Abiy’s promise,” said Abel Demissie, a fellow of Chatham House’s Africa Programme.

Security forces arrested Mr Jawar, a senior member of the Oromo Federalist Congress party and founder of the Oromia Media Network, in late June following the killing by unknown assailants, of Hachalu Hundessa, a popular Oromo singer. The murder unleashed a wave of violence that led to some 9,000 people being arrested, mainly in the region of Oromia, and left at least 178 people dead.

Mr Jawar was a central figure in the Oromo protests that helped bring Mr Abiy to power in 2018, but he later fell out with the Nobel Peace laureate. Mr Abiy, a former army intelligence officer, is also from Oromia, but many Oromo, such as Mr Jawar, have accused him of betraying their cause.

Since coming to power in 2018, the prime minister has sought to push through liberal economic and political reforms while stressing Ethiopia’s national identity in a way that critics say threatens the autonomy of the ethnic-based states, such as Oromia, in the country’s federal system. 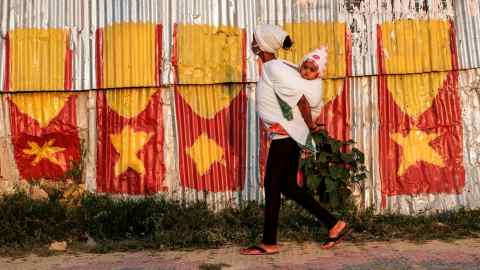 Merera Gudina, the chairman of Mr Jawar’s political party, said Mr Abiy is trying to suppress dissent. “These are the usual trumped-up charges as part of the strategy of weakening the opposition by the ruling party,” said Mr Merera.

Government officials have dismissed such criticisms, saying the priority is to secure law and order at a time when, coupled with the rise of previously suppressed ethnic tensions after decades of authoritarian rule, opposition to Mr Abiy has led to deadly violence in parts of the country.

Mr Jawar was not arrested because of “his political activism”, Billene Seyoum, Mr Abiy’s spokeswoman, said last month. The majority of those arrested “are the ones that went out and started destruction in particular areas”, she said, adding “and their organisers and their kingpins”.

Get alerts on Addis Ababa when a new story is published