Collaborative robots market expected to snowball to $12.3bn by 2025

The top engineers at Qualitetch, a metal components manufacturer in the English town of March in Cambridgeshire, gathered around last November when Eva arrived for her first day of work.

A film crew was on hand to capture the moment, as intrigued staff caught a glimpse of the new employee tasked with the most mind-numbing of jobs: loading metal sheets on to a conveyor belt.

Eva, of course, is no ordinary employee. She is a “cobot” — a collaborative robot — with no mind to numb. At £5,000, the nimble white arm was designed to cost a fraction of the price of competitors so it could be deployed at small companies like Qualitetch, a 38-strong team with £3m in revenue.

For Alex Craig, owner of Qualitetch, Eva’s arrival was like Christmas morning. “I had been looking forward to this for more than 12 months,” he says. It was his first opportunity to introduce true automation at the factory.

According to RobotWorx, a company that sells new and used robots, industrial robotics typically cost $50,000 to $80,000 per unit. “On a single-shift operation as we are, that’s not practical, it’s not economic,” Mr Craig added. “But we can shell out five grand per unit. It’s a complete no brainer.”

UK-based Automata, which created Eva, was founded in 2015 on the assumption that thousands of small- and medium-sized manufacturers think the same way, opening up a whole new niche.

“In the current landscape, automotive is still 40-50 per cent of the robotics market,” says Suryansh Chandra, Automata’s co-founder. “But new markets are opening like they never have before”

Since 2016, BSH has been using “flexFellow” robots made by the German manufacturer Kuka — to take over monotonous tasks considered “ergonomically inconvenient” for people. Each robot is tasked with picking up screws and then fastening a pump well to the bottom of each machine. BSH was able to install the system without overhauling the workstation, slotting the robots into the seven assembly lines like any other member of the staff.

Demand for such cobots is expected to snowball in the next decade. A study by Markets and Markets projects 50 per cent growth a year, from just $710m of sales in 2018 to $12.3bn in 2025. The study said the already-high return on investment should result in growing adoption as software improvements make cobots better at imitating human behaviour.

Kuka is one of the leaders in the field, though it is best known for the orange robotic arms that help manufacture cars at Tesla and BMW. Another is Denmark’s Universal Robotics, a cobot pioneer founded in 2005 and acquired a decade later by Teradyne for $285m. By the time of the acquisition, UR had already sold 4,000 cobots.

Automata faces intense competition. The 45-member start-up has just emerged from “stealth mode” and shipped its first products earlier this year. By late 2019 it hopes to have increased production from “tens per month to hundreds per month”, says Mostafa Elsayed, the other co-founder.

But he and Mr Chandra say the big players are not really their rivals.

“When we think about competition, we don’t think about Kuka,” Mr Elsayed says. “They did a fantastic job on the avant-garde of robotics, taking us to a place where we can now have this conversation, [but] their products don’t serve the customers we care about.”

Their niche is companies with fewer than 100 employees that want to automate tasks, but have so far has found it unaffordable. Automata’s pitch is while Eva is less sophisticated than other robotics on the market, it costs less and the software is easy to use.

The set-up and programming of Eva is simple enough for Qualitetch to have even made an “unboxing” video of the experience — the kind that have become popular on YouTube for electronics and children’s toys. “The actual arrival to functional use was about two hours,” Mr Craig said. “The actual programming was ten minutes.”

Other robotics companies, says Mr Elsayed, are focused on making their products faster and smarter. But he is more concerned with how non-specialists can deploy them, learning by doing rather than reading a manual: “It’s more like the first time you use your iPhone. You learn one thing after another.”

Automata says it has been able to simplify operations because virtually everything is done in-house, from software development to engineering the set of components transmitting power to the robot.

They even automate their own production line so robots are, in effect, creating robots, Mr Chandra says. “You learn so much more about what you make when you become your own customer.” 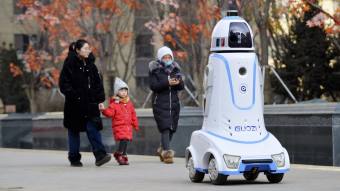