This month Hurly-burly, a three-way exhibition featuring Phyllida Barlow, Rachel Whiteread and Alison Wilding, will open at Gagosian Paris. It takes its title from Macbeth – “When the Hurly-burly’s done, When the battle’s lost and won”. It’s a surprisingly gleeful name for an exhibition from three of Britain’s most admired modern sculptors, as well as a tribute to their friend the late gallerist Karsten Schubert, who once called them “the three witches”.

But are they really very witchy? “I feel like I can guess what people are going to say,” says Whiteread, the 1993 Turner Prize winner, now 59, from her home in north London. “I have funny déjà-vu things.” A pause. “I probably would have been burned at the stake, yeah. And I’ve got a good cackling laugh as well!”

“It’s possibly there – who knows?” says Wilding, 74, who taught alongside Barlow in the 1980s at Brighton Polytechnic, where they first met a young, ambitious student, Whiteread. “I don’t go around with a huge number of artists except Rachel and Alison,” says Barlow, the oldest of the three at 78, who enjoyed a sudden rocket to art fame 12 years ago. “So I suppose I’m witchy in the sense that I rather keep my distance.”

Hurly-burly is, for all the mischief, an opportunity to hear three very different artists in conversation – although there hasn’t been much of a pre-chat. Each is contributing at least four works, new and old, without knowing what the others have, and each is as excited as the other to see what will emerge from the cauldron. “Phyllida, Rachel and Alison have been the source of inspiration for generations of artists,” says Cristina Colomar, director at Gagosian, “but we hope this exhibition will continue to reach new admirers of their work and extend their seemingly endless sphere of influence.” To an outsider, then, it seems an ideal way to compare three major players in the past three years of British art. To the trio in question, however, it’s mostly a fun way to sum up 40 years of friendship. They are aware that they have affected each other deeply, but tend to view each other’s work as radically different.

I probably would have been burned at the stake. And I’ve got a good cackle!

“It seemed like a nice idea to play around with, and to be surprised by each other’s work,” says Whiteread, who suggested the idea to Gagosian in 2021, after Wilding had first mooted it years ago. “It’ll be great to see how all this works together, and see if there are any similarities.” She is contributing a selection of woods, papier-mâchés and bronzes painted blue, pink or yellow – not how many may normally think of her and her monumental casts. Yet it’s also very suitable, since it’s as a BA student of painting that Whiteread first met her friends, who were teaching in the buzzy sculpture department downstairs. Whiteread nearly did an MA in painting too, but ended up following Barlow and Wilding to the Slade to study an MA in sculpture, setting her on a career-defining course.

Barlow, based in north London, is finishing off her sculptures when we speak one autumn afternoon. “I suppose I’m scared that my pieces will be too big,” she sighs. “I’m scared that they will be ugly things. I’m very good at ugly! There’s a creeping sense of wondering whether I will overstep some mark.” True, her work made from more prosaic materials such as cardboard, cement or polystyrene can be lumbering, but it is often joyous, too. “Sort of a bull – or cow – in a china shop!”

The conversation of each artist is seasoned with deep affection, with their varying personalities coming through: Barlow is warm and garrulous, Wilding sensitive and private, Whiteread no-nonsense and focused. Barlow first met Wilding in 1969 when as a very young tutor at Chelsea College of Art she interviewed her for a place there. “She took everybody by surprise,” says Barlow. “Her work, and the way she is: utterly unique and quite extraordinary, with a razor-sharp mind.” Wilding “absolutely” remembers her first encounter with Barlow, “because she was lovely. She was exactly the same then as she is now.” (Whiteread’s impressions corroborate this further. “Phyllida laughs a lot, so you’d hear her laughing. Alison was more serious!”)

In the Gagosian show, Wilding is providing a selection of typically handsome and cerebral sculptures, made from alabaster, bronze, brass or oak. If she is by her own admission the “wild card” here, she is hardly an unknown, having been nominated for the Turner Prize twice, shown all across the UK and gained an OBE. She is certainly unfazed at the idea of showing at Gagosian. “Why would I be scared?” she scoffs stoutly. “It doesn’t scare me.”

Extraordinary people are on their own course

Both Wilding and Barlow recall meeting Whiteread as a 19-year-old student in Brighton in 1982. At that point Wilding was already “reasonably hot” by her own assessment, while Barlow had started a family with her husband Fabian Peake, very quickly having five children and showing work when she could. Barlow can still see Whiteread in their first tutorial. “This very striking redhead, elegant and articulate and decisive, and an aura of determination. That’s not always there with our students.”

Whiteread doesn’t deny her determination. “I’d just go to them and say, ‘Can I see you for a tutorial?’ It was quite cheeky… but I knew what I wanted so I went for it.”

Barlow and Wilding were, Whiteread insists, “very good teachers”. Sometimes the relationship has seesawed: if Whiteread was once mentored by Barlow, she was later able to help the elder artist when she began to gain serious recognition: “I was able to help her navigate some stuff about the contemporary art world, which is a minefield.”

Barlow, though, almost chokes at the M word. “Oh no, no, no. Absolutely not. No mentoring! Absolutely not. I think extraordinary people are on their own course.” It’s left to Wilding to say what many have said over the decades. “Phyllida has been a really, really inspirational teacher. Hundreds and hundreds of students have been taught by her who just think she’s the best.” (Other alumni of hers include Douglas Gordon, Tacita Dean and Conrad Shawcross.) “She’s been absolutely brilliant.”

Barlow, who has an enjoyably black sense of humour, remarks that the ’80s were a particularly tough time for her as she strove to make ends meet, but with no note of complaint. “I always enjoyed talking to students who were struggling,” she says tellingly, “because I knew about that.” As a student at Chelsea College of Art in the ’60s, she got strong feedback from another famous teacher: Henry Moore: “He told me I couldn’t draw!” But he did say it kindly, she adds, “and I mean, I’m sure he was right, they were probably awful drawings…”

Whiteread very quickly found extraordinary fame, winning the Turner Prize aged just 30. “I certainly didn’t find a lot of it easy,” says the artist, who has opened up recently about her struggles with mental health. “It had its problems having the spotlight on you all the time.” For Wilding, watching her former student become an internationally lauded artist was definitely strange. “But I would say Rachel has been a fantastic friend to me. I regard both of them as really dear close friends. Not necessarily about work, but just about everything else in life. When my husband died five years ago… you know how friends can be when you really, really need them? They were both like that. I think that is really the strength of our relationship.”

Does gender matter, especially in the notoriously sexist art world? Wilding believes it “matters massively”, recalling how many star male artists she showed with in the ’80s were “so sexist, so pushy”. Yet Barlow is cautious about getting caught up in the “woman-artist prefix”. “My hope is it’s not a defining thing about how art should be understood… I think that being female, being women, is there – but I don’t think it’s how we would define our friendship and its longevity.”

Each is looking forward to Hurly-burly’s installation, with both Whiteread and Wilding saying it’ll be “a giggle”. When they meet up these days, they don’t discuss their own work – they have a laugh over a meal with a bottle of wine. They are all very sensible now, says Whiteread, who promises her pub days are behind her – although “I can be totally unprofessional when I want to be”. 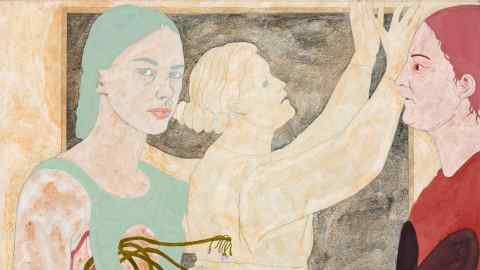 How would they describe each other in three words? Barlow says of Wilding, after much thought: “True. Intense. Private.” On Whiteread: “Focused. Seeking. Resolved.” Whiteread protests at the question, saying it’s too hard, but then provides a flurry of nice adjectives; notably, though, she describes each friend as “brave”.

It’s Wilding, supposedly the most inscrutable of the three, who opens up the most. Whiteread is “my dear, dear friend”, she says warmly, and Barlow is “my beautiful friend”. Are witches meant to be this kind?