The Mexican artist presents their most personal exhibition to date

For those who saw Manuel Solano’s low-key pop paintings at the New Museum Triennial earlier this year, ICA Miami’s intimate exhibition might come as a surprise. No references to Michael Jackson or to 1990s supernatural-horror films here. Instead, the Mexican artist’s first US institutional show, titled I Don’t Wanna Wait For Our Lives To Be Over, features more introspective works spanning painting, film and photography.

Memory, and its relationship to perception and identity, is a central concern for the 31-year-old, gender-non-conforming artist — Solano adopts the pronoun “they” — who was left legally blind as a result of HIV-related complications in 2014. But it’s queer kinship that appears as the thematic glue holding the show together, the works’ various protagonists — including a parent, a stranger and a rock star — all displaying a resemblance to the artist. This is an autofiction of sorts, in which Solano’s alter egos appear as good and evil twins.

Two black-and-white portraits oddly mirror one another across the gallery. It is a collaboration between the artist and their mother, Claudia, who was once an aspiring photographer and is today Solano’s primary carer. Each has created a portrait of the other. Solano’s naive-style, unstretched painting is based on an old picture of their mother, engraved in their memory. But it feels a little bland for Solano, whose most compelling works feature striking colour contrasts against a raw, finger-painted texture, such as in the series Blind Transgender with AIDS (2014) or “Untitled” portrait of Michael Jackson (2017). Claudia’s large-scale photographic portrait of Solano — revealing scars left by a skin infection — is conceived to mimic Solano’s portrait of her. This creates an intricate correspondence between the works and adds depth to the show’s core theme, even if the individual works themselves are a little underwhelming.

On the adjacent wall, the central work of the exhibition is a painted diptych (also unstretched), “In The Metro or She’s Not Pretty.” It depicts Solano’s encounter with a female stranger on the metro, whose uncanny physical resemblance left them both momentarily speechless, staring at each other. The works are remarkable for their playful details (the window’s reflections, for instance, cleverly clarify the scenario) and for their comical evocation of life’s absurdity.

Two video pieces complement Solano’s paintings. One of them, “The Victory of Good Over Evil” from 2012 (the only work made before 2018, and before the artist’s visual impairment), shows a young Solano, head shaved, re-enacting Sinéad O’Connor’s notorious 1992 performance on Saturday Night Live. Like the Irish singer, the artist tears up a picture of John Paul II, urging their audience to “fight the real enemy”.

It is possible that Solano is addressing themselves, in their fight with their inner demons — a struggle in which neither good nor evil will ever triumph. During a recent studio visit in Mexico City, the artist told me this would be their most personal show to date. I can see that. Yet while existential concerns imbue Solano’s art with a new depth, I miss the raw, camp, expressionist qualities so distinctive of their earlier works, particularly in painting. These now appear diluted in ever more elaborate figurative techniques, as if Solano is striving to regain control over the visual world at least. But if good and evil coexist, it shouldn’t be impossible for figuration and expression to do likewise. 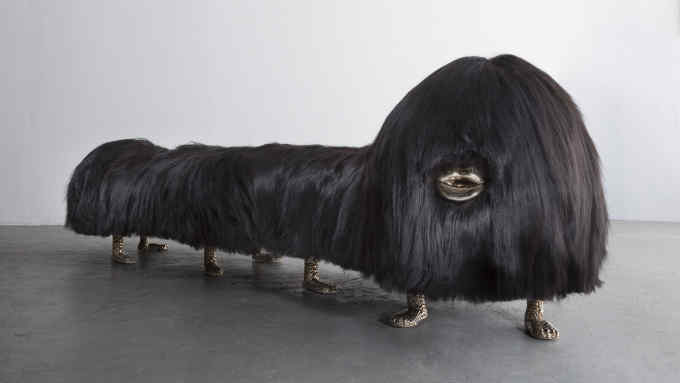