Ones to watch: The rise of online-only money

There are hundreds, if not thousands, of digital currencies but only a few have significant support. Most so-called alt coins are likely to remain niche instruments. Many who put cash into them are speculators who hope wider take-up will send their investments soaring. But digital currencies have now caught the attention of financial institutions and central bankers. Here are some of the popular digital coins that are currently available.

The first digital currency to gain widespread adoption has the highest market value at about $11bn. Since its creation in 2009, bitcoin has demonstrated that the algorithms driving it are robust. However, it will be forever tainted in the eyes of many because of its use by criminals on dark-net sites and its association with scandals in which customers’ bitcoin were stolen from hacked exchanges. It runs on an open-source protocol that operates across a network of users’ computers. But its flaws are preventing it from being more widely adopted so it can become a means of payment as big as MasterCard or Visa.
Market value: $11bn. Price per coin: $687.41

The second-biggest digital currency is ether, an open-source, decentralised currency running on the Ethereum blockchain. The Ethereum project takes virtual currencies further than bitcoin, by developing new applications on the underlying technology. One innovation is exchanging ether using legally binding contracts stored on its blockchain, the distributed ledger infrastructure on which it operates. Companies such as IBM, Microsoft and Samsung have experimented with Ethereum’s protocol.
Market value: $1bn. Price per coin: $11.26 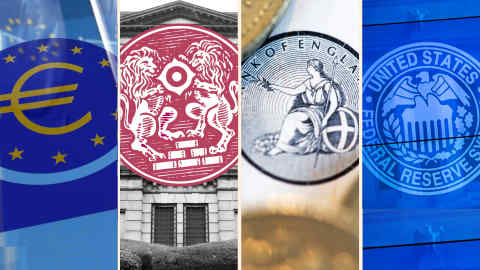 This cryptocurrency came into being in 2016, when the creators of Ethereum decided to split Ethereum’s blockchain after a hacker stole millions of dollars in customers’ deposits. But this move outraged many who believed a core principle of blockchain — that it was tamper-proof — had been violated by its founders in an effort to protect depositors’ funds. They stuck with the original chain, however, so although Ethereum and Ethereum Classic were once in fact the same algorithm, the two have since become separate currencies despite sharing a similar name.
Market value: $84m. Price per coin: $0.98

Ripple is working with banks including Santander and UBS to develop the infrastructure to allow financial companies to make payments to each other across borders, a core aim of the sector. It aims to be faster and cost less than the infrastructure banks use. It would offer services in competition with existing providers such as Swift, which provides secure financial messaging products.
Market value: $298m. Price per coin: $0.008376

Originally named Darkcoin, this currency began to gain popularity in 2015 by vaunting its privacy benefits. Dash’s network operates in much the same way as bitcoin does, but it is designed to add an extra layer to transactions, mixing them up so it is difficult to link the buyer and seller.
Market value: $65m. Price per coin: $9.49

If bitcoin is gold, Litecoin is silver. That was the principle stated by its founder, a former software engineer at Google. Although it was inspired by bitcoin, it was designed to offer an edge over its rival in that its network can handle more transactions more quickly.
Market value: $193m. Price per coin $4.01

Figures correct at time of publication