Enlightened Norway’s gender paradox at the top of business

Opposite Norway’s parliament building is a relic from another era. Norske Selskab is one of the world’s oldest gentlemen’s clubs, dating back to Norway’s fight for independence from Denmark, with a fine private collection of art, a billiard table and a wood-panelled library.

Many of Norway’s top business leaders — as well as some from the cultural and public sectors — are members. There is one glaring exception: the club admits no women. They are allowed to visit for “special occasions” only.

“It is an anachronism, pure and simple,” says one of Norway’s top businesswomen. Another female business leader adds: “It is something of a symbol of the difficulties we have.”

Its prime minister is a woman, as is the finance minister, and the head of the powerful employers’ association. All three parties in government are led by women. In the public sector, a majority of leaders are female. Thanks to a quota law from a decade ago, the boards of its public companies must have at least 40 per cent female non-executive directors. After the law came into force in 2008, a stream of foreigners visited Norway, keen to see its experiment in board engineering. Ten years later, the number of female directors is higher but any trickle-down effects are hard to see.

The glaring omission is female business executives. Of 213 public limited companies in 2017, just 15 were run by a woman — 7 per cent of the total in this respect. Norway does far worse than many other countries, nearly all of which are supposedly less focused on gender equality. So the big question — for everyone, not just Norwegians — is why?

Linda Hofstad Helleland, Norway’s minister for children and equality, says: “There is not an easy answer.”

Norway is in most ways a great place to be a woman and work. Childcare is good and cheap, and all one-year-olds are offered a nursery place. That is partly an attempt to push women back into work as fast as possible after maternity leave. “It’s easy for women in Norway to combine work life and family life. Gender equality has been our goal in Norway for decades. The gender pay gap is decreasing,” says Ms Helleland, a centre-right minister who has two young children.

Norway ranked second of 144 countries in the World Economic Forum’s Gender Gap Index in 2017, in a list dominated by the Nordic countries and Rwanda. What has worked well in workplaces from hospitals to trade unions has, however, not translated into the private sector. Ms Helleland frames the paradox as one of national importance.

“When I took over as minister I asked: why are we doing so bad when it comes to women and equality at the top of the private sector and business life? It’s not just important because I think women should be CEOs, it’s also important for the welfare of Norway. If we’re going to maintain our welfare into the future, we need the best people at the top of our companies. Why are we using only half of our population?”

Kristina Jullum Hagen, head of the labour market and social affairs department at the Confederation of Norwegian Enterprise employers’ association, notes that more women are going into the public sector. About 70 per cent of public sector workers are women, while more than 60 per cent of private sector employees are men, according to Statistics Norway. 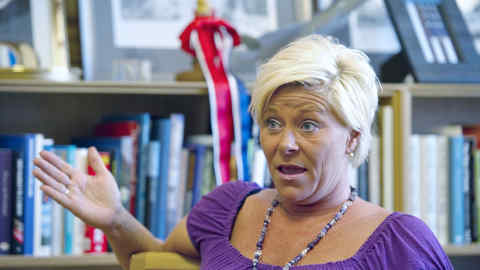 One problem, cited by several women, is the lack of female role models. Some of the most prominent businesswomen in Norway are daughters of rich company founders. Then there is the negative media coverage around several other women in the spotlight.

Anita Krohn Traaseth, head of Innovation Norway, has faced intense criticism for hiring a billionaire daughter. Similarly, some commentators have wondered if gender played a role in the recent ousting of Berit Svendsen, a senior executive at telecoms operator Telenor, despite denials by the company.

“There are very few female role models in business,” says Ms Helleland. “It’s difficult to understand why. I don’t think you are attractive to the best people out there if you don’t have enough women at the top.”

Asked about the criticism levelled at top female managers, Ms Hagen replies: “Being a top manager in either the public or private sector is about putting your head on the block. As a female top executive in the private sector, you are more visible as you are in such a minority.”

Is legislation the answer?

Both the centre-right government and companies are in agreement that new laws are not required. Board quotas worked for the small number of public companies but turned out to be too blunt an instrument to tackle the executive problem. Strikingly, however, the private limited companies, which are far larger in number than their public counterparts, have more female executives — about 16 per cent — even though they have fewer female board members, at about 18 per cent.

Ms Helleland says three-quarters of recruitment is down to informal networks: “Men recruit men. Men recruit CEOs that look like themselves. We need to challenge these attitudes.” So she and the minister of trade and industry invited many of Norway’s top business leaders to the prime minister’s residence to challenge them on why they are not doing more.

Ms Hagen, of the employers’ confederation, says: “One soft instrument we are now applying is to encourage companies to ensure there’s one candidate of each gender in the last recruitment round.”

There are other factors at play. Some women suggest the quota law for directors may have had the effect of pushing a number of women on to a non-executive track rather than a management one. Ms Hagen disagrees that is the case.

Another challenge is the nature of that vaunted childcare. Kindergartens open early — usually by 7.30am — but nearly all close by 5pm at the latest.

“We have a very well built-out social infrastructure that is designed to meet the needs of the typical ‘nine-to-five’ worker. If you have needs that go beyond that, you get no help from the state,” says Ms Hagen.

Yet she adds that some businesses like hiring women with children “as they are so efficient”.

Another business leader points to a separate childcare issue: taking on a nanny is still frowned upon in Scandinavia, she says, citing former Danish prime minister Helle Thorning-Schmidt, who did not have one when in office.

Ms Hagen tries to strike an optimistic note, underscoring that among Norway’s leading companies overall the share of women in top leadership positions has slowly ticked up from 18 per cent four years ago to 20 per cent in 2016 and 22 per cent today.

It is equally clear that the lack of straightforward answers in Norway, a paragon of gender equality, shows just how far there still is to go.