Long a symbol of scrappy resourcefulness, these recycled weavings are now more stylish and cosmopolitan than ever

The rag rag is unique for being ubiquitous. From the High Atlas Mountains to the Scandinavian archipelagos, countless cultures harbour traditions of rugs woven from upcycled fibres – fragments from bedsheets and tablecloths, food sacks, sails and shirts.

Whether braided or coiled, hooked, pegged or prodded, the craft of making one is as versatile as the language it adopts: a clootie to a Scot, peggy to a Yorkshireman, or proggy to a Northumbrian. Self-taught textile artist Betty Wood, from Northumberland, recalls a pink rug in her grandparents’ bedroom and another by the fireplace of her Auntie Nelly – “not a fancy colourful one, but one made with burlap sacking and old clothes”, she says. “It would be switched out periodically.”

Step into a Scandinavian summerhouse, meanwhile, and your feet are likely to encounter the striped weave of a Swedish rya, or Finnish ryijy. On a June morning on Finland’s shores, you are just as likely to witness the annual carpet wash, where rugs are scrubbed in salt water before being left out to dry. Helsinki retains dozens of “washing piers” or mattolaituri along the Baltic Sea, with some hosting chic waterfront cafés and bars. Family-run Finarte, Finland’s foremost rag-rug brand, continues one of the world’s oldest rag-rug lineages that dates back at least to the 18th century. Finarte co-founder and self-proclaimed “colour designer” Eija Rasinmäki has spent five decades breathing new life into the classic ryijy design, weaving from her mill in Oitti.

“It’s such meaningful work because you are carrying a tradition from one generation to another,” she says. Bespoke pieces (from €650) are popular with international buyers, including New York interior designers, hotels in Hawaii and the BVIs, a former curator of MoMA and even Woody Allen. Finarte is now planning weaving workshops and a competition for young designers. “This is a huge trend,” says the company’s CEO Larissa Immonen, “upholding all the values that are important in the 21st century – we value handicraft, we value recycled materials and tradition, and we want to revive it.”

It’s easy to get lost in loops

In Morocco, a shift from nomadic pastoral life and the corresponding scarcity of sheep wool since the 1960s have sparked new iterations of the Berber or Amazigh carpet-craft. Boucherouite rugs are woven instead from found or upcycled natural and synthetic fibres, with designs liberated from the strict geometry of traditional woollen rugs. Concentric lozenges, lightning streaks and dizzying scarps are conjured in vivid colour. In 2010, New York’s Cavin-Morris Gallery hosted Rags to Richesse – a turn of the tide for the boucherouite. Even if there are now lots of mass-produced models, the show’s co-curator, Gebhart Blazek, promises that “a family-structured craft culture is still very much alive in Morocco… retaining its greatest strength – the playful creativity at its core.”

Also catering to a growing international audience is Palm Springs store Soukie Modern, with a collection of both vintage and modern boucherouites (priced around $30 per sq ft), including designs by co-owner Taib Lotfi, a self-described “rug addict” of Berber descent. Revival Rugs (with operations in the US, Turkey, Morocco, and India) began buying vintage boucherouites in 2019, inspiring a new “Denim” range (from $109). “Rag rugs solve many of the questions we ask before we bring something to market,” says co-founder Ben Hyman. “Is it beautiful? Is it useful? Is it good for the environment? Does it carry cultural heritage?”

Betty Wood has discovered closer ties to her Northumberland heritage through a recent turn to weaving – a prompt for her father to share stories of his own grandmother’s rug-making. Now based in Toronto, Wood draws equally on the illustrative rug-hooking heritage of Nova Scotia, including floral motifs and scenes of Atlantic fishing life. Her hung pieces (from C$750, about £480) are “the antithesis of fast culture: slow, labour-intensive art”, she says. “It’s easy to get lost in loops of yarn or the ASMR of cutting fabric strips.”

Detroit-based artist Eleanor Anderson has also elevated the rag rug to the gallery wall. She uses a double-weave method on a floor loom, transforming strips of cotton and filled fabric tubes into a 3D patchwork extending up to 15 feet. “I like to work at an architectural scale,” she says. In the age of screen culture, “people’s eyes are hungry for a human hand at work”.

Galvanising the hands of thousands of rug-makers around the world is Reclaim the Void, a work of cultural activism with the Ngalia people of Australia’s Western Desert: “a country pockmarked with holes… where the injury in the earth stays forever”, says the project’s cultural custodian, Kado Muir. Set to be installed in 2024, Reclaim the Void aims to cover an extinct mining pit with thousands of circular rag rugs, stitched together to recreate an original indigenous painting. 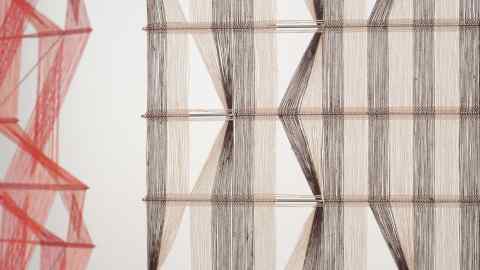 “We’ve been slow to acknowledge the pain done to our indigenous brothers and sisters,” says creative director Vivienne Robertson. “So we’ve offered people an everyday way of saying sorry that’s very accessible – everybody has a sheet in their cupboard. The project is symbolic.” The rag rug has never wielded greater soft power: to comfort and unite, to protect and seal – and even to heal.