The greatest show on Broadway... is Jordan Roth

The Tony award-winning producer, theatre heir and couture hound is shaking up the Great White Way, frock by frock

August 2022. Mid-morning at the St James Theatre, New York City. Outside, a billboard announces the show Into the Woods, the hot-ticket revival of Stephen Sondheim’s musical fantasy set in the world of fairy tales. Inside the theatre, a character walks onto the stage, long dark hair pulled back into a tight twist. Geometric lines are taped across the forehead of a pale face; lips are painted two shades of blue. The wearer is swathed in a cloud of couture created by Iris van Herpen, with white ribbons hand-stitched onto black glass organza panels, creating echoing faces that float around the body like ghosts.

This isn’t a character in the show, but its lead producer. Jordan Roth, 46, is, as well as the producer of sell-out Tony-winning Broadway shows, a theatre owner, a prominent LGBTQ+ advocate and a social-media fashion phenomenon. Tall, rail-thin, with cut-glass features, he is very much his own work of art. For a Manhattan screening of Baz Luhrmann’s Elvis he wore a fringed leather Alexandre Vauthier number topped with towering Priscilla Presley hair; the first night of Into the Woods saw him in a cascade of Olivier Theyskens, set off by a chainmail necklace by Fannie Schiavoni. A fixture at the Met Gala, he supports and wears both established fashion houses (Thom Browne this year) as well as new designers such as Harris Reed, Charles de Vilmorin or Ludovic de Saint Sernin. Nearly 100,000 followers on Instagram engage with his frank and ever-evolving relationship with himself, the theatre, fashion and his family (he is married to author Richie Jackson and they have two sons).

“I’m a huge fan of all of Stephen Sondheim’s work,” Roth enthuses the morning after his photoshoot, sitting on his bed at the family home in the West Village. His hair is pulled back in a ponytail and he wears a floral shirt by Off-White. His younger son, six-year-old Levi, is busy next to the bed getting into his policeman costume; Roth occasionally breaks off to assist. “For me, Into the Woods has a line for every moment in life. It’s like the Bible, it’s all in there,” he says in his gentle voice. “You just get to the right passage, the right line and it will heal you – and that is the magic of theatre.”

Roth is the son of billionaire real-estate investor Stephen Roth and theatre producer Daryl Roth; the St James is one of five theatres that he owns. It was after leaving Princeton, where he studied philosophy and theatre, that he found himself producing his first staging – The Donkey Show, an adaptation of Shakespeare’s A Midsummer Night’s Dream as a disco – which ran off-Broadway for six years. “It was never really the plan or the path,” he says. “I always thought I would be an actor, but I fell in love with the show and the people and that’s where my brain took me.”

It would be easy to pin Roth’s success on his deep pockets, but investing in the theatre is still a high-stakes game. And Roth has proved himself to be a very good gambler, filling his theatres with a string of hits, including Hadestown and Jersey Boys. For his 2000 Broadway revival of the Rocky Horror Show, he became the youngest-ever lead producer to be nominated for a Tony Award. By 2013, aged 33, he had become president of Jujamcyn Theatres and a major player on the Broadway scene.

The Broadway columnist Michael Riedel believes that Roth has brought “a sense of energy and youth” to the Great White Way. “He was doing more experimental kinds of shows, putting money into stories that he was interested in but that, let’s say, the other theatre owners might not find to be to their tastes.” These have included queer and disruptive shows such as Kinky Boots and The Book of Mormon, which went on to define popular culture. “He was also very early to understand that you could sell a lot of tickets to a much younger audience through social media than you could through traditional ticket sellers. That, along with the response to his personal image, has created a huge buzz in both him and his shows.”

Roth’s approach to dressing wasn’t always so expressive: he began his career wearing a uniform of black, blue or grey Prada suits, albeit with an untucked shirt and a buzzcut. “It was dressing how I felt the industry needed me to be to do my job,” he says. “I got stuck in a kind of uniform and I could feel it tightening around me and I didn’t know how to get out.” His emergence from his “chrysalis of convention” came one night in 2017, when he attended the Tony Awards wearing a cherry-red Gucci tuxedo with a bejewelled tiger on the back.

“I am on the committee for the Tony Awards and had been in a meeting with Anna Wintour about dressing the nominees, and she suggested I should think about wearing Gucci. I loved the idea, [but] when I saw that suit I thought it might be too much: ‘Who will they think I think I am?’ But when I put it on I remember looking at myself and I thought: ‘Yes, yes, yes!’”

It might be one of the most restrained pieces that Roth has worn since. “There is nowhere I would not dress creatively now,” he says. “I take it everywhere. By existing in the third space I have a whole audience who follow and engage with me. That is part of my art – would you expect a piece of art only to exist in a museum?”

Zac Posen agrees. The designer has collaborated with Roth on exuberant couture creations for the Broadway openings of Frozen in 2018, Moulin Rouge in 2019 and Funny Girl in 2022, where the two decided on a nod to Fanny Brice’s famous leopard coat. “I attended the Tony Awards this year – Jordan’s presence there was electrifying,” says Posen. He met Roth a decade ago when he was still dressing – “let’s call it ‘conservatively’. He had never really interacted with fashion before, and it occurred to me that it was a creative medium that he would really respond to.” The pair began to plan “how we could bring more of this to the world of theatre”. Eventually, Roth commissioned Posen to make the coat he wore to the Frozen premiere, and “he never looked back. Each time we have worked together he is 100 per cent involved.” 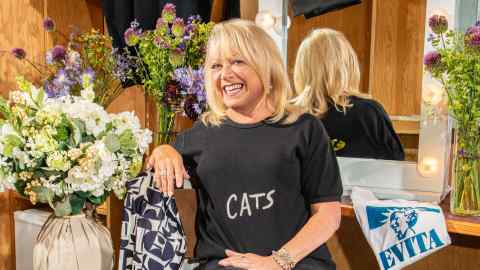 What next for this impresario of the extraordinaire? It’s been a tough time on Broadway in recent years. Roth, with his electrifying presence and canny instincts, will need to be at the top of his game to entice diminished audiences back in. “One of the things we learnt from being apart for so long is how much we need to be together sharing space and stories,” he says passionately. “Theatre is the primal place for doing that – so we are coming back just because of that need.” He will continue to champion young fashion designers, stage new shows and support philanthropic causes like God’s Love We Deliver, which serves meals to New Yorkers who can’t shop or cook for themselves, and Children’s Rights, which investigates and combats violations of children’s rights in America. But brand Jordan Roth is as much a part of the spectacle of Broadway as that which appears on his stages. To quote a line from one of his favourite show tunes: “I am what I am – I am my own special creation.”