The day after Donald Trump’s shock presidential victory, William Sandbrook, the chief executive of US Concrete, woke up to see his company’s shares rocket more than 12 per cent in the first three minutes of frenzied trading.

“It was interesting,” he deadpans. Mr Sandbrook had stayed up late to see futures markets initially shudder at the prospects of President Trump, and then become comfortable with the idea after an unexpectedly magnanimous acceptance speech. But the ferocity of the rally was a surprise. “I thought we’d have a good day, but I didn’t anticipate this,” he admits.

After the initial flash of panic, Mr Trump’s unlikely victory has electrified the US stock market, where investors are eagerly anticipating corporate tax cuts, regulatory loosening and an infrastructure spending spree. Companies such as US Concrete — which gets about 15 per cent of its revenue from infrastructure projects — were among the biggest winners. The Texan company’s shares are up almost a quarter since the election.

“Any stocks having to do with infrastructure spending have taken off regardless of underlying fundamentals in the hopes that a large fiscal stimulus plan is coming that will have us rebuilding all roads and bridges,” says Brett Ewing, chief market strategist at First Franklin Financial Services.

Much remains uncertain. But money managers have been heartened to hear that the incoming administration plans to stimulate the US economy through a proposed $1tn infrastructure investment programme.

The initial indications are that this will mostly consist of tax breaks designed to stimulate infrastructure investments rather than government projects. But Steve Bannon, Mr Trump’s controversial adviser, made clear in an interview with the Hollywood Reporter that small-government Republicans and fiscal hawks are going to be unhappy. 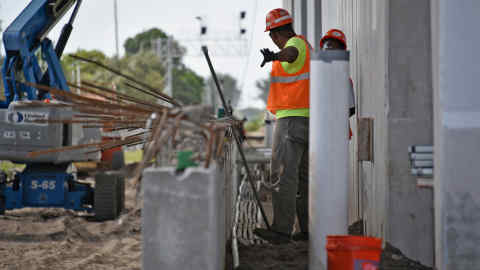 “The conservatives are going to go crazy,” he said. “I’m the guy pushing a trillion-dollar infrastructure plan. With negative interest rates throughout the world, it’s the greatest opportunity to rebuild everything. Shipyards, ironworks, get them all jacked up. We’re just going to throw it up against the wall and see if it sticks.”

Conservatives are not the only ones who might go crazy. While the stock market has responded positively to the prospect of economic stimulus, the bond market has been convulsed by concerns that the 30-year bull market for debt is coming to a grisly end.

Most analysts reckon that the US economy is running at around or close to full capacity, with the unemployment rate below 5 per cent and signs that wage growth and inflation are finally beginning to pick up. A hefty infrastructure investment package in such an environment would probably fuel inflation and force the Federal Reserve to raise rates more aggressively than previously anticipated.

Moreover, any tax cuts and extra spending would be financed by borrowing. When President Ronald Reagan did the same in the same in 1981, the US government’s debt load was fairly modest and interest rates were falling. Today, the gross federal debt-to-GDP ratio is more than 100 per cent, and interest rates are probably heading higher.

There are already clear signs that bond investors are unhappy. Global borrowing costs had begun edging higher this autumn, but shot higher in the wake of the US election. The 10-year Treasury yield — one of the most influential financial measures on the planet — has climbed from a low of 1.35 per cent in July to breach the 2.4 per cent mark last week, for the first time since mid-2015. The rest of the global bond market has followed suit.

Given that yields move inversely to prices, this has proved painful for debt investors. The Bloomberg Barclays Multiverse index, one of the broadest gauges of the global debt market, has lost nearly $3.66tn of its value since the beginning of October.

Nonetheless, there are reasons to believe that even if this is the end of the bond bull market, it is not the start of a bear market.

First, the details of Mr Trump’s infrastructure plans remain patchy. They mainly appear to revolve around tax breaks for private sector companies and contractors to encourage big projects, rather than direct government spending. It is doubtful whether tax breaks will be sufficient to encourage the private sector to repair crumbling but pre-existing infrastructure, such as roads, bridges, highways or water pipes.

Most analysts have, therefore, concluded that the building boost will be much smaller than touted. JPMorgan’s analysts expect only a cumulative $150bn increase in infrastructure spending spread over five years, a welcome but hardly game-changing shift.

Second, even if a spending spree does materialise, any bond market tantrum would probably, sooner or later, be quelled by the sheer amount of money sloshing around the financial system looking for safe and steady places to invest.

While the Fed might raise rates more aggressively than previously thought, global interest rates will probably stay low with the European Central Bank and Bank of Japan still flooring the monetary pedal. That means that institutional investors such as pension funds and insurers — which collectively control most of the world’s financial assets — will remain desperate for safe fixed income assets.