Diplomacy should not be a dirty word in the Ukraine war

Far from being mutually exclusive, fighting and talking need to happen at the same time
Gideon Rachman

Joe Biden is one of the few world leaders who will vividly remember the Cuban missile crisis. He was a student, almost 20 years old, when the US and the Soviet Union came to the brink of nuclear war. Now, as US president, Biden has half-mused, half-warned that the world is currently closer to nuclear Armageddon than at any time since the crisis that unfolded in October 1962 — exactly 60 years ago.

There has been some tut-tutting that Biden should not be saying such things. The argument is that by publicly discussing nuclear war, the US president is playing into Vladimir Putin’s hands. Russia’s president and his army are in an increasingly desperate situation. Western intelligence services believe that the Russians are running out of ammunition and that this has only recently become apparent to Putin. By threatening to use nuclear weapons, Putin is using one of his remaining tools — trying to terrify Ukraine and its western backers into concessions.

Biden, however, is not alone in talking publicly about the nuclear threat. Volodymyr Zelenskyy has also said that Putin is psychologically preparing the Russian people for the use of nuclear weapons. As Ukraine’s leader put it, this is “very dangerous”.

With the dangers of escalation mounting — alongside the death toll — the absence of serious diplomatic efforts to end the conflict is both striking and worrying.

For some of Ukraine’s most ardent backers, even talking about diplomacy amounts to appeasement. Their argument is that the only acceptable and realistic way to end the war is for Putin to be defeated. This is fine as a statement of principle, but not hugely helpful in practice.

Of course, it would be best if Russia were comprehensively defeated and a new penitent government came to power in Moscow — committed to paying war reparations and putting Putin on trial for war crimes. But that outcome, while just about within the range of possibilities, remains a very long-odds bet. For the foreseeable future it is much more likely that, as his options shrink, the Russian leader and his entourage will escalate further.

Russia’s options include economic pressure, indiscriminate bombing of Ukraine and sabotage of western infrastructure. But increasingly overt nuclear threats are also likely. The actual use of tactical nuclear weapons cannot be excluded. The frequency with which western leaders make reference to this and talk about possible responses — the latest to do so was France’s Emmanuel Macron — is a sign of the briefings they are getting in private.

In 1962, nuclear brinkmanship took place against the backdrop of secret diplomacy that eventually defused the Cuban missile crisis. That kind of diplomatic activity is the missing ingredient in the war in Ukraine.

The big mistake is to believe that diplomacy is an alternative to strong military support for Ukraine. On the contrary, the two approaches should go hand in hand and be complementary to each other.

Giving the Ukrainians the military help they need to advance on the battlefield puts them in the best possible position to secure their aims in an eventual peace settlement. But diplomacy should not simply be deferred to some point in the future. It needs to be going on at the same time as the fighting. And the Ukrainians have to be involved and consulted at every step.

Some western military leaders are frustrated that their efforts in Ukraine are not being supported by simultaneous diplomacy. As one senior military source puts it: “Military action is ineffective on its own. It’s only truly effective when it’s combined with economic and diplomatic efforts. And we’re not seeing enough diplomacy.”

Although some might assume there is more secret diplomacy going on than meets the eye, those who should know suggest there are few channels open with the Kremlin. Senior members of Biden’s team are believed to have spoken to their counterparts in Moscow. But the results have been less than inspiring, with the Russian side sticking to Kremlin-approved talking points.

Third-party diplomacy might be a more fruitful path. The model here could be the deal that was reached to allow Ukrainian grain to leave Black Sea ports, alleviating the global food crisis. Turkey played a crucial role in brokering those talks. Recep Tayyip Erdoğan, the Turkish president, is not everybody’s idea of a stable intermediary. But he has longstanding links in Washington, Brussels and Moscow.

The Indians are also potential interlocutors. Their failure to support resolutions condemning Russia at the UN has attracted plenty of unfavourable commentary in the west. But it may make them credible messengers in Moscow. S Jaishankar, the Indian foreign minister, is also a respected operator.

In the west, some who are thinking about an eventual peace deal lay out broad parameters. Russia must withdraw to at least where its forces were before the February 24 invasion. Ukraine must have its future as a viable state assured — with access to the sea, control of its own airspace and reliable security guarantees that are not dependent on Russian good faith. The status of Crimea will be the most difficult issue in any negotiation. But finding creative solutions to intractable problems is what high-level diplomacy is all about. We need to see more of it.

READ MOREWar in Ukraine: free to read
The 90km journey that changed the course of the war in Ukraine 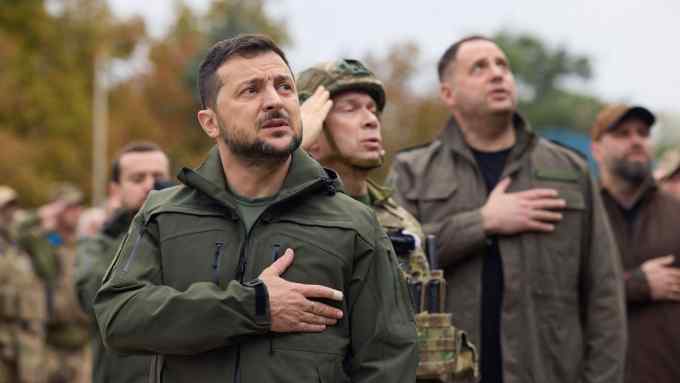