The Man In The Gray Flannel Suit lives on

In 1956, Gregory Peck made a grey suit famous as he wrestled with existential angst. Decades later, his son is reviving it

In 1956, Gregory Peck starred in the film adaptation of the bestselling novel The Man in the Gray Flannel Suit. Today, we could be forgiven for thinking that we have only recently started to be open about such issues as PTSD, work-life balance, mental health and the perils of materialism, but these were the exact issues treated by Nunnally Johnson’s film, in which Peck’s protagonist wrestles with the existential anguish of commuting from Connecticut to Manhattan. Or, as the New York Times put it in its review, “the complex accumulations of little pressures, crises and concerns that creep up on an average fellow trying to get along in this geared-up world”.

Peck’s understated two-button, smoke-grey Gray Flannel Suit became an internationally recognised symbol of white-collar wage slavery. It defined an entire socio-economic class and when, in 2016, LACMA held the exhibition Reigning Men: Fashion in Menswear, 1715–2015, it occupied a suitably important position. All of which explains why, one winter afternoon, I dropped into Huntsman on Savile Row for a fitting of the very same suit – but this time on Gregory’s son, Anthony. Nearly three-quarters of a century on, the famed grey, or gray, cloth is being copied and rewoven. To Anthony, now 66, working in concert with Huntsman’s head cutter, Dario Carnera, it’s the perfect way to continue his father’s relationship with the famed tailor.

“I believe his friend John Huston, the director, first sent him here,” says Anthony, who shares his father’s tall, lean, square-jawed presence. “His first movie commission was for The Million Pound Note [from 1954].”

It was love at first stitch. For half a century (he died in 2003), Peck had his clothes made at Huntsman, where the ledgers record more than 160 orders. Anthony recalls a man who was never less than impeccable: “When most guys are wearing jeans, my dad was wearing grey flannel trousers and a Huntsman tweed.” Yet if Anthony grew up in an atmosphere of male elegance (Jimmy Stewart, Cary Grant and Frank Sinatra used to drop into the Peck household, while David Niven was a neighbour in southern France), he admits he found Huntsman a bit sepulchral. “I was brought here for the first time when I was nine or 10, and I found it extremely daunting.”

He would probably never have darkened a tailor’s door again had it not been for a call from Huntsman in 2014; its owner, Pierre Lagrange, had heard of the fabled Peck clothing collection. “They asked if I would be interested in allowing them to do an exhibition of my father’s clothes – around 70 garments remained.” Gregory Peck: Style Archive of an Icon ran on Savile Row in 2014, and featured various highlights, including the dinner jacket the actor wore when he won an Oscar, in 1963, for To Kill a Mockingbird.

The well-populated Peck wardrobe offers an interesting insight into the development of the famous Huntsman cut. The earlier suits and sports jackets exhibit a conventional, slightly boxy cut and have two button fronts. Only after Colin Hammick was appointed creative director in the late 1960s and developed the famous slimline, hacking-jacket-style, single-button “crooked” coat, with natural shoulders, high armhole and flared skirt, did Huntsman acquire an identifiable look – a transition reflected in the star’s collection.

The 2023 Peck Gray suit is inspired by ’50s Hollywood, with a three-button front, no side vents and a less structured cut than usual at Huntsman, with more drape than normal to capitalise on the soft nature of the fabric. The look is more relaxed than many modern movie suits. The Kingsman franchise, for which the Huntsman shop has supplied both location and some costumes, favours a crisp, sharp silhouette and, famously, a double-breasted coat. Meanwhile, thanks to Tom Ford, James Bond has become identified with contemporary, close-fitting, stylised tailoring.

Anthony says he feels that submitting himself to the same lengthy ritualised procedure of selecting cloth and cut, and then returning for fittings, has brought him closer to his father; he finally understands the joy Gregory took in bespeaking clothes. His eyes shine with enthusiasm when he talks of the Fox’s mill where the flannel is now made. Peck and Huntsman plan to revive more items from the Peck archive. Top of the list is the famous checked overcoat worn in The Omen (1976), but this is taking time as it is proving extremely difficult to recreate the saturated vividness of two of the overchecks: a cobalt blue and apple green.

By contrast, the grey was relatively straightforward. Anthony invites me to compare the two suits side by side. Seven decades apart, the handle of the cloth is eerily similar, but I also notice that there is a slight herringbone in both, which I am unused to seeing in flannel. “That,” smiles Anthony, “is because it is a worsted flannel.” The Man in the Gray Worsted Flannel Suit? It’s probably too late to change the name now.

InterviewFashion
Edward Sexton on the past, present and future of Savile Row 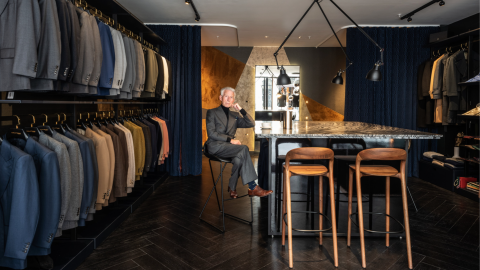