The local heroes of Balcaskie

“A beggar’s mantle fringed with gold” is how king James VI of Scotland (James I of England) described the ancient Pictish kingdom of Fife. The frayed cloak is a reference to the coastline of the East Neuk, with its “begging hand” that Fife holds out to sea in the hope that it will provide sustenance. The gold lining is the burst of lights from the fishing villages that sweep round from Leven to St Andrews.

Toby Anstruther, the dynamic founder of the Brompton Design District in South Kensington, comes from a family who have owned land here for centuries. While proud of the region’s agricultural and fishing heritage, he had always been baffled by the practice of harvesting local produce and transporting it elsewhere. Having moved up to Scotland to take over the family estate of Balcaskie in 2007, he wanted to inspire a different approach and, in 2011, co-founded Food From Fife, a network connecting and promoting the region’s food and drink producers. “It was an initial building block to re-establish a bit of pride,” he says.

Anstruther’s ambition for Balcaskie has been to create a place where people might benefit from his custodianship while tackling the problems of local food production, processing and availability. He wants to create a diversity of opportunity within his fiefdom that draws on different skills. “Whether it’s in the city or the countryside, the idea is the same,” says Anstruther. To this end, he has been working with Sam Parsons, Balcaskie’s estate manager since 2008, not only to evolve its farming practices, with a mission to be fully organic by 2022, but to create an environment where small businesses – and the community – can grow.

After arriving at the tiny train station of Leuchars, it takes 40 minutes to reach the imposing 17th-century pile that has been home to the Anstruther family for centuries. The house – its striking edifice made of pale-pink local sandstone – sits within 1,800 hectares of land and looks directly onto the Bass Rock, a volcanic island in the Firth of Forth. Its scale and ambition, informed by French baroque, is imposing, but also surprising given that it is well hidden and only glimpsed as you pass by.

It’s here that I am introduced to Di Gilpin, the founder and creative director of the eponymous knitwear label. In 2018 she moved her business from St Andrews to Comielaw, a clutch of former farm steadings at Balcaskie, which were repurposed six years ago to house eight studios. Other tenants include Rory Dowling, founder of Taran Guitars; the ceramicist Sarah Koetsier, who recently moved up from Cornwall; Lucy Parsons, a marine industry specialist and designer; and Keny Drew, a stained-glass-window designer.

For Gilpin, moving to Comielaw hasn’t made her any less ambitious. In fact, she and her production manager, Sheila Greenwell, say this is their most exciting work chapter to date. Both possess a “have a go” mindset, and Gilpin (whose hand-knitted pieces have found their way into Paul Smith and La Fetiche’s collections) has in the past two years put designs and wool in more than 30 US stores.

Her neighbour Dowling admits that at one time he would have felt compelled to move to the city, but finds he’s just as creatively challenged at Comielaw while enjoying a better quality of life. Dowling originally trained as a furniture maker but was drawn to the beauty of string instruments, using his wood skills to teach himself the craft of guitar making over several years. He now takes on up to 20 bespoke guitar commissions a year (priced from £11,200), as well as mandolins. One of the things he loves most about Comielaw is how easily ideas and problems are shared with his neighbours, who gather at a large outdoor communal table to discuss their work solutions during the summer months.

Parsons believes that the people that best fit into this community are the thought disruptors. “It would be far easier to find a couple of big businesses rather than a hundred tenants who are all very different in their own way. That requires more management, but if the past two years are anything to judge by, we didn’t miss a beat.”

For Sarah Hunter, a flower grower in her fifth season, the chance to rent a plot of land where there was the provision of local necessities has proved to be a godsend. “As a small business, if you had to set yourself up with vehicle access, a water supply – basically a farm building in a field – it would be prohibitive,” she says.

She’s been joined by daughter Connie Hunter and her husband, Tom Booth, who run the East Neuk Market Garden. Both are passionate about growing produce in a way that regenerates soil and improves biodiversity – and are just as committed to feeding locals who want potatoes and cabbage for dinner as she is growing salad leaves for chefs. They now provide up to 60 vegetable boxes a year from their two-acre plot, and intend to expand to four acres later this year. “We use organic straw from the estate, leftover grains from the brewery for compost, and bran from the mill for soil fertiliser. Instead of being in a field desperately trying to make it work, we are next to other like-minded businesses,” she says.

Building on the success of Food For Fife, Anstruther opened the Bowhouse in 2017, a small business food hub and monthly market where producers come together to sell to the community (and the odd tourist). Still only in its fourth year, it attracts around 4,500 people each market weekend – impressive, given that the population of the East Neuk stands at 12,000. At Bowhouse, you will find suppliers of fish, fruit, beer and meat.

Everyone at Bowhouse and Comielaw agrees that the camaraderie fostered in this corner of Fife has made their business greater than the sum of its parts. “Often there isn’t a blueprint for what I’m working on and the answer isn’t always the easiest route,” says Bowhouse manager Rosie Jack of her role at the hub. “That way of thinking harks back to my art school training and growing up on a farm.”

City folk are being lured back to the area too. Penny Martin, editor of the London-based Gentlewoman magazine, grew up nine miles along the coast in St Andrews and returned to the region during the first lockdown in 2020, buying a home in the burgh of Cellardyke, where she now lives full-time. She has witnessed a perceptible Balcaskie-effect. “It’s set the standard – you notice it in the menus and the decor, and there’s no doubt that world-class makers have made the area more seductive to people in the creative industries.”

Murray Chalmers, who owns the PR agency representing musicians such as Kate Bush, Coldplay and Radiohead, made the move back to Fife five years ago. He believes the sense of community nurtured here is stronger than any other in Scotland, thanks largely to its foodie focus and people like James Ferguson and Alethea Palmer who moved from London’s Rochelle Canteen to a tiny 17th-century inn at Kinneuchar to whizz up organic, locally-sourced meals. “They have been a huge draw and I have discovered other new initiatives through them, such as Darren Peattie’s East Neuk Salt Co, which is bringing back salt harvesting to the area after 250 years, and the Aeble Cider Shop.”

Half-gallery, half-cider store, Aeble was set up by Jaye Hutchison and her husband, who moved from Glasgow having been inspired by its innovators – particularly the Futtle organic brewery established by Stephen Marshall and Lucy Hine. Now based at Bowhouse, Hine and Marshall gave up corporate roles in large drinks companies to make their dreams come true in Fife instead. “The brewing and blending of natural beers reflect our location because the wild yeasts and fermentation connect everything we do,” says Hine of their business. Incredibly, the pair have also found the time to set up a record label, Futtle Records. “It does feel strange to be somewhere where so much is happening and yet it’s very rural.”

Having grown up in Fife before taking off to Singapore and Norway, Nick Fleming, a chemical engineer turned brewer, whose first job was building a factory in Utah for the reprocessing of fuel used on Space Shuttle rocket boosters, had always assumed the centre of the world was elsewhere. “It’s more recently that I’ve realised that this is such a beautiful part of the world – easy to get to and with such a vibrant community,” he says. Fleming set up Ovenstone 109 in a former tractor showroom outside Anstruther in 2017, where he produces handcraft ales. Word on the street during lockdown was that “St Nick”, as he became known, would drop off beers within the hour. 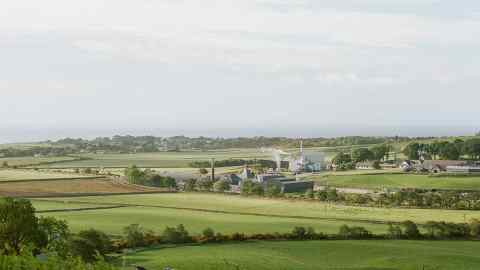 Lucy Parsons is keen to work with Fleming and those like him. She did a 10-year stint in finance in the City, and did 16 years of consultancy for ports, harbours and offshore energy in Scotland before deciding on a sabbatical and renting a space at Comielaw to develop her design ideas. She’s since set up the Tall Bed Company, catering to high-ceilinged rooms and tall customers. The supply chain is short: wool from a Balcaskie flock is used to upholster the bedheads, timber parts are milled in Glenrothes and loose covers are made with linen stockpiled from a recently closed linen mill in Kirkcaldy.

Parsons is thrilled that Fleming, given his background, might be able to help her extract lanolin from wool. “If you can do more than one thing in an urban environment people feel that you aren’t taking either skill seriously,” she concludes. “Whereas here, it’s very much the norm.”