The world’s his stage: on set with David Rockwell

The designer and architect is an expert in turning everything, from outdoor dining to the Oscars, into an escapist moment. Now he’s planning to send us to the future, too

There are certain designers whose work is defined by communal pleasure. David Rockwell, known for his Oscar ceremonies, airport terminals and theatre staging, is one of them. Which is why there is something jarring even about seeing the word “pandemic” typeset on pages of his new book Drama, let alone allowing the now-exhausting reality of it to come into his orbit. “I was editing the book at home thinking, ‘Am I writing the Old Testament here?’” he says. “Are people ever coming back together again?!”

Rockwell’s interiors and exterior arrangements are about manipulating, or, as he prefers to say, “choreographing and seducing” the audience. He creates escapism, often in an ephemeral way, for an experience that lasts from a few minutes to hours. The fact that his return to the public arena is with the Smithsonian’s forthcoming landmark Futures exhibition is fabulously apposite. It is a World Fair for our strange times, taking over the whole of the 1879 Arts and Industries Building in Washington DC.

The show is split across nearly 32,000sq ft and into four sections: Futures That Unite, Futures That Inspire, Futures That Work and Past Futures. There will also be five installations by artists exploring these concepts, including a “space-time capsule” by LA-based Beatriz Cortez, inspired by Mayan and spiritual sculptures; a rewilding of a wildflower meadow via augmented reality by Munich-based Tamiko Thiel; and an iridescent architectural intervention entitled Expanded Present by South Korean artist Soo Sunny Park.

Inside the Futures That Unite space sits Devan Shimoyama’s forest-like installation, using thousands of Swarovski crystals, intended as an elegy on mourning and an ode to the power of hope in a time of racial violence and pandemic. African-American digital artist Nettrice Gaskins has created 11 portraits of “featured futurists” exploring the potential and ethics of AI.

“There’s been a huge national reckoning on equity,” says Rockwell of the past 18 months. “But one thing that has stayed the same in planning the show is that the future is pluralistic. And the exhibition is a journey that makes you an active participant. You see one object, then two others, and you have to work out what entices you.”

It has been a Herculean task to create this kind of show at this point in history. “It required every ounce of creativity from David and his team,” says Rachel Goslins, director of the Smithsonian’s Arts and Industries Building. “We have asked them to pivot so many times they could teach a masterclass at the New York City Ballet.” While there will be “back to the future” historical artefacts, and – as with every World Fair – conceptual objects that may or may not one day become commonplace, the focus is on visitor engagement. “So much technology, as you can see from people with their phones in the street, distances you,” says Rockwell. “Futures adds a layer of technology to an exhibition that, as you walk through the spaces, lets you see your ideas in relation to the ideas of other people who have been there.” Essentially, Futures has a “choose your own adventure” dynamic, which is the underlying message of the show.

Design is formed by problem solving. We created self-contained spaces that made people feel safe”

Rockwell goes deep on narrative with an interior, even if it’s not instantly apparent. “All of the projects I’ve worked on with David include design elements inspired by Japan,” says Nobu Matsuhisa, for whom Rockwell has created numerous restaurants. “I’m constantly reminded of my country and its natural beauty.”

Similarly with restaurateur Danny Meyer. “It’s easy to assume he does a Rockwell stage set no matter where he goes,” says Meyer. “But he is always listening. I remember him asking me, ‘What is one of the things in Rome that gives you the greatest sense of place?’ And I said it was the marble floor of the Pantheon. He took that image and ran with it for the interior of Maialino.”

Storytelling is inherent in every Rockwell project, but it’s not a monologue. From his staging of The Rocky Horror Show in New York, in 2000, to the recent production of Hairspray in the West End, via offbeat immersive theatre, Rockwell is a master of detail and collaboration.

“When I designed Hairspray, I researched everything I could about the mid-1960s,” he says. “I went to Baltimore and took a tour of the city with John Waters, who made the original film. When I had my first meeting with the show’s director, I brought along way too many designs, for every solution imaginable. The choreographer studied them and said, ‘Why don’t we take every board out apart from the things that make you fall in love with the lead character and see things from her point of view?’ It was finding that moment of empathy that comes closest to what I think is now my core principle or DNA.”

Rockwell’s work can have a poignancy that belies his reputation as a showman. For a 2011 staging of Larry Kramer’s The Normal Heart, he created a space illuminated by the names of individuals lost to Aids. The central name projected on one of the actors was that of Rockwell’s brother, Rick. There was a similarly personal attachment to a project he was asked to do four days after the terrorist attack of 9/11. He was called by the headmaster of a local school and asked if his studio could create a temporary school for students of PS 234, displaced by the disaster. “They asked if I could make it less terrifying for the kids to come back,” he recalls. “I had a young son myself, and I felt it was a cathartic thing.” He went on to create the temporary viewing platform at Ground Zero with architects Kevin Kennon, Elizabeth Diller and Ricardo Scofidio. “It had been proposed by the city as a VIP viewing platform, which we refused.”

Rockwell’s most recent pro bono project was DineOut NYC, which he worked on with the NYC Hospitality Alliance to create outdoor dining spaces and keep restaurants in business while indoor dining was still banned. And at the same time as New Yorkers were eating in unusually low-fi Rockwell-designed dining spaces, the designer was working on the 2021 Oscars. He has a long history with the Academy, having created the Kodak Theatre in 2001 (renamed the Dolby Theatre in 2012), specifically for the annual Awards. He went on to design the ceremony itself in 2009, 2010 and then this April, where it was moved to Union Station – the backdrop for Hollywood productions including Blade Runner and The Dark Knight Rises. Rockwell had to create an auditorium that, because of local conservancy rules, couldn’t involve anything being attached to the floors, walls or ceiling. “The building is a mash-up of Streamline Moderne and Art Deco, and has heroic tall spaces that could coexist with an installation,” he says. “Design is formed by problem-solving. We created self-contained spaces that made people feel safe, and because of the windows, the passage of time was apparent during the show – from day to night – which is radical for TV that usually depends on totally controlled and lit conditions.”

Lighting is at the heart of everything Rockwell does – and will do. From sets to dining rooms and full theatre auditorium designs, he uses it to pull focus to what is important. He says he first learned about its power as a child, growing up in Mexico. “So many structures there are built to play with the quality of the light,” he says. He interned for a summer on Broadway in the 1970s, which changed his ideas about design. “It was on The Crucifer of Blood, and I remember a moment where all you saw was a shaft of light coming through a rose window on the floor. I started thinking about lighting providing direction as much as colour.”

HTSI
Rose Uniacke: at home with the queen of serene 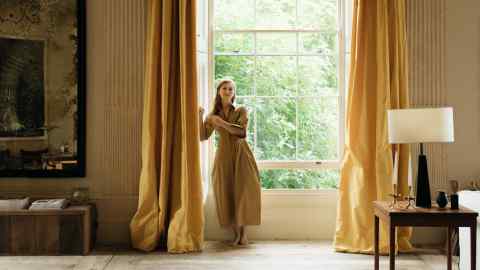 In recent years, Rockwell has spent time focusing on his piano as much as drawing boards. He says it is meditative and wants to hone his skill through his 60s. He has been mastering Bach, Brahms and Chopin and worked with a teacher who, he says, has changed his life. “It’s opened up a lot of observations about my relationship with design,” he says. “In classical piano you have what is termed ‘voicing’. You’ll be playing 10 notes above in the Brahms piece, you’ll play twice through, and the melody will be in different fingers as the composer decides what’s the lead voice of all those voices. For me, lighting is my lead voice. It’s the voice that allows you to feel comfortable, separate or together.”

Futures will be showing at the Smithsonian, Washington, from 20 November to 6 July 2022; aib.si.edu