Up-and-coming galleries to look out for at Tefaf

Rising art dealers are joining the fair, and making all the connections they can

New galleries may not be able to afford to take part in major international art fairs, but they also can’t afford not to. “You need visibility,” says Ludovic Marock, who worked at Sotheby’s and Christie’s before opening the Zurich-based Plektron Fine Arts in 2016. “You have to weigh up what’s best: sitting in your gallery and meeting no one or going to a fair, spending a lot of money and hoping it pays off.”

Marock is one of five dealers who have been selected to participate in this year’s Showcase section at Tefaf Maastricht, alongside Tafeta. It acts as a springboard for newer galleries — inviting them to exhibit alongside household names, meet private collectors and leading cultural institutions, and simply experience the buzz of a big fair. The total fee is €8,500 — as opposed to €11,500 plus €565 per square metre for galleries in the main section — and covers basic organisation, marketing and promotional activities, as well as tickets for guests. Of course, dealers want to present the best booth they can, which often ramps up the price. “I hired a designer to help with mine,” says Marock, who suspects that once he’s factored in shipping, travel, accommodation and so on it will cost him €30,000- €35,000 to participate.

A dealer for whom fairs are more about making connections than selling is the Warwickshire-based collector-turned-dealer Runjeet Singh. “It’s about planting a seed,” says Singh, who has had several viewers go away empty-handed, only to become regular clients months later. “I can sell my inventory to existing clients — that’s not a problem,” he adds. But he does admit that his area — Indian, Islamic, Tibetan and Chinese art from the 15th to 19th centuries — is unfamiliar to many people. The challenge is finding a new audience for pieces such as a 17th-century dagger made during the Mughal empire under the rule of Shah Jahan (the man behind the Taj Mahal). How does he justify the expense? “I think you have to put it down as a marketing cost.”

Tefaf isn’t alone in its efforts to remedy the expense of participating in a premier fair. Frieze has Frame, a special section that brings together emerging galleries. Art Basel recently introduced a sliding-scale fee system to provide relief to dealers with smaller stands. And Art Brussels has Invited, which — as it says on the tin — is an invitation-only section for young galleries forging new ground. You can see the logic: providing a platform for budding talent benefits the fair organisers by keeping the offering fresh and the customers coming.

For Fabienne Fiacre, a Parisian dealer who specialises in 19th-century French paintings, drawings and sculptures, appearing at Tefaf Maastricht is also about shaking things up. She opened her eponymous gallery in 2011 and has been quietly working away in Paris’s Saint-Germain-des-Prés. She only decided to apply after stumbling across a Facebook conversation involving Jill Newhouse, Jane Roberts and Guy Sainty about how few women were exhibiting this year. “I felt challenged, and Sainty kindly offered to recommend me,” she says.

For Fiacre, too, participating in a fair is about becoming part of a community of international dealers. “And doing good business,” she adds, “which means being able to continue dealing.” At Showcase she plans to exhibit works that show off her own taste for portraits emphasising line over colour — a style she describes as “Ingres versus Delacroix”. “Portrait of Adèle Anthoine-Prélart” (1847) by Hippolyte Flandrin, Ingres’ most talented pupil, shows a girl of 18 gazing out at the viewer, head slightly tilted to the right, eyelids heavy and pink lips pursed.

The lead exhibit from Turin-based Caretto & Occhinegro is “The Preaching of Jesus on Lake Tiberias” (1631) by Frans Francken II, a much larger piece. “It will be right at the centre of our stand, both geographically and conceptually,” says Massimiliano Caretto, who together with his co-founder Francesco Occhinegro is going big on Flemish and Dutch paintings at Showcase. Like Marock, they are working with a designer to make the most of their booth and this monumental painting of more than 60 figures gathered together on the shore.

For the galleries gathered in Showcase, it seems that visibility and access to top-tier collectors are too great an opportunity to ignore. Yes, it’s a big-money gamble, but a short-term loss might be worth it for a long-term investment. And in the diversity of its selection, it appears that Tefaf is looking to the future, too. 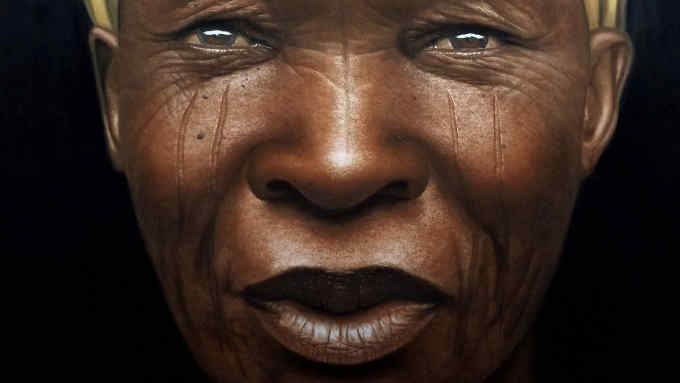