Johnson under fire over lockdown timing

Ex-science adviser says coronavirus toll could have been halved, while UK PM also faces bad news on testing and economy

Boris Johnson is facing renewed criticism of the government’s handling of the coronavirus pandemic after a former leading scientific adviser claimed Britain’s death toll could have been halved if lockdown had started a week earlier.

Britain’s official death toll stands at 41,128, while the total number of excess deaths — those above the average of the previous five years — has topped 60,000.

Neil Ferguson, an Imperial College professor and former member of the government’s Scientific Advisory Group for Emergencies, said locking down the country earlier would have “seen many fewer deaths”.

His comments to MPs came on a day of grim news for the government, with the OECD saying the UK’s economy was likely to face the deepest downturn among advanced economies. It noted that Britain entered lockdown “somewhat later than in neighbouring countries”.

The government was also dealt a blow by the Royal College of Pathologists, which warned that problems with Britain’s coronavirus testing regime had to be “urgently addressed” if the country was to develop an effective strategy for combating the disease.

Mr Johnson insisted it was “too early to judge ourselves” but the claims about the timing of the UK’s lockdown have added to a sense of anxiety among ministers and Conservative MPs over Downing Street’s handling of the crisis.

Ministers including chancellor Rishi Sunak want Mr Johnson to open up the economy more quickly, while MPs are dismayed that many children will not go back to school before the summer break.

One former minister said: “We could be in the ludicrous situation next month of having 18-year-olds in the pub and not at school.” A 14-day quarantine on travellers arriving in Britain is widely disliked by Tory MPs.

A former cabinet minister said the mood in the party was poor but not mutinous “yet”. One Tory MP said: “There's a leadership vacuum.”

Mr Johnson attempted to shape the agenda on Wednesday when he announced a new easing of restrictions to allow families to visit “lonely” relatives and friends. 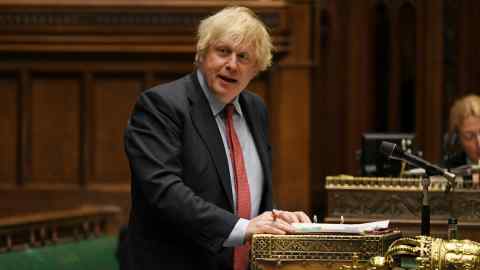 The prime minister said that from this weekend, single-adult households would be allowed to form a “support bubble” with one other household.

But the prime minister’s Downing Street press conference was dominated by the comments from Prof Ferguson, whose work at Imperial College was instrumental in persuading Mr Johnson to announce a lockdown on March 23.

Prof Ferguson, who later resigned for breaching the lockdown, told the Commons science committee: “The epidemic was doubling every three to four days before lockdown interventions were introduced.

“So had we introduced lockdown measures a week earlier, we would have then reduced the final death toll by at least a half.”

Mr Johnson insists he was guided by scientific advice on when to start the lockdown and Prof Ferguson admitted: “We frankly had underestimated how far into the epidemic this country was, that’s half the reason.”

Prof Ferguson added that advisers had not expected to see the number of deaths in care homes the UK has witnessed because it was assumed residents would be shielded. “That simply failed to happen,” he told MPs. 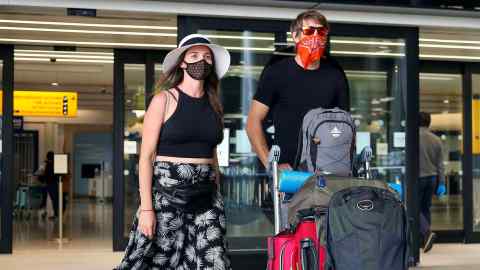 Mr Johnson said the government would examine its own record and learn the relevant lessons but that it was “premature” to make judgments while the pandemic was still not fully contained.

An eventual inquiry into the crisis will raise awkward questions for Mr Johnson and his advisers about why community testing was ended on March 12 and why Britain trailed other European countries into lockdown.

Mr Johnson also confirmed that all Britain’s shops would be able to reopen on June 15, but he has rebuffed attempts by ministers to bring forward from July 4 the date for the opening of outdoor hospitality venues.