There’s nothing new about tomorrow’s city

Cities, belching pollution, clogged with traffic and stuffed full of the buildings that are responsible for nearly 40 per cent of energy-related CO2 emissions, always appear as the villains of the sustainability narrative. They consume more than 75 per cent of all natural resources; they produce more than 50 per cent of global waste. They are monsters. Yet they are also, perhaps paradoxically, the most efficient and, potentially, the most sustainable way to live.

Cities can be compact and reliant on efficient public transport rather than cars; they can be walkable and cyclable; and, thanks to the proximity they foster between people and services, they can achieve impressive efficiencies in energy use. Even cities with harsh climates such as Oslo or Helsinki can develop communal heating systems as a byproduct of power generation that are clean and efficient compared with, say, the individual gas boilers that are the norm in the UK.

If the circular economy is about moving beyond a “take-make-waste” model of consumption, buildings can be a conspicuous case in point. Just look at two recent French housing projects, Tour Bois-le-Prêtre in Paris and Cité du Grand Parc in Bordeaux, designed by architects Lacaton & Vassal and Frédéric Druot. Both go radically against the conventional practice of demolishing old, nominally inefficient housing to build anew in more fashionable forms. Instead, they have managed to preserve existing social housing infrastructure and to keep tenants in place while transforming their slab blocks with a new outer layer of structure.

Boasting new terraces and winter gardens, formerly tired apartments now seem distinctly chic. No less important, both interventions conserve the huge amount of energy embodied in the existing structures; according to a report last year from think-tank Chatham House, cement production accounts for 8 per cent of the world’s annual CO2 emissions — which, if it were a country, would make it the third-biggest emitter, after China and the US.

There are harder-to-quantify savings too: new construction often tears apart established communities, disrupting the networks that facilitate sustainable city living through small exchanges of favours and chores, through trust and company.

Cities are the most efficient and, potentially, the most sustainable way to live

When the original tower blocks were conceived and built, in the 1950s and 1960s, architects were in thrall not only to concrete but also to the car. Motorways, flyovers and car parks swept old buildings aside. Yet cars proved to be disastrous for cities, enabling the vast expansion of the suburb and the exurb, which are radically unsustainable — not just in their distance from places of work and leisure, but also in their failure to build communities.

“Mobility is the first problem,” says Malo Hutson, associate professor of urban planning at Columbia University in New York. “Not just the electrification of cars, but also of marine transport, perhaps even aviation. We need to approach the city in a different way — how do we not build huge parking lots and [how do we create] more compact cities?” Autonomous cars may change things for the better, he thinks, as they could readily lend themselves to sharing schemes; that in turn could reduce the need for parking spaces and allow more efficient land use.

But overcoming the consequences of decades of sprawl is a formidable task. The changes required are so huge that advocates are careful to frame them as a positive not only in terms of sustainability, but also in terms of economic growth. The “Green New Deal” sponsored by congresswoman Alexandria Ocasio-Cortez in the US is exactly such an attempt at reframing green imperatives in a Rooseveltian image, as a boost to the economy rather than a brake.

House & Home
Architectural salvage: antidote to the age of bling 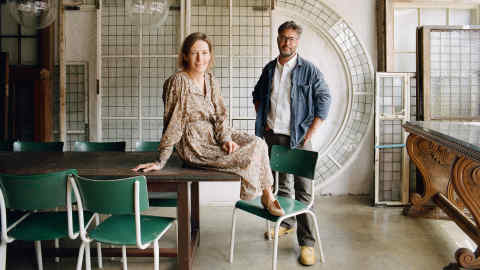 “We need an honest conversation about this,” Mr Hutson says. “There will be job losses and huge changes but also opportunities around construction and housing, new skills and innovation.” A 2016 World Economic Forum report notes that 40 per cent of solid waste in the US derives from construction and demolition, and represents “a significant loss of valuable minerals, metals and organic materials” that could feed into a circular economy.

Perhaps the most interesting shift currently under way in urban thinking picks up this thought and runs with it. An EU-sponsored initiative known as Bamb — Buildings as Material Banks — aims to change the construction industry’s approach to demolition, construing it as not a destructive but a constructive process, in which buildings are picked apart, their component parts and materials reused. Bamb wants buildings to be designed with this in mind; it advocates the use of “material passports”, which reside on a digital platform and “define materials and show their circular pathways”, their loops of use and reuse.

“There is a change of attitude in taking down existing buildings, with buildings conceived as banks,” says Georgia Price, an architect from global engineering group Arup. “We could be using materials passports, tracking and tracing materials through their life.” One possibility is to embed RFID chips in construction components, enabling them to be tracked from factory to building site to salvage depot. So far it is an idea that has gained little traction within the industry. The resulting database would be enormous — and who would own the data?

Meanwhile several new non-profits are already trying to salvage materials from buildings before demolition and to sell them on — at a fraction of their cost when new — to architects with an interest in sustainability and an eye for a back-story. Among them are Rotor Deconstruction in Brussels and the School of Architecture’s “Bank of Materials” in Aarhus, Denmark. Both are beginning to scale up to offer a real choice to architects and contractors.

One crucial recent piece of legislation from the EU may accelerate the change in attitudes. In October, “right to repair” rules were introduced, which put the onus on manufacturers to design products capable of being repaired, instead of succumbing to planned obsolescence, the dubious design philosophy that became prevalent during the US postwar boom. If our expectations of washing machines and phones can change, perhaps they will similarly change regarding buildings and infrastructure.

In those latter cases, the ability to reimagine will be as important as the ability to repair or rebuild. Perhaps the seemingly defunct architectures of the recent past can be repurposed in the same way the industrial buildings of the 19th and 20th centuries have been made into lofts, galleries and restaurants. A multistorey car park may seem the least adaptable of building types, yet one example in south London, Peckham Levels, has been reimagined as a cultural space, with artists’ studios, social enterprises, restaurants, and a now famous rooftop bar. Could similar ideas be applied to the ghost shopping centres and strip-malls of fading suburbs? Could they accommodate small workshops, markets, and hydroponics farms — enterprises that could densify those suburbs into places of production and change, rather than just dormitories?

According to a report by Arup, in a circular city, “products and assets are designed and built to be more durable, and to be repaired, refurbished, reused and disassembled”. That will require a fundamental change in approach by planners and architects, and by the citizens they serve.

Yet in a way, it is all rather old fashioned. When imperial Rome collapsed and its buildings gradually succumbed to violence or neglect, the stones were taken and reused to build houses and churches, wells and piazzas. The fragments are still there.

Explore the Special Report
READ MORE
Can we overcome the curse of the single-use sachet?