In its second outing, the event welcomes new galleries and devotes room to the city’s energetic younger art spaces

Much like second albums, second editions of well-received art fairs can be tricky to pull off. So, despite some miserable weather last year, the success of the first Frieze Los Angeles has raised the bar for its second outing this week.

Last year’s event broke the mould, with only 70 gallery exhibitors — much smaller than at similar calibre fairs, including its own (by contrast, Frieze has announced 200 galleries for its next New York edition). In LA, where the art market is still emerging, the fair was also unusual in giving almost equal weighting to the projects, local creatives and the food and drink vendors in the Paramount Studios backlot as to the commercial galleries inside the tent.

The same goes for this year: again, visitors are able to get a ticket that skips the commercial gallery tent — full price “programme-only” tickets are $25, versus $125 for both parts of the fair.

For 2020, newcomers to the backlot include Frieze’s majority owner, the media conglomerate Endeavor, which brings a curated project called “Out of Bounds” that will show work by artists who are in custody at the city’s California State Prison.

Inside the tent, not much has changed for this second edition — though there is the segregated “Focus” section at the back, for LA-based spaces that have been open for 15 years or less. Most art fairs demarcate younger galleries in this way, and here it has given room to more of Los Angeles’s energetic art spaces. Overall, most of the fair’s original exhibitors will return this year (just seven of the 2019 contingent will not be back) while the 12 newcomers, including four more in the Focus LA section, will provide additional flair.

Among the new blue-chip exhibitors is South Africa’s Goodman Gallery, which now boasts Jo Stella-Sawicka, previously Frieze’s artistic director, as director of its recently opened London space. Ever loyal to the fair, Stella-Sawicka suggests there are many advantages to joining the fray in LA this year: “The relatively small size of the fair encourages broader engagement, in a city with very strong museums,” she says. She hopes that Goodman’s offering will prove distinct. “The fair is rightly focused on the North American scene, but as the only gallery from Africa, we can add a bit of the international market to the mix.”

Stella-Sawicka compares Los Angeles to Johannesburg and Cape Town. “The political history of LA is complex: you can feel it in the [more sprawling] geography, just as in South Africa,” she says. “It’s also a place that isn’t just about a market opportunity — there’s engagement with art and artists on a more grassroots level.”

Goodman Gallery will show works that include paintings by two emerging Zimbabwe artists, Misheck Masamvu (works priced at $18,000-$30,000) and Kudzanai Chiurai ($25,000-$100,000). Both have a big year ahead, as Masamvu features in the Biennale of Sydney (March 14-June 8) while Chiurai will be included in a show at Paris’s Palais de Tokyo (Ubuntu, A Lucid Dream, June 19-September 13).

Goodman Gallery also brings photographs by the Iranian artist Shirin Neshat, whose solo show will have its final week at Los Angeles’s The Broad museum (to February 16, and opening at the Modern Art Museum of Fort Worth from February 12).

Another heavyweight newcomer is Skarstedt Gallery which, despite recently losing the artist George Condo to Hauser & Wirth, has committed to supporting the secondary market for Condo and will bring work by him to its booth. On the primary market, the gallery’s fare will include a new oil painting by the American artist Eric Fischl, “Toward Days End: Looking Back” (2020, $650,000), a beach scene that will perhaps appeal to the LA crowd.

“There’s an interesting group of new collectors in Los Angeles,” says Bona Montagu, a partner at Skarstedt. “They may not yet be all as established [as elsewhere in the world], but I suspect they could become very significant in a short amount of time.”

On the money, too, is another newcomer, Max Hetzler gallery, which brings a solo booth of colourful works by the 40-year-old Norwegian artist Ida Ekblad. They are priced between $40,000 and $200,000 — a comfortable level for Frieze LA’s burgeoning buyers. Ekblad is less well known in the US than in Europe, and the gallery hopes to build on the success of her recent exhibitions at Kunsthalle Zurich and in Mexico City’s Museo Tamayo. 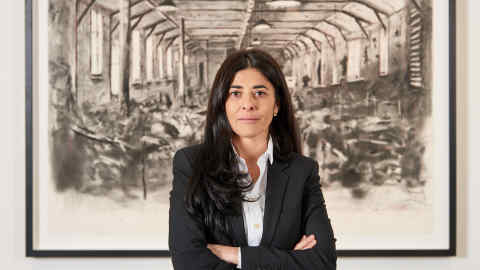 Gallerist Max Edouard Hetzler believes that there’s more to Frieze LA than making sales, noting that gallery artists including Charles Gaines, Liz Larner and André Butzer live in the city. “Seeing our artists, meeting collectors for the first time, or being able to follow up a lead because you are at a fair can be as important as selling art.” Local spaces are also joining the fray, some for the first time. Charlie James, who runs a gallery in Chinatown, brings a solo booth of work by the LA-based artist Gabriella Sanchez (works are priced at $10,000- $20,000.)

Banners and signs by Sanchez are also among the backlot Frieze Projects this year. James says he is “thrilled” to show at the fair, and that “presenting our artists in this context confers a great deal of esteem to our programme.” He says the fair has stimulated the local scene, encouraging “other high-quality satellite fairs”, such as Felix.

The second edition of Frieze LA has one difficulty: soon after it’s over, director Bettina Korek will be leaving Los Angeles to become chief executive of London’s Serpentine Galleries. But James is confident that Korek’s legacy is in place. “It’s all served to put LA firmly on the art world calendar,” he says. Plus, the weather forecast looks much better than last year — at least at the time of writing.