A cyclone that sweeps through Jamaica, a typhoon that hits China’s Greater Bay, an earthquake that damages Google’s facilities in California — just a few examples of the growing range of hypothetical events that investors are queueing up to underwrite.

Catastrophe bonds were first created in the 1990s as a niche form of risk transfer from insurers to investors. They have expanded steadily to a market of more than $30bn in terms of debt outstanding.

On one side of the trade are insurers, and increasingly other businesses and governmental bodies wanting to protect themselves against catastrophe-linked losses. On the other are investors willing to take on that risk with their own capital, in return for regular interest payments and an investment whose performance is not typically correlated with mainstream assets.

The climate threat is proving a catalyst in what is set to be a second successive year of record issuance, bankers and investors say.

“There’s just a need for risk transfer because everyone is realising, or being forced to realise — by rating agencies, or shareholders, or regulators — that there is a lot of risk that is not being managed,” said Peter DiFiore, managing director at asset manager Neuberger Berman.

Beneficiaries joining the market over the past 12 months have included the state of Jamaica — helped by the World Bank to become the first Caribbean nation to step into the “cat bond” arena — and Google owner Alphabet, which is using the bonds as a top-up to its traditional earthquake insurance. In recent weeks, the first catastrophe bond was issued out of Hong Kong, covering typhoon damage.

Paul Schultz, head of Aon Securities — an investment bank housed within the insurance broking group — said it is encountering “much more of a broad interest” away from the insurers and reinsurers that have traditionally parcelled off risk through these structures.

“We are [still] early days in this journey,” he said. “We will set new issuance records, for sure, this year, and we expect that momentum to carry over directly into 2022.”

Climate change is a key factor driving up natural catastrophe losses, according to risk experts. The sector’s hit from these was estimated at $40bn in the first half of 2021 — the worst start to a year in a decade. Analysts expect that impact to encourage both companies and insurers to want to share their climate risks with the capital markets.

“As an investor, I see uncertainty and climate uncertainty as probably one of the biggest opportunities that we’re likely to see in my lifetime,” said DiFiore. “As people become more concerned about these types of events and it rises up the ladder of importance for [chief financial officers] and risk managers, they’ve got to do something . . . I think that’s going to create, really, a lot of opportunity for groups like ourselves that are willing to take on that risk for a price.”

Some academics warn against taking that wager. “Betting against the environment is too risky for institutional investors such as pension funds,” said Claudio Morana, professor of economics at the University of Milano-Bicocca. He co-authored a paper three years ago that argued global warming risk was significantly undervalued by catastrophe bonds.

Meanwhile, valuation multiples — comparing bonds’ income to their anticipated losses — have shrunk over the years, according to an index from Artemis.bm, a specialist provider of information on insurance-linked securities.

“Yes, our market has tightened over the years, but nonetheless it is still relative value,” said Judith Klugman, head of ILS sales for reinsurance group Swiss Re’s capital markets division. That is partly because the “high-yield market is so incredibly tight”, she said, adding that for many investors the diversification benefit is the key draw. 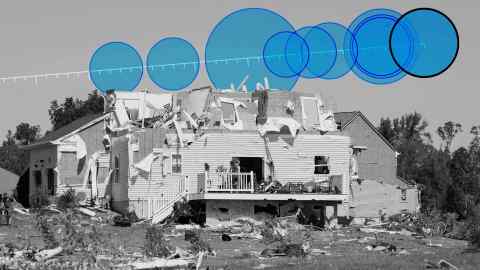 There remains a fear for some in the sector that a devastating year for natural catastrophes could spark investor flight. But investors and intermediaries say that the market has come through tough years such as 2017 and that decades of performance data allow for a more informed judgment of risk and return. Investors can pick and choose their risk, they say.

Neuberger Berman, for example, is currently steering clear of so-called secondary perils, historically lower-impact events such as wildfires and winter storms that have become much costlier in recent times. And this year’s catastrophes are feeding into higher prices for cover.

Those structuring the deals say that there is a market for almost anything. Aon’s Schultz said the diversity of issuers is being matched by diversity in the risks being borne — from peak perils such as hurricanes down to secondary perils — and how they are structured.

“There is a high willingness to assume risk in this market,” he said.