Brexit is an “acid test” of the future for global trade and “could go quite badly”, the Bank of England governor has said in his strongest warning yet on the risks of the UK leaving the EU without a deal.

Speaking to an audience of senior City figures in London, Mark Carney said the threat to the global economy posed by trade conflicts was greater than a financial crisis or a turn in the business cycle.

“We should not be under any illusions: no-deal Brexit would be a shock for this economy and send a signal globally about the prospects of refounding globalisation,” he said at the event, hosted by the Financial Times.

Asked whether Brexit was a canary in the coal mine for the new global order, Mr Carney replied: “The bird may be towards the bottom of the cage, but it is still fluttering.”

The governor’s comments came as Theresa May told MPs “we have to hold our nerve”. She said she was willing to take Brexit negotiations to the wire, in the hope of securing a revised deal that could win parliamentary approval.

Downing Street refused to deny speculation that the prime minister could wait until a European Council meeting on March 21 to secure a final deal, with MPs then being confronted with a “take it or leave it” vote shortly before Brexit day on March 29.

Mrs May said she was prepared to change the legislative rule book if there was a last-minute deal, to short-circuit the normal 21 days of Commons debate needed to pass such a measure. She refused to rule out a no deal Brexit.

On Tuesday night a cross-party group of senior MPs, led by Labour’s Yvette Cooper, published a bill to give parliament the power to stop Mrs May taking Britain out of the EU without a deal: a crunch vote on the measure will take place on February 27.

Meanwhile ITV news reported that Olly Robbins, chief Brexit negotiator, was overheard in a Brussels hotel bar saying he expected the choice for MPs to be either backing Mrs May’s revised deal or extending talks with the EU. Downing St declined to comment on “alleged remarks in a private conversation”. 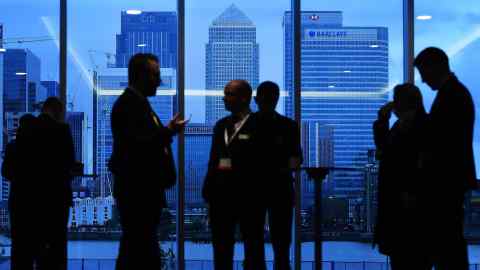 Mr Carney has repeatedly flagged up the damage being caused to the economy by the parliamentary stand-off on Brexit. “With fundamental uncertainty about future market access, UK investment hasn’t grown since the referendum was called and has dramatically underperformed both history and peers,” he said.

The world risked going down the same route, Mr Carney added. “A prolongation of global trade uncertainty could undermine the global expansion,” he said. “Contrary to what you might have heard, it is not easy to win a trade war.”

Britain’s bid to leave the EU was a “leading indicator” of the fundamental pressure to reorder globalisation, he added.

“It is possible that new rules of the road will be developed for a more inclusive and resilient global economy,” the governor said. “At the same time, there is a risk that countries turn inwards, undercutting growth and prosperity for all. Concerns over this possibility are already impairing investment, jobs and growth, creating a dynamic that could become self-fulfilling.”

Brexit was fundamentally about whether a compromise could be found between democratic accountability and economic co-operation, Mr Carney said, telling politicians that it was “imperative” to find an outcome that balanced sovereignty and openness.

As the UK enters its final weeks of EU membership, the BoE governor has begun to spell out more clearly the economic implications of leaving with no transition deal.

Mrs May tried to reassure business leaders on a tetchy conference call on Tuesday afternoon, insisting that the government was “very clear about the impact on business” of a no-deal exit.

But she frustrated executives by rejecting their calls for a delay to Brexit rather than allow a no-deal exit; Mrs May said she would not delay Brexit if MPs refused to back a deal because it would “just continue the uncertainty”.

Video: Mark Carney: The outlook for the post-Brexit global economy

The BoE put future rate rises on hold last week, citing the uncertainties around Brexit as well as the slowing global growth picture.

The “fog of Brexit” was creating tensions in the financial markets which the central bank needed to monitor, Mr Carney said last week, as the BoE downgraded its outlook for Britain’s economy to its weakest level for a decade.

The BoE last week estimated a one in four chance of a recession in the first half of 2019 and that was without knowledge of the latest data, which were significantly worse than expected.

But that was before economic data published on Monday highlighted the dramatic impact that Brexit was having on the UK economy: output has slumped and growth in 2018 was at its lowest level since the financial crisis.