Investors in Boeing were struggling to digest the latest setback for the group’s 737 Max aircraft on Thursday after it emerged that test pilots had found a new potential flaw in its flight control system, heaping further scrutiny on the company’s safety culture.

Shares in the aerospace group fell more than 2 per cent in an otherwise positive morning for the US equity market, amid signs of a further delay to getting the plane back into the skies. It has been grounded worldwide since a second deadly crash in March.

Southwest Airlines on Thursday said it would push back the reintroduction of the Max into its flight schedules until October 1, a month later than previously planned, cancelling about 150 daily flights, citing the “uncertain” return to service of the plane. Southwest is the largest 737 Max operator with 34 jets in its fleet.

And analysts at Jefferies said they would revise their previous assumption as to when Max deliveries would restart from the third quarter to the fourth.

“The recent request by the FAA for additional software changes before submission of the Max for certification adds a delay,” they said, adding they were removing the 126 Max aircraft they had previously forecast would be delivered in the third quarter.

Boeing and the FAA remained in talks on Thursday about the new flaw. The problem is understood to be separate from the MCAS anti-stall system implicated in the two crashes that killed 346 people. It surfaced when FAA test pilots were trialling Boeing’s updated system during simulator exercises. Pilots were trying to follow a set emergency procedure to bring the plane out of a steep dive triggered by MCAS.

The regulator told the company it wants it to correct the additional problem before it allows the aircraft to embark on a pre-certifcation flight — a formal test run that would allow the plane to be cleared to fly passengers again.

Two people briefed on the most recent development said during one exercise the on-board computer appeared to become overwhelmed, and it took too long for the pilots to be able to regain control. Another person said the test pilot decided commercial pilots would need “a few more seconds” to stabilise the plane.

Boeing is understood to be assessing whether it can be rectified through a software update or whether it would require a change in the hardware, something that could lead to a further significant delay.

The FAA said the agency “will lift the aircraft’s prohibition order when we deem it is safe to do so . . . On the most recent issue, the FAA’s process is designed to discover and highlight potential risks. The FAA recently found a potential risk that Boeing must mitigate.”

Separately, reports emerged in the Washington Post of what it said was a pattern of safety lapses at the aerospace group and alleged breaches of an agreement between Boeing and the FAA reached in December 2015 under which Boeing agreed to pay $12m in penalties and improve quality controls inside its factories. 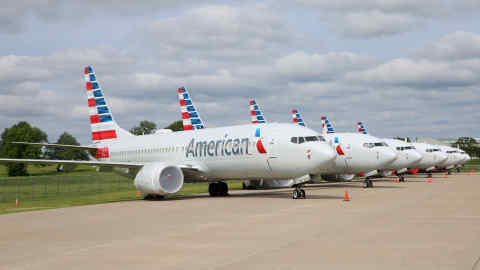 Boeing said in a statement that since the agreement was signed it had “worked with the FAA and invested significant resources to implement these improvements . . . Boeing is fully committed to meeting the rigorous standards reflected in the settlement agreement,” it said.

Airlines urged global regulators to co-ordinate their responses on measures needed to bring the Max back into service, following a meeting hosted by the industry trade body in Montreal. Alexandre de Juniac, director-general of the International Air Transport Association, warned on Thursday against a splintering of standards among aviation regulators.

Analysts said it was difficult to gauge the severity of the new flaw identified on the 737 Max and the potential impact on the timing of the plane’s return to service. Boeing has cut production of its Max models to 42 a month in the wake of the grounding of the aircraft and halted deliveries. It has had to resort to filling employee car parks at its base near Seattle with Max planes as the numbers mount up.

Get alerts on Boeing Co when a new story is published