For most of human history, ethical and governance concerns have not been a guiding light when it comes to funding the governments of the developing world.

Instead, the abiding ethos was summed up in a quote attributed to US President Franklin Roosevelt, who reputedly said of anti-communist Nicaraguan dictator Anastasio Somoza that he “may be a son of a bitch, but he’s our son of a bitch”.

Only after the fall of the Berlin Wall did the west start to insist that political leaders abide by standards of governance, in terms of clamping down on corruption or upholding environmental standards and social norms, say, in return for finance.

More recently, however, China has emerged as perhaps the pre-eminent source of funding for the emerging world as it has rolled out its grandiose Belt and Road Initiative. That will potentially complicate efforts to tie finance to behavioural standards, as China’s policy banks tend not to insist on such stringent criteria.

“Western DFIs [development finance institutions] are required to report on the social impact of their lending, such as the number of jobs created. They can’t lend to any sanctioned entities, there is a lot of emphasis on anti-corruption. The Chinese lenders have been less stringent about that,” says Jen Stolp, a Johannesburg-based partner in the banking and finance practice of law firm Baker McKenzie.

Beijing’s approach increasingly matters. With African power projects, for example, Chinese lenders have provided 53 per cent of DFI funding over the past decade, compared with 22 per cent from multilateral agencies and just 3 per cent from US institutions, according to the IJGlobal database.

Any suggestion of ‘western lending good, Chinese lending bad’ would be a gross simplification. The west has “made a lot of mistakes”, according to Kevin Gallagher, professor and director of the Global Development Policy Center at Boston University’s Pardee School for Global Studies. He points to the lending that helped create Africa’s sovereign debt crisis during the 1980s-90s, which led to massive write-offs around the turn of the millennium.

Charles Robertson, global chief economist at emerging markets-focused investment bank Renaissance Capital, says World Bank financing now comes with such extraneous box-ticking, that “you can’t build a road in Nigeria without saying how this is going to impact on young women”.

Chinese finance has other attractions to politicians too. “If you go to the World Bank it’s going to take more than two years to get approval to get a road built, checking the environmental stuff and the governance stuff,” Mr Robertson says.

“The Chinese say ‘you have an election in a year, we will do this now, it will take six months and you have got a road built.’ The finance is also cheap and much less onerous in terms of the related obligations.”

The dichotomy is particularly stark when it comes to financing power generation projects. Between 2005 and 2017 just 1.7 per cent of the World Bank’s energy-related lending was directed to coal projects and 30.8 per cent to wind and solar, according to calculations by Prof Gallagher and colleagues, as the bank responded to fears over climate change.

In contrast, 41.8 per cent of China’s funding was directed towards coal, and just 5.3 per cent to wind and solar.

“Coal is really an area where China hasn’t done its homework,” says Prof Gallagher, who believes many of these new plants will be rendered uneconomic by renewable energy within 20 years as the costs of the latter continue to fall.

Ms Stolp sees China’s support for coal-fired energy projects in a different light, however. “It is all well and good for western countries that have had the benefits of [coal-fired] generation for many years and have the luxury of moving gradually to more renewable sources,” she says. “But we have countries in Africa with big coal resources and they haven’t reached that level of electrification yet”.

More broadly, Prof Gallagher believes much of the criticism of China has been unfair, given that the west made plenty of mistakes in the past — with, for instance, money intended for development disappearing into the pockets of corrupt politicians. As a result, Chinese lenders that are still learning the ropes are being compared with reformed western agencies that have learnt lessons the hard way.

If there is a legitimate criticism, it is that Beijing “is not doing its due diligence on the mistakes [the west] made,” he adds.

Prof Gallagher also disputes the widely held view that rapacious Chinese lenders are happy to overburden poor countries with debt in the hope of seizing the underlying assets if they default, as happened with the Sri Lankan port of Hambantota. In 2017, China took a 99-year lease on the facility after Colombo struggled to service $1.1bn of debt, handing Beijing a strategic outpost on a key commercial and military waterway close to rival India.

“The People’s Bank of China is just as concerned about [its] money as any bank on Wall Street because a big chunk of their overseas assets is now held by countries that are in debt distress,” says Prof Gallagher. The bigger problem, he adds, is that “they had not thought through that what works in China may not work in [say] Zambia”.

Mr Robertson says there are signs that Beijing has become “more cautious in the last six months or so”, amid reports that its policy banks are growing wary of funding further rail projects in Ethiopia and Kenya, after previous Chinese-built lines failed to bring in the revenues expected.

Ms Stolp believes Chinese banks are stepping up their due diligence, causing a drop-off in lending, even as some western institutions are striving to become less bureaucratic.

Overall, there is a view that, despite some glitches, the surge in Chinese lending has been beneficial for the world.

“Chinese overseas development finance has the potential to help solve some of the world’s biggest development problems,” says Prof Gallagher. He adds that unless the west is “willing to put its money where its mouth is” and fill the infrastructure investment gap, it has little choice but to accept China’s involvement.

Get alerts on Foreign aid when a new story is published 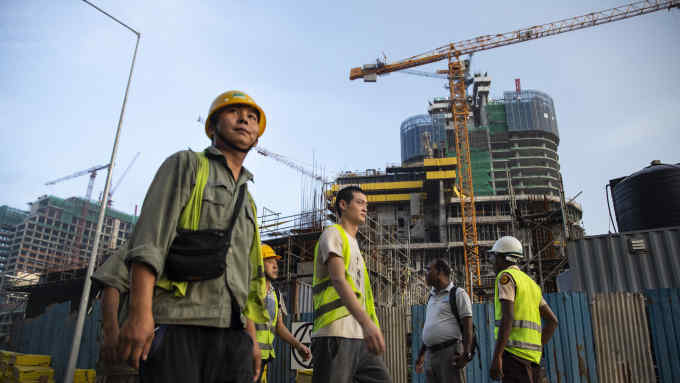