When Argentina splashed back into the international capital markets last month with the largest emerging market bond sale ever, Jamie Dimon, chief executive of JPMorgan, made a point of personally congratulating his staff on a job well done.

But in Buenos Aires the $16.5bn debt issue, led by JPMorgan and three other global banks, conjured up more mixed feelings — especially as Argentina has long had a turbulent relationship with Wall Street that is now being rekindled after a series of high-profile appointments in the new government of Mauricio Macri.

No bank is better represented than JPMorgan, with former employees including Alfonso Prat-Gay, the finance minister; Luis Caputo, the finance secretary; and Miguel Gutiérrez, the chairman of YPF, the state-controlled energy company. Others like Deutsche Bank, Goldman Sachs, Barclays and Morgan Stanley all boast former employees in high places in Mr Macri’s government, in stark contrast to an openly hostile attitude towards global finance under the previous populist administration of Cristina Fernández de Kirchner.

“It feels a bit like an old boy’s club here right now. There are a lot of Wall Street alumni running around,” said Walter Molano, chief economist at BCP Securities, an emerging markets broker, during a recent visit to Buenos Aires.

The proliferation of financially savvy officials in Mr Macri’s government lends it more credibility with bankers, a vital element in luring money back into an economy starved of investment after a decade of interventionist policies. For Mr Macri, investment is the key to unlocking the potential in Argentina’s economy, which is expected to contract this year.

“The market has been giving us a lot of credibility,” says one senior official in Mr Macri’s administration. “Everyone knows us, we are already a part of the community. So they listen to you, and understand you — many even agree with you. They couldn’t even understand the guys who came before us,” he said.

Wall Street became the nexus of an Argentine diaspora after the country became the most active emerging market in the capital markets during the 1990s. Other Argentines moved abroad after investment banks shut local offices following the country’s financial crash in 2001. Many went on to develop successful careers at banks such as JPMorgan, where several Argentines today hold key positions, such as Daniel Pinto, the head of its investment banking arm who is tipped as a possible successor to Mr Dimon.

“A lot of Argentines working abroad have decided to come back to do their bit to support this moment of change,” said an official who worked for a big US bank for many years.

It feels a bit like an old boy’s club here right now. There are a lot of Wall Street alumni running around

Like many of their peers in Latin America and beyond who have returned to work in booming home countries, Argentina’s incipient economic recovery has prompted many to come back to participate in the turnround of their country that was long branded as a pariah — just as the previous administration viewed “savage capitalism” with deep suspicion.

Indeed, writing earlier this year in Página 12, a newspaper that supported the previous government, Alfredo Zaiat ridiculed comparisons of Mr Macri’s cabinet with the all-star players of Spain’s Barcelona football club, in contrast with what many saw as a dearth of competent officials in the outgoing administration.

“Rather than Barcelona, they are demonstrating themselves to be a bunch of amateur players whose knowledge of financial affairs only serves the interests of their former employers,” Mr Zaiat wrote in a column entitled “JP to power”, referring to the US bank.

“You could write a book about Argentina’s relationship with Wall Street,” said Agustin Honig, managing director at AdCap, an investment bank in Buenos Aires. He recalls the 2001 crisis that brought down the government of Fernando de la Rúa, who was forced to flee the presidential palace by helicopter in the days before what was then the biggest sovereign debt default in history. 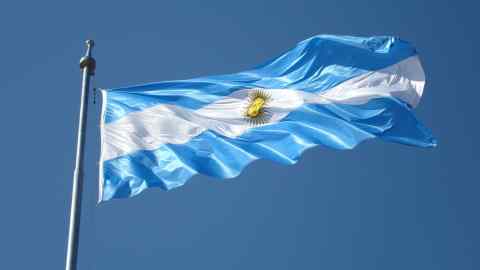 “De la Rúa’s government did whatever Wall Street told them to do and the country blew up. Over the last five years, they didn’t do anything that Wall Street recommended, but investors have been piling into Argentine assets,” he added.

The animosity between Argentina’s government and Wall Street may have subsided, but some observers worry that Mr Macri’s banker-heavy cabinet may not be so well equipped to cope with some of the real-world problems he faces. That includes unruly trade unions fighting to defend Argentines fearful of losing their jobs and struggling to pay their monthly bills as double-digit inflation bites.

“Markets are more rational and have been rooting for Argentina,” says Diego Ferro, an Argentine portfolio manager at Greylock Capital Management in New York. “So far things have been working out for the government, but they have been dealing with issues that come within their area of expertise — the financial markets. The real challenge starts now,” he says.