Hong Kong dean: ‘It is difficult now, but I haven’t abandoned my plans yet’

Despite challenging circumstances, CUHK’s business school has zoomed up the FT’s ranking

We’ll send you a myFT Daily Digest email rounding up the latest Masters in Finance news every morning.

Lin Zhou joined the Chinese University of Hong Kong (CUHK)’s business school with ambitions to broaden its international appeal, but seven months later the new dean has not left Hong Kong once.

Grounded by the global pandemic, which has spread across the world after erupting in mainland China, he admits: “It is difficult now, but I haven’t abandoned my plans yet.”

They will have been given a boost by his school’s performance in this year’s FT ranking of masters in finance (MiF) programmes: CUHK is the fastest climber, rising 19 places to number 30. Yet that achievement comes against a troubled backdrop, of which coronavirus is only a part.

For a while it seemed the pandemic had given the city a break from its existential political crisis, sparked last year by a stand-off between pro-democracy demonstrators and a government seen as too accommodating to China’s communist rulers.

But in the past few weeks the future of Hong Kong’s unique role under Beijing’s so-called “one country, two systems” rule has again started to look uncertain. 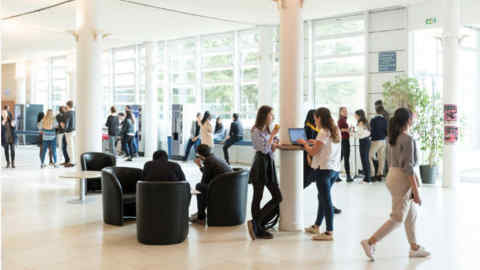 Protests have resumed following China’s decision to press ahead with a plan to impose national security laws on Hong Kong. In a riposte to Beijing, the US stated that it would no longer consider the territory autonomous from China, a decision that puts Hong Kong’s special trade status with Washington under risk.

Speaking just before Beijing’s move, Prof Zhou — who was born in mainland China but has become a US citizen — adopts a diplomatic tone when asked for his views on the situation.

“I hope that the Chinese government will continue to allow Hong Kong more freedom, including freedom of expression and the right to assemble peacefully, as long as national security is not jeopardised,” he says. “It will keep Hong Kong’s financial market an attractive venue to overseas investors, which is beneficial to the Chinese economy.”

Before he joined CUHK, Prof Zhou spent eight years as head of Antai College of Economics and Management in Shanghai, transforming it into a world-class institution that topped the FT’s most recent listing of schools in Asia-Pacific. Prior to that Prof Zhou spent 20 years in the US, holding academic positions at Yale University, Duke University and Arizona State University.

Watching relations deteriorate between the US and China, Prof Zhou argues Hong Kong’s role as an investment hub in Asia could grow if businesses became less willing to invest directly in China.

“When the relationship between China and the west cools down, Hong Kong’s role as an intermediary between [the two] will become even more important,” he says.

For universities outside Asia, the prospect of Chinese students losing their appetite for studies in Europe and the US could become a serious problem. The pandemic has accelerated a potential crisis, with uncertain visa prospects in the wake of lockdowns and travel restrictions for Chinese students — whom institutions worldwide have come to rely on for revenue.

Furthermore, Prof Zhou argues that the struggle to control the Covid-19 outbreak in many of the world’s top education destinations has left Chinese students considering whether leaving Asia will be safe. “We have actually seen recently that some Chinese students who had planned to pursue studies in the UK or US have decided not to go and applied to us,” he says.

Hong Kong’s oldest business school is, however, not immune to the economic downturn and the restrictions on international travel, which are making it hard for universities to predict future demand. With academic institutions gearing up to offer online-only teaching until campuses can reopen safely, prospective students are thinking twice about investing in a course.

Prof Zhou argues that not all programmes are equally vulnerable. Those thinking of leaving a job to pursue an MBA, where interaction with professors and peers is as important as coursework, may decide to postpone the risk.

The school is, however, counting on strong demand for pre-experience masters courses, as students try to postpone entering the labour market. In line with Prof Zhou’s ambitions, CUHK’s masters in finance, which offers courses focused on fundraising in Chinese markets as well as week-long field studies abroad, has become more popular with foreign students, albeit from a low base. The proportion has risen from 1 per cent in 2017 to 7 per cent in this year’s class.

But with many uncertainties still surrounding labour markets, the universities that supply them are bracing themselves for some hard years.

“Now Hong Kong, again, is different, because the Hong Kong government still provides lots of funding to universities in the territory,” says Prof Zhou, explaining that more than 50 per cent of CUHK’s finances comes from local authorities. He contrasts that with schools in the US and UK, “where funding from the state is decreasing at a faster rate”.

Reflecting on the uncertain future of Hong Kong and of universities everywhere, Prof Zhou argues that the world is in for many changes, with the US becoming inward-looking and the pandemic leading governments and businesses to “reassess globalisation”.

“Each country will have to decide whether it wants to do business with another country that has a very different ideological view,” he says. “Can economic issues be decoupled with political issues? Each country has to decide.”